Timbers with a sustainable timbre

How guitar makers and the timber industry are striking a chord for sustainably grown and harvested woods.

From concert halls and recording studios to factories, sawmills and forests, University of Wollongong (UOW) researchers Professor Chris Gibson and Dr Andrew Warren have been documenting this change by following guitar timbers back to the tree.

Dressed in bright multi-coloured shorts and T-shirt, with hair past his shoulders and three pairs of reading glasses on his head for magnifying the grain of timber, David Kirby isn't your usual lumberjack. The self-confessed conservationist-cum-forest worker-capitalist-eccentric wraps his arms around a giant tree, looks skyward and exclaims, "That's a magnificent one! There are a few hundred guitars in this one!"

Kirby, of Kirby Fine Timbers, is part of a small but important industry that is allowing the music industry to remain economically viable without completely destroying the thing they rely on: wood.

"We have been looking at guitar manufacturing worldwide, with an emphasis on acoustic guitars and sustainable timbers used in the manufacturing process," Professor Gibson says. 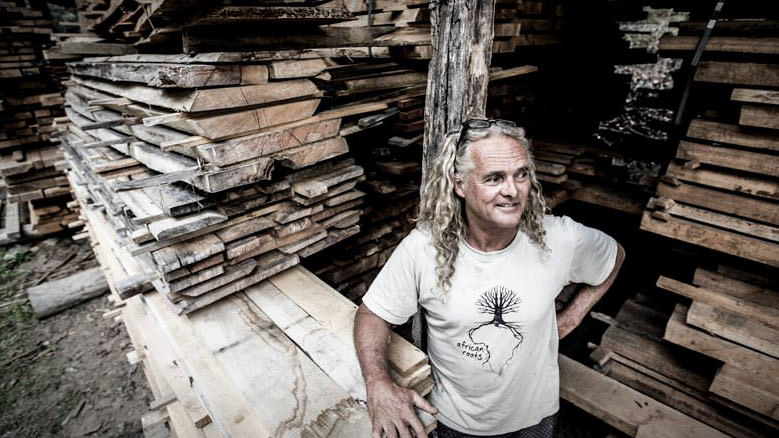 'Canary in the coal mine'

According to Professor Gibson, there is a growing demand for sustainable goods and services across Australia and around the world, and the guitar industry is no exception.

"Guitar makers know that the woods they've used for years are now becoming endangered and expensive. And they are quite willing to try out alternative woods in the guitar making process," says Gibson. "The guitar industry is like the canary in the coal mine; with climate change and resource scarcity looming, the question we're asking is: how can manufacturing survive and adapt?"

Wood is the main material used in acoustic guitars. Traditionally, they have spruce, mahogany, rosewood and ebony. And some makers would claim these rare and endangered timbers produce the best sounds.

"The guitar industry is like the canary in the coal mine; with climate change and resource scarcity looming, the question we’re asking is: how can manufacturing survive and adapt?"

In 1992, it became illegal to export Brazilian Rosewood logs due to over logging and deforestation. Today, only 7 per cent of the original Brazilian Rosewood forests are left and many species including Indian Rosewood, Ebony, are heading in the same direction.

According to the environment watchdog Global Witness, rare and sought-after guitar timbers, such as ebony and rosewood, are being illegally cut down in the forests of Madagascar and exported to Chinese guitar factories.

International guitar makers received a wake-up call in 2011, when the US Fish and Wildlife Service confiscated approximately $500,000 worth of wood from guitar giant Gibson, on suspicion they were using illegally sourced timber from Madagascar. Around the world, the industry scrambled to find more sustainable timbers. And Australia has led the way.

The high quality of Australian guitar manufacturing is recognised globally and instrument export numbers are steadily growing. Known for their distinctive use of native timbers, two Melbourne-based manufacturers, Maton and Cole Clark, are industry leaders. Together the companies produce over 13,000 guitars annually.

Both companies use an extensive range of timbers to produce their guitars. While traditional woods that produced the desired sounds, known as tonewoods, are becoming harder to source, Maton and Cole Clark have been exploring non-traditional, sustainable Australian timbers in their guitar construction.

"The tonewood refers to specific timber varieties that possess tonal properties that make them good choices for use in acoustic stringed instruments," Professor Gibson says. 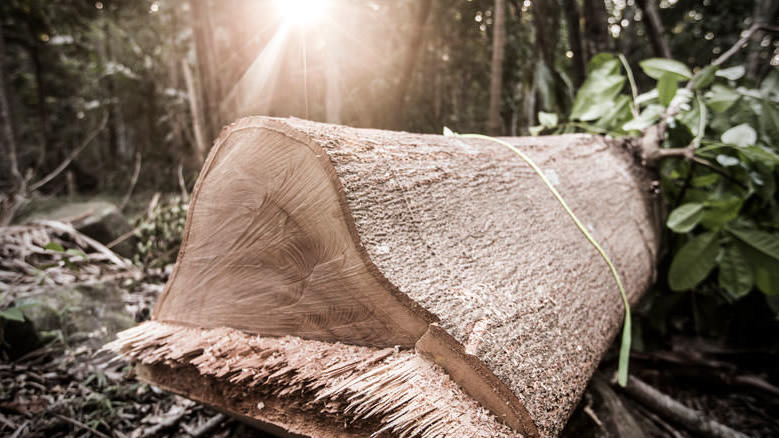 A cut down Queensland Maple tree, destined to become part of a guitar. Photo: Paul Jones

Fortunately, Australia has a wide range of under-utilised tonewoods, and it's these timbers Maton and Cole Clark are now using in a range of their acoustic guitars. "Although there are numerous Australian timbers used in a guitar, the case of Bunya Pine has a unique story," Dr Warren says.

Bunya Pine is now widely used for guitar tops or faces - known as soundboards in the industry. Soundboards are viewed among guitar makers and players as the heart and soul of the instrument.

"Most general production guitars are made with a soundboard of North American spruce, a slow-growing conifer species that requires hundreds of years of growth before the tree is mature enough to be cut down. But Bunya Pine makes an excellent soundboard and matures in about 80 years," Kirby says.

Going back to the source

Kirby has been in the business of sourcing and milling timber for about 25 years and tonewoods are the core focus for his small sawmill in the Mooloolah Valley, in Queensland's Sunshine Coast hinterland.

He has been supplying Australian timbers to Maton Guitars since the late 1990s and to Cole Clark Guitars since their inception in 2001, as well as to many private luthiers (string instrument makers).

Kirby has a passion for wood. He loves it so much so that his house is a shrine to different Queensland timbers. From piers, floors, cupboards and handmade furniture to a carved timber washbasin in the bathroom, almost every conceivable thing in the house is made out of wood.

"Not only does the Bunya tree grow perfectly straight, but it yields an outstanding soundboard timber, probably the best Australia has to offer."

Over the years he has developed a strong technical knowledge of instrument-building as well as in forestry and plant botany. He deals in a selection of Australian timbers, including Red Cedar, Silver Quandong, Blackwood, and Queensland Maple to name a few. But it's the Bunya Pine that has a special significance for him.

Showing off a huge pile of recently milled Bunya Pine timber, the jack-of-all-trades says a lot of people in the guitar industry initially disparaged Bunya because it wasn't cool. But now, with sustainability and alternative timbers in demand, it's in fashion.

"Bunya Pine can grow to massive proportions. They are a towering and majestic tree and can grow in excess of 45 meters high, with a trunk diameter of up to three meters," Kirby says.

Taking to a maze of dirt roads in plantation state forests near the town of Imbil, Kirby and forest worker Lester Jarick of HQ Plantations point out a Bunya tree with its dome-shaped crown visible in the distance.

"Not only does the Bunya tree grow perfectly straight, but it yields an outstanding soundboard timber, probably the best Australia has to offer." Kirby also explains there is a story about Bunya Pine that makes the tree so significant to him.

"The Bunya is very important to indigenous people from the Bunya Mountains in Southern Queensland. They would gather to feast on the ripe nuts from the Bunya tree and to sing, dance and celebrate."

This seems to be a tricky moral issue for Kirby.

"I recognise the Australian Indigenous significance of this tree. And I have apologised to Indigenous communities for cutting down Bunya trees, even if our trees are sourced from plantations planted in the 1920s." 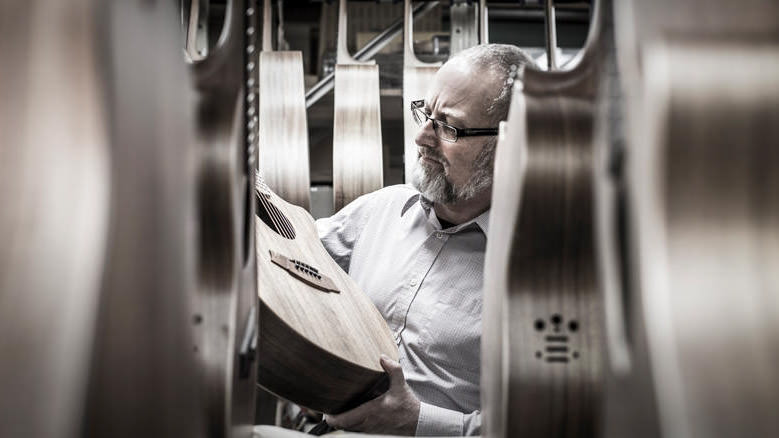 The sounds of sustainability

While some guitar makers would claim these rare and endangered timbers produce different sounds, Miles Jackson, CEO of Cole Clark Guitars, isn't quite so convinced.

"Musical instruments are a combination of many species of wood from many different parts of the world. We have been experimenting with Australian tonewoods and have come up with very similar and sometimes unique timbers that are just like traditional tonewoods."

"Take this guitar here," Jackson explains. "It's got Bunya Pine from plantations in Queensland, Australian Blackwood sustainably harvested from private farms around the Otway Ranges in Victoria, and Huon Pine recovered from a lake in Tasmania."

"If you want a classic guitar with spruce, rosewood and ebony, sure we can do that. But if you want a similar sounding guitar made from Bunya, Blackwood and Blackbean? Yep, we can do that too and that’s a fully sustainable guitar."

From the start, Cole Clark, have searched out tonewoods that are grown and harvested sustainably in Australia.

Although Cole Clark do make a small number of guitars from endangered timbers that have been legally sourced and verified, the company is pushing for completely sustainable guitars.

"If you want a classic guitar with spruce, rosewood and ebony, sure we can do that. But if you want a similar sounding guitar made from Bunya, Blackwood and Blackbean? Yep, we can do that too and that's a fully sustainable guitar," Jackson says. 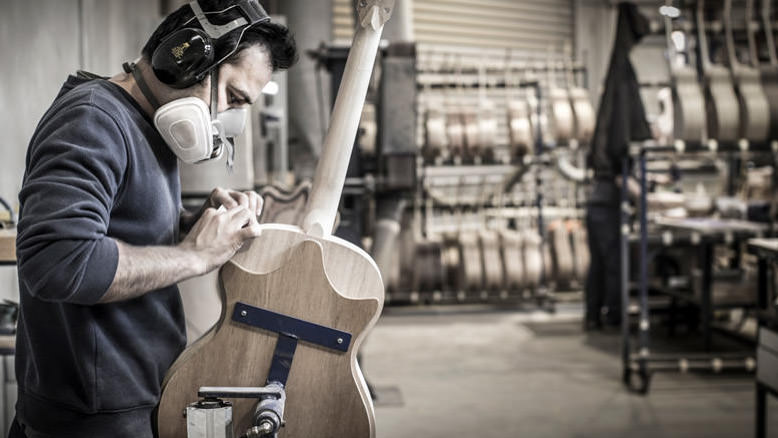 Professor Gibson points out, that some of the sustainable guitars made by Cole Clark are used by well-known musicians like, Jack Johnson, Ben Harper, Tex Perkins, The Living End, Johnny Marr from the Smiths, and Mars Volta.

Miles Jackson believes guitar consumers are ultimately the key to changing the trade in threatened and endangered timbers used by guitar makers. There are limited amounts of timber quantities left and to make things worse there is the temptation for some to skirt the regulations all together. 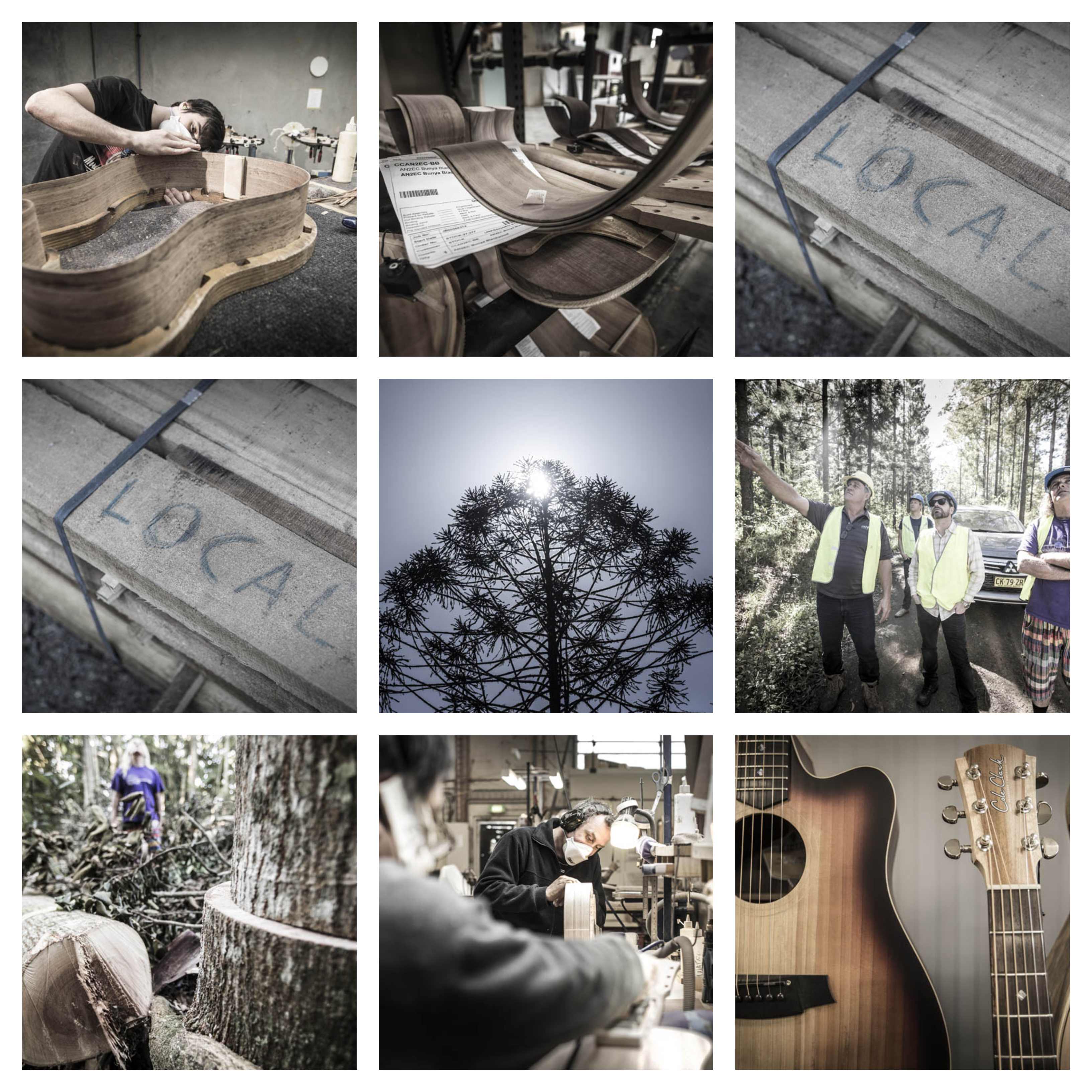 "For me, this type of research combines my personal passion for guitar playing with the more pressing question of, how can we both care for our environment and make manufacturing economically viable," Professor Gibson says.

"Consumers are looking for better and more environmentally friendly products and also there is the necessity to produce sustainable products because of the scarcity of resources."

Recent surveys show that a large percentage of global online consumers are willing to pay more for products from companies they know are making a conscious effort to reduce their carbon footprint.

"I think companies are becoming more mindful about how they manufacture things and how that impacts the environment," Professor Gibson says. "But what really matters is consumer awareness of how everyday things we use are made: who manufactures them, what they're made of, and where the resources come from that go into making them.

"Hopefully our research can help, by making musicians more aware of how their cherished guitars are connected to the global issue of the future of the world's forests."