Callum Champagne shows us how changing the way we interact with our food can have far-reaching and lasting results.

Food. It's the primary way we engage with the environment, whether knowingly or not. Yet currently there is a lack of support and security for farmers.

The rise of supermarkets and our appetite for convenience and choice has created a divide between consumers and producers.

Most of us have very little idea where our food comes from or how the farming practices used to produce it are impacting the land and the people growing it. Callum Champagne, Farm Manager at Green Connect, is working to bridge the gap by bringing farming to the people and showing how the benefits of re-engaging with food stretch well beyond his little patch of dirt.

Growing up on a permaculture demonstration site near Bega in NSW, Callum's interest in the environment and sustainable land management grew throughout his childhood. After high school, Callum moved to Wollongong to follow this passion.

"I was reaching adulthood at a time when environmental crises were thrust to the front of the public agenda," Callum says. "I got into environmental sciences to study the biophysical aspects of climate change. But what I found more important was how humans relate to this issue.

"How humans both influence these environmental crises in a negative way and how changing the way human society operates can influence it in a positive way. That's why I'm so interested in sustainable food. Food is that real intimate intersection between the human and biophysical environments."

"We create jobs and employment pathways for young people and former refugees, and we create these opportunities in sustainable industries."

Getting his hands dirty

After graduating from UOW, Callum travelled the world for a year, volunteering at sustainable farms throughout the Mediterranean, India and the Philippines. Upon returning to Australia he completed a Masters of Sustainable Development at the University of Sydney before returning to Wollongong to volunteer for fellow UOW graduate, Aaron Sorensen at Elemental Permaculture. Aaron designs and manages a number of school gardens throughout the Illawarra, including Warrawong High School's permaculture garden.

"The school gardens at Warrawong High and Cringila are among the premiere permaculture school gardens in Australia," Callum says. "I was fortunate enough to volunteer at Warrawong High, and when a piece of land on the other side of the school came up for grabs I met Green Connect's General Manager at the right time and, together with a group of passionate community members, we dreamt this up."

That dream was a 12-acre farm that would complement Green Connect's waste recovery service that keeps more than 1400 tonnes of waste out of landfill each year and employs more than 100 young people and former refugees.

"Green Connect is a social enterprise. So it's a not for profit that uses a business model to create social change," Callum says. "We create jobs and employment pathways for young people and former refugees, and we create these opportunities in sustainable industries."

As Farm Manager, Callum is responsible for Green Connect's sustainable urban farm where he works to produce and sell what he calls fair food. "There are a lot of buzz words - organic, biodynamic, local regenerative - we just call our food, 'fair food'. It's food that's good for the environment, good for those who eat it and good for the people who grow it." 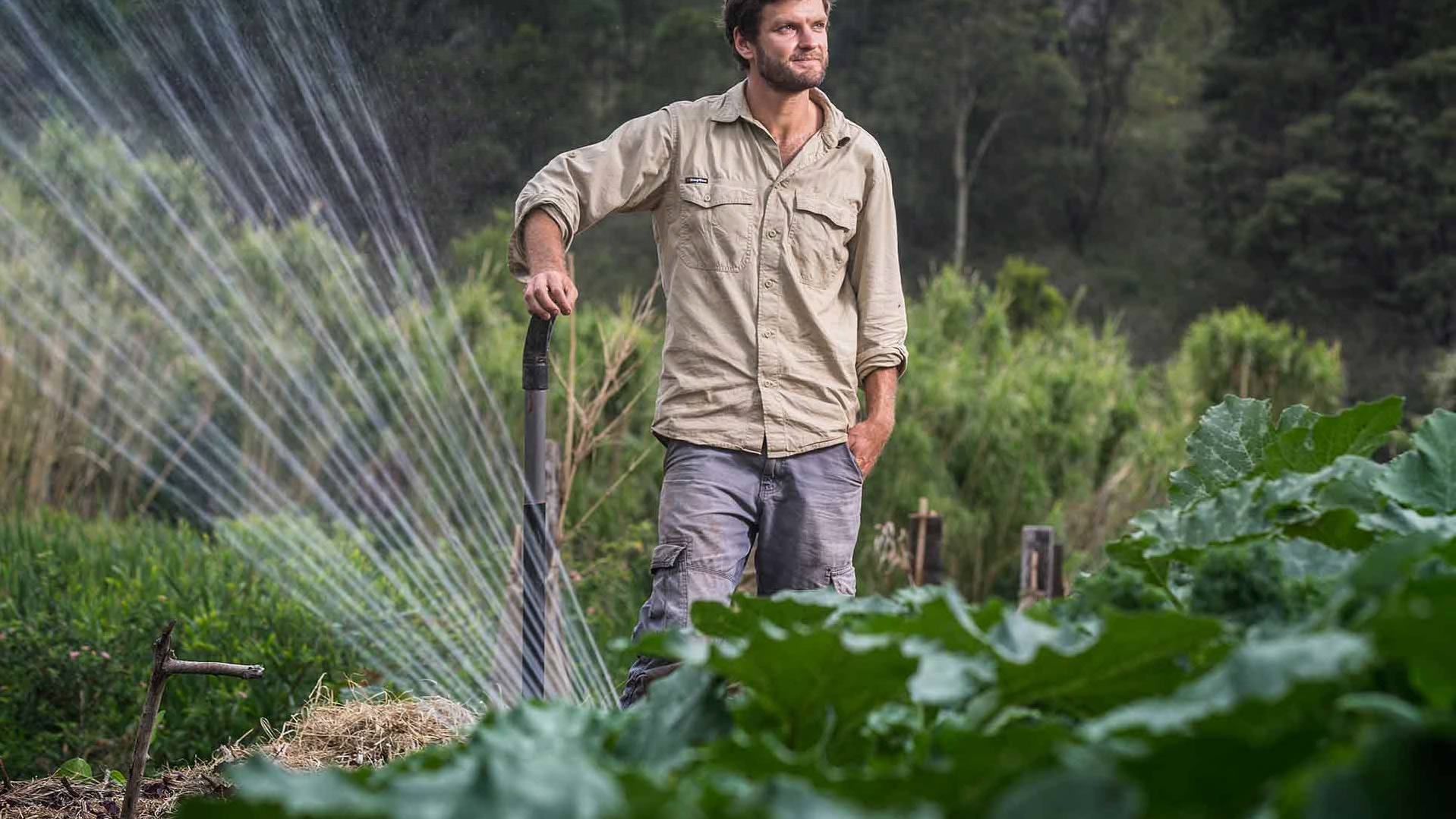 Good for the environment

Industrial agriculture is one of the biggest pressures we place on our environment. Some farmers, yielding to the demands of corporate businesses, push their land to the limit by modifying their management practices with fertilisers, pesticides, monocropping, land clearing and water use. Callum prefers to employ a number of agro-ecological models - including permaculture and the knowledge of former refugee workers - to grow more than 35 types of vegetables and 12 types of fruit, chemical free.

The produce is then sold to local restaurants and about 60 families with minimal food miles. The land they are farming on was formerly neglected school land overrun with blackberries, lantana and other weeds. Callum believes consumer awareness and consumer support are essential to building a more sustainable and secure food system.

"Farmers feed the world and manage the bulk of the world's ecosystems," he says. "It's the biggest use of land in the world, so like it or not farmers are the custodians of the environment and if we want to reach environmental sustainability then farmers need to be supported."

Good for the community

"The Illawarra has a strong history in heavy industry, notably coal and steel, and these industries did really good things for the region and created lots of jobs, but they also had a considerable environmental impact," Callum says.

The region also has a strong history in settling refugees after periods of conflict, including WWII, Vietnam War and Iraq War. More than 2200 refugees have started a new life in the Illawarra since the region was declared a Refugee Welcome Zone in 2002.

With heavy industry in decline, the Illawarra has one of the highest unemployment rates in NSW. Two groups who are over-represented in this statistic are young people and former refugees.

"These are people who, often through no fault of their own, are isolated from the Australian workforce," Callum says. "We're about providing supportive employment to create their first opportunity to enter the workforce."

While innovation is gaining momentum as the industry that will lead the Illawarra region forward, Callum and his team are quietly working in the shadows of the steel works to create a brighter future for the region in their own small way.

"Green Connect is about working in an industry that will sustain future generations," Callum says.

Good for the people who grow the food

As a social enterprise, the organisation is always looking to tap into the ideas and existing talents of staff. Emmanuelle Bakenga is a former refugee from the Democratic Republic of Congo. When he started working for Green Connect he was part of their waste recovery team until they discovered he was a degree-qualified social worker.

"When we found out he had these skills teaching and supporting other people, he was employed part-time as a staff support worker and is now responsible for supporting more than 120 refugees and young people," Callum says.

"These guys," Callum says gesturing to the workers on the farm, "for no real reason are predominantly Burmese. They come from a farming background, so this is what they want to do, this is what they know and this is where they feel comfortable."

Callum goes on to describe his former refugee staff as "hard working, innovative, entrepreneurial and super respectful", and believes the main reasons they are isolated from the workforce is their language skills and lack of industry connections.

"The biggest thing for these refugees is learning English, so this is a great opportunity for them to learn in a casual setting such as farming because it's something they are comfortable and confident with," he says.

The farm sells the majority of the food it produces through a subscription-based weekly fruit and veg box, which involves customers committing to a full three months.

It's a model that provides the funds they need to pay the workers a fair wage and grow the produce in line with their fair food philosophy. Knowing there are customers who have already purchased the food gives the farmers security and drastically reduces farm gate food waste. 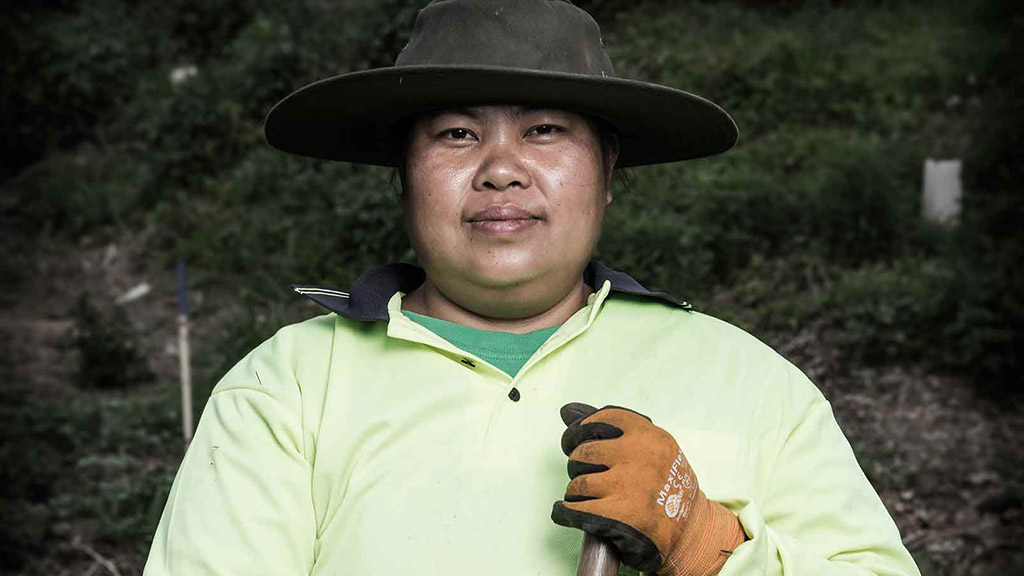 Good for those who eat the food

The benefits of these boxes for a consumer go beyond knowing it's healthy for you and organically grown. It builds a level of trust and fosters a healthy relationship between the customer, the environment and the farmers.

The boxes also promote food literacy, with each box coming complete with recipe cards and stories that build people's capacity to eat seasonally and eat differently.

"Staff here are constantly teaching us about different things to eat," Callum says. "All the Africans love pumpkin leaves, taro leaves, sweet potato leaves and bean leaves. If we were to just put that in a box, people would wonder why we have given them an off-cut. But, if we put it in there with a story about a worker who grew up in the Congo and that was a staple of theirs, along with a recipe, then people get really excited."

The future of the farm

For Callum, this socially and environmentally responsible approach to farming has the potential to change the way a society interacts with food, while also having a positive impact on the lives of the people who grow it.

"It's about consumers having more awareness about where their food is coming from and supporting the growers they want to see prosper, not just the first ones that appear on the supermarket shelves," he says.

"Ultimately we will be what our community wants us to be. Hopefully, in five years our staff now will be steering the organisation and doing things they want to do."