The science of making sex safer ... and maybe better

A UOW team is working on a next-generation condom that enhances pleasure and encourages greater use.

Inspiration can come from the unlikeliest of sources: idle chat, surfing the web, daydreaming, sex shops. Yes, sex shops. Where else would you start researching a product that could revolutionise the humble condom? Dr Robert Gorkin, a Biomedical Engineer with UOW's Intelligent Polymer Research Institute (IPRI), is leading a small team of researchers who received funding from the Bill & Melinda Gates Foundation to develop a "next-generation condom".

The Gates Foundation put out the call in late 2013 as part of its Grand Challenges Explorations research grant scheme. Rather than ask for an education campaign or similar social strategy, their approach took a different angle on the global health challenges of reducing the incidence of unplanned pregnancies and preventing sexually transmitted diseases. Their brief asked applicants to come up with a condom that "significantly preserves or enhances pleasure, in order to improve uptake and regular use". Condoms, they say, are cheap, easy to produce, easy to distribute, available practically everywhere and easy to use.

So why reinvent the wheel? Despite estimates that 18 billion condoms will be used this year, the Foundation has highlighted that many people just don't want to use them. Loss of sensation is cited as one of the primary reasons why men forgo protection in the heat of the moment. If sensation could be improved then the Foundation has suggested more people would use them, leading to better health and well-being of people across the globe. The Foundation is particularly interested in sub-Saharan Africa or South-East Asia where lack of condom use aggravates social, economic and even gender inequalities.

"It was a random news article I read that was saying simply, Bill Gates wants safer sex," Dr Gorkin told the ABC's Catalyst program about the first time he heard about the research project. The IPRI labs had for the past few years been developing a new material called hydrogels as part of their medical bionics research, aimed at more lifelike prosthetics, tissue engineering and implantable medical devices.

The proposal was unlike any other research grant applications. Two pages and don't tell us about your affiliations or accolades, was the Foundation's message. All they wanted was the idea. Dr Gorkin's proposal was one of a handful of the 1700 applications that won funding of $100,000 US Dollars. For projects that show promise, there's the possibility of a further $1 million in Gates Foundation funding.

Before reinventing the condom, it pays to take a quick tour of the origins of the ubiquitous rubber product, which is also one of the oldest known medical devices. According to some scholars, the first condom was part of antiquity and mythology. King Minos of Crete (who reputedly lived around 3000 BCE) used a goat's bladder to protect his wife following the reported deaths of his mistresses after sex.

Evidence from ancient Egypt shows use of linen sheaths, dyed in various colours to denote social status. Sheaths made from animal bladder or intestines were used throughout the Roman world. While records of those ancient uses are not all that common, it was during the Middle Ages that undisputed evidence can be found for condom use.

Italian anatomist Gabriele Falloppio, who described the Fallopian tube, describes conducting experiments with a sheath made of linen and animal intestines to protect against what was then known as 'the French disease': syphilis. Of the 1,100 men who used the sheath in his experiments, all were protected from contracting the disease. A few hundred years later, the advent of modern vulcanised rubber put an end to the local butcher's involvement in the condom trade and made mass production possible. The hydrogel condom is another step in its evolution.

You had me at hydrogel

You could be wearing one now … a hydrogel that is. They're often used in products such as contact lenses because they are soft tissue-like materials that are safe for use on the body. Technically hydrogels are defined as water-swollen polymer networks - think of them as squishy plastics - and typical uses include food products, cosmetics, pharmaceuticals and medical implants. IPRI researchers have pioneered a new class of 'tough' hydrogels that are strong and stretchable like rubber.

"Tough hydrogels are exciting because they can be designed to feel more like human skin than latex or other condoms," Dr Gorkin says. "They can also be completely transparent, they have no issues like latex allergies, and they are potentially biodegradable and eco-friendly. They even have the potential to deliver anti-STD medication or sensation enhancing agents.

"Imagine if we made a condom that people couldn't wait to use, instead of simply had to. And what if it could change how people thought about sex by just altering what a condom is made out of? So over the past year we've spent a lot of time working out which formulations satisfy the mechanical properties of being stretchy and strong and are also effective biological barriers."

Sensation aside, the condom still must perform the primary function of contraception as well as a block to bacteria and viruses to prevent against sexually transmitted infections. The team's microbiologist put each formulation the materials scientists develop through a series of rigorous tests to see if they meet or exceed the standards required for latex condoms. A further innovation could involve combining hydrogels with pharmaceutical agents for disease prevention or lubrication for increased pleasure.

A measure of pleasure

To measure the preference to this new material, researchers at Swinburne University of Technology are using neurological equipment to test people's reaction to touching the hydrogel. The test involves participants touching the different materials with their finger and measuring their responses to see if the researchers can trick the brain into thinking the hydrogel feels like human skin.

Swinburne's Dr Joseph Ciorciari, Director of the Brain and Psychological Sciences Centre, who is leading the testing phase of the project, said that the electroencephalography (EEG) was allowing neuroscience to measure how pleasurable the hydrogel was, compared to latex.

"The EEG allows us to measure the brain's subconscious responses to the material, before the participant has even had the chance to decide whether or not they are going to respond positively to it," Dr Ciorciari said. "This removes any bias or pre-existing influences from the equation. Measuring changes in brain activity is an effective way of determining whether or not the hydrogel is more preferable than existing condoms."

Dr Ciorciari told The Age the material was "really unusual to touch. It feels like real human tissue, like when you're touching someone but they're covered in a lubricant". He said the hydrogel condom was the only material that hit a "strong hot spot" at the front of the brain. "We also got a perceptual novelty response, as in 'oh that's different, I want to feel more of that'," he said. 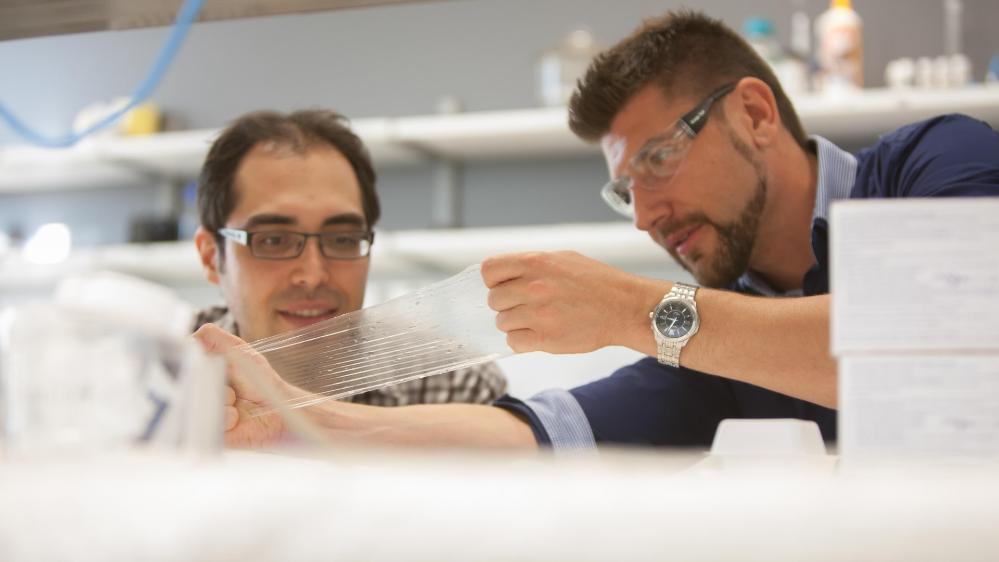 C is for condom ... and community

The Project GELdom team, as they've become known, have enlisted the skills and resources of UOW's Centre for Health Initiatives (CHI) and Swinburne University of Technology's Centre for Design Innovation to understand the barriers to condom use and come up with design and packaging that communicate safe sex in South-East Asia and Africa.

"Even if we can change the material, we need to be sure that people want to use it," Dr Gorkin says. "Any information and data on knowledge, attitudes, beliefs, cultural factors, barriers and enablers to condom use will inform the rest of the project areas. This understanding is critical to our success."

Swinburne contributors, Dr Gianni Renda and Bridgette Engeler Newbury, recently called on the creative powers of university students in an international design competition to come up with the packaging and branding for the next-generation condoms. Course Coordinator for Communication Design / Business, Bridgette Engeler Newbury, said the branding and packaging needed to consider the local cultural preferences that influence perceptions of condoms.

"There are still parts of the world that are not purchasing and using condoms for many different reasons. It would be great if the packaging and branding tackled this issue," Ms Engeler Newbury says. The competition brief challenged designers to share their ideas on innovative and culturally appropriate ways to communicate safe sex in South-East Asia and Africa.‌

More than 50 entries were received from countries around the world including USA, UK, South Africa, India, Malaysia, Indonesia, Europe and Australia enabling the research team insights into how 18-25 year olds view condoms and sexual health from different social and cultural perspectives. "This will help us develop our ideas further and assist us to design more appropriate and meaningful brands and packaging. The ideas will ultimately assist us in developing better sexual health practices." 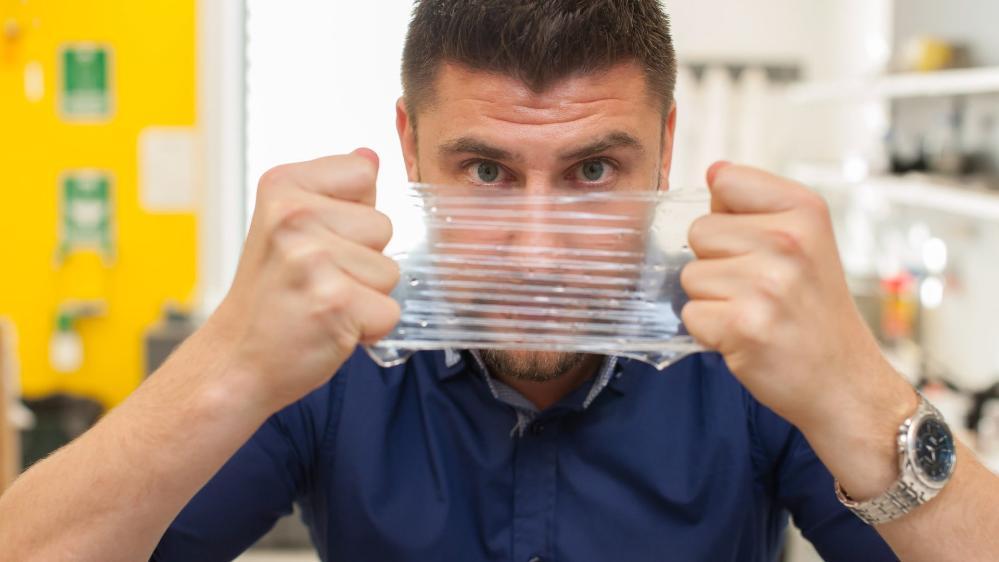 Researcher Robert Gorkin III with the next generation condom.

The project is nearing the end of the first phase, which requires them to present "interpretable and unambiguous data" to the Foundation to be in the running for more funding. Along the way UOW's Global Challenges program provided additional research money, which is critical in the often resource-poor world of early career researchers.

"To begin with there was a big question around the effectiveness of these materials as a biological barrier," Dr Gorkin says. "We've tested dozens of variations of hydrogel formulations and we're getting excited about what they're showing." The testing has moved from lab bench to production line through a partnership with Enersol, who are testing condom prototypes according to the rigorous quality assurance standards required of medical equipment and tools.

"We hope to get this to people as quickly as possible. We're right at the point where we need to find the resources to take this to people and get them testing the condoms." GELdom will soon be largely out of the researchers' hands and it will be up to the community to decide if the next-generation condom lives up to the early promise and excitement generated by that initial visit to a local sex shop.