Burrowed into the icy creek beds of the Southern Highlands lives a tiny population of critically endangered native crayfish. The rarest crayfish in NSW, in fact.

Awakened from a daytime slumber by the very appealing smell of pilchards, a female crayfish creeps out of her creek bed burrow into our net.

She's one of just a handful of Fitzroy Falls Spiny Crayfish (Euastacus dharawalus), the rarest native crayfish in New South Wales, living in a 12km stretch of creek at Fitzroy Falls in the Southern Highlands. And illegally removing her or her mates from their gum tree-lined creek can land you in jail for two years and leave you with a $220,000 fine.

The Fitzroy Falls Spiny Crayfish has joined the Northern Hairy-nosed Wombat and the Southern Bluefin Tuna on the International Union for Conservation of Nature Red List of 87 native animals that are critically endangered - meaning they are facing an extremely high risk of extinction in the immediate future.

UOW Biology Honours student Katie Hendry is on a mission to save these critically endangered critters. But first, she needs to know more about them.

The mostly shy but sometimes aggressive little creatures can live up to 30 years, but are under threat from introduced yabbies, which compete for food and shelter; illegal fishing and habitat degradation from polluted farming runoff; and clearing and construction of the Fitzroy Falls Reservoir, which supplies water to the Southern Highlands and Shoalhaven regions and at times, Sydney.

"Getting to know them has been really interesting," says Katie. "They can be really aggressive. If I approach them, they'll raise their chelipeds [claws] quite high at me. But the yabby, the invasive species, I would consider them like that chilled out guy at uni. They just don't really care you're there.

"The yabbies have even been so bold as to tap on the glass in their individual holding tanks to ask to be fed. Whereas the crayfish are always very angry to see me."

So my research is on the critically endangered Fitzroy Falls Spiny Crayfish or Euastacus dharawalus and the behavioral interactions between itself and the invasive Common Yabby or Cherax destructor. So the Fitzroy Falls region is south of the Southern Highlands area, so it's made up of agricultural land as well, as we've got Water New South Wales over here which is the utiliser of the Fitzroy Falls Reservoir.

The critically endangered Fitzroy Falls Crayfish has low population so we're trying to find out in the field why that's happening. So what I've been doing is collecting the specimens from the field of both the endangered species and the invasive species. After I've taken ten specimens back to the lab of each species, I've been doing conducting behavioural trials on both of those species to find out what exactly is going on out in the field and how they are behaviorally interacting with each other.

Getting to know them behaviorally has been really interesting. So the Euastacus dharawalus or the endemic species here, yeah they're extremely aggressive in their displays. So they'll usually really, if I approach them, they'll raise their calipers quite high and then start walking back. And then the Cherax destructor I would consider them like that chilled out guy at uni, just don't really care that you're there. They've even been as bold to come up to me when they're in their individual in holding tanks and actually like tap on the glass to have asked to be fed.

The endangered Fitzroy Falls Crayfish only has about 12 kilometers of habitat which it utilizes. It's not found anywhere else. And it's recently been listed as critically endangered. Cause their habitat is so limited it's extremely important to find out why their population is declining. And one of those thoughts is that the invasive Common Yabby is causing that through competitive and behavioural interaction. So literally out competing the natives for limited resources such as food and shelter

So I got into this area because I am really passionate about conservation. Yeah, I just fell in love
with on the ground research and getting out there and making a difference. Like that's where I see myself being. Yeah, I have a special interest in aquatics and especially freshwater species as well as
marine species as well. Yeah, just think they're the most amazing creatures and we know so little about them compared to you know their land for north counterparts. So yeah, I just love to get
on the ground and learn more about them and getting people involved in such little known species is also really rewarding.

For the past few months, Katie, a Bowral-local, has been visiting the area around Wildes Meadow Creek in search of the crayfish. It's potato-farming country, about 6km downstream from Fitzroy Falls' stunning 80m-high waterfall and only 20 minutes drive to the country gardens and tulips fields of Bowral, a mecca for wealthy Sydney retirees and foodies. But there's one crustacean you won't find on local menus.

As part of her project, Katie has collected 10 Spiny Crayfish and 10 invasive Common Yabbies (which are native to Australia, but not found east of the Great Dividing Range, until their introduction to the area around ten years ago), shipped them back to her UOW lab and started behavioural trials on both species - to see how they interact with each other and how they compete for food and shelter. She's the only researcher actively studying these critters at the moment.

"There's so much we don't know about them," Katie muses. "I started working on this project because I am really passionate about conservation. I fell in love with on-the-ground research - getting out there and making a difference. That's where I see myself being for the rest of my life - whether it's in a job or doing it as my hobby. That's where I'm happiest, that's where I'm most fulfilled."

Katie says she's grateful to be doing such meaningful and important work, particularly as an honours student.

"Crayfish are important members of any ecological community. They are often used as indicators for water quality as they help break down organic matter in waterways…If they were to become extinct, there would most certainly be flow on impacts to other species living within the ecosystem."

Katie says her experience at UOW has been "absolutely fantastic".

"I've found UOW to be a fantastic community with lots of support and so many amazing supervisors. You have world-renowned researchers at your fingertips who you can just pop in on and ask advice from or just have a chat about different animal behaviours and they can draw on their experiences and advise you to go in a certain direction. There's no other platform where that's possible."

"The Fitzroy Falls Spiny Crayfish has joined the Northern Hairy-nosed Wombat and the Southern Bluefin Tuna on the list of 87 native animals that are critically endangered." 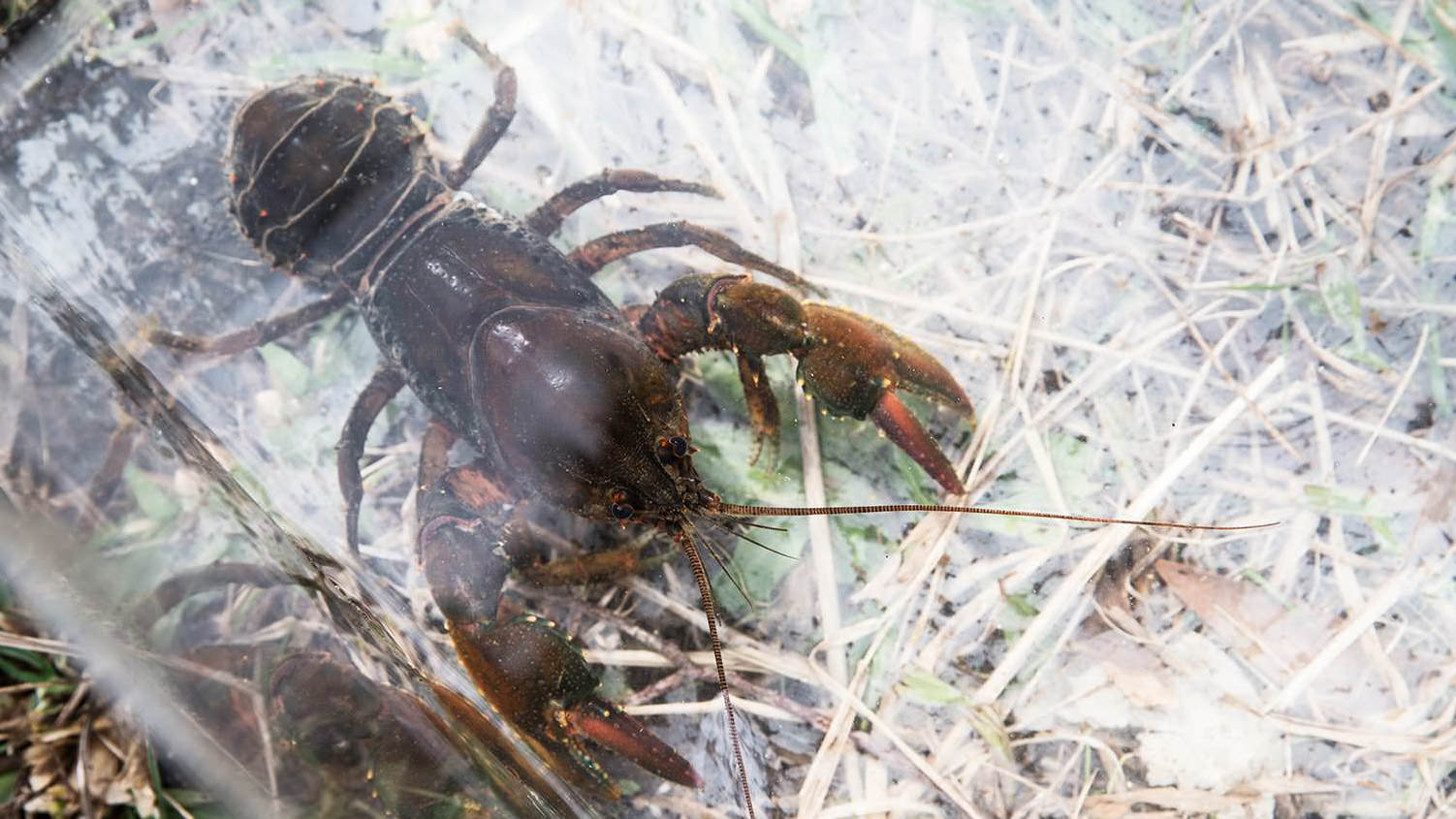 Katie is hoping her research will pique the interest of locals, who have a role to play in saving the crayfish.

Katie said before she started the project she, as an ecologist, didn't even know about the crayfish. "It was a huge surprise to me. I think if locals know there is an amazing freshwater species so close to home, they will really come on board and help us protect them, help us rehabilitate the creek lines."

Since the construction on the Fitzroy Falls reservoir was completed in 1974, there are now two populations of the species isolated from each other - one below the dam wall and one upstream of the reservoir, of which 1km of habitat is protected as part of Morton National Park. Only 750m of habitat below the dam wall (which is largely agricultural land) is now considered high quality for the slow-growing crayfish, which take up to seven years to mature.

"I'm hoping my research will help close some key knowledge gaps. For example, where we should be focusing our efforts to help protect the crayfish. Should we focus on rehabilitating polluted creek lines? Or should we concentrate on eradicating yabbies, which are only native in NSW to places west of the Great Dividing Range?"

"I started working on this project because I am really passionate about conservation. I fell in love with on-the-ground research – getting out there and making a difference. That’s where I see myself being for the rest of my life – whether it’s in a job or doing it as my hobby." – Katie Hendry