New breed of Australian plum promising in fight against dementia

Researchers are testing Queen Garnet Plum juice on blood pressure and memory in one of the first human trials on the new ‘superfood'.

Researchers at UOW are testing the short-term effects of Queen Garnet Plum juice on blood pressure and memory in one of the first human trials on the new 'superfood.'

Queen Garnet Plums, which were accidentally bred by Queensland government scientists a decade ago, are being touted as a potential weapon in the fight against obesity after the plum juice returned obese rats with high blood pressure, fatty livers, poor heart function and arthritis back to normal in just eight weeks. It is now thought Queen Garnet Plums could also be beneficial for people with dementia.

Nutritionist Associate Professor Karen Charlton, from UOW's School of Medicine, is leading an acute feeding study at the Illawarra Health and Medical Research Institute (IHMRI) that aims to determine how much plum juice would be needed to impact blood pressure and memory in humans.

"This fruit packs a punch. One glass a day is probably going to be enough to see some real benefits, but we first need to understand how the body metabolises its bioactive compounds," Professor Charlton said.

"As a nutritionist, it's exciting to discover the untapped healing potential of fruits and vegetables that could be used to fight common conditions like high blood pressure and memory loss." 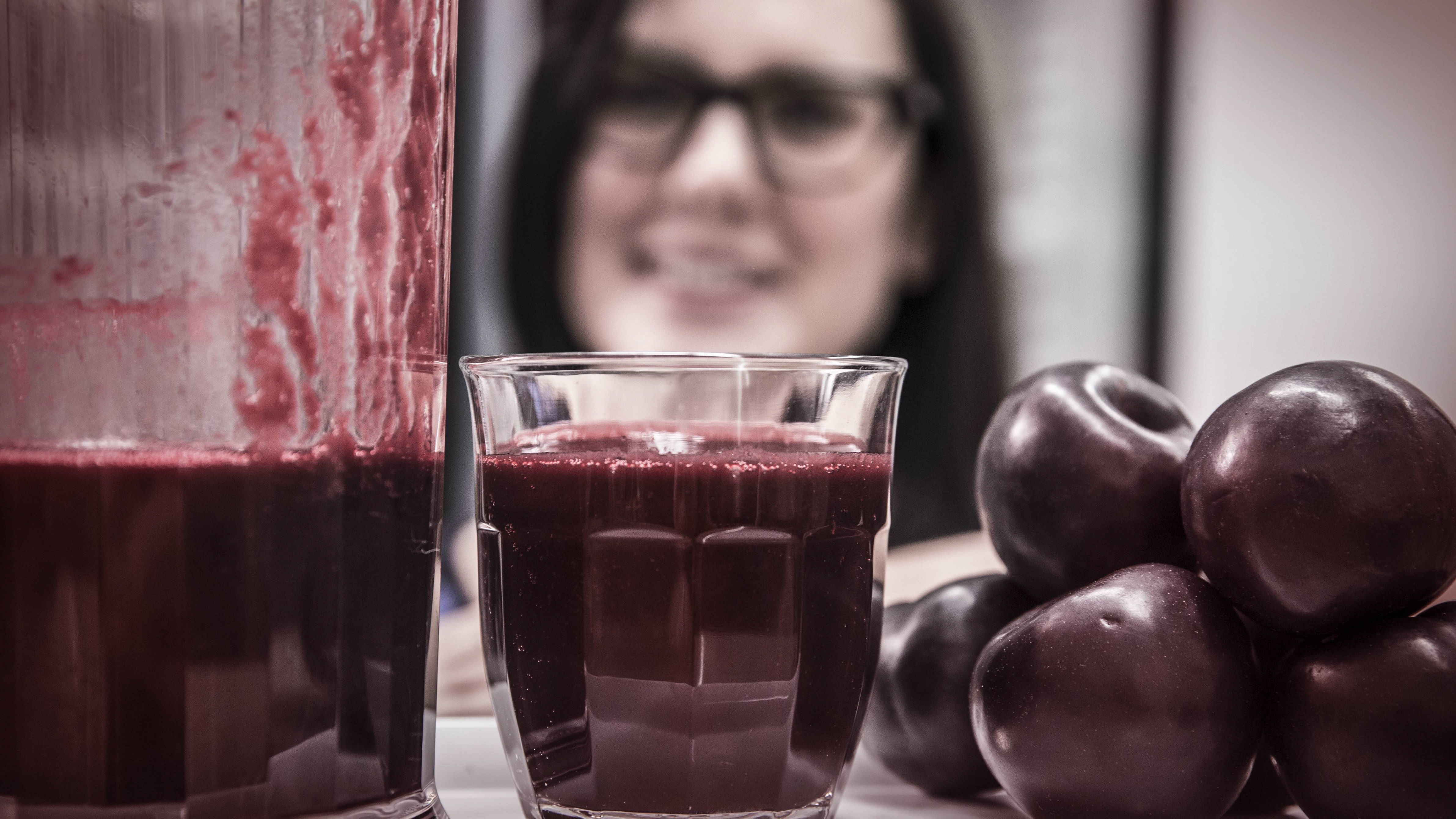 The secret to the Queen Garnet Plum is its very high anthocyanin content. Anthocyanins are naturally occurring compounds that give fruit its purple-blue colour. It makes strawberries red, blueberries blue, or in this case, plums deep purple. The Queen Garnett Plum has a deep purple flesh, providing more powerful anthocyanins per serving than traditional plum varieties.

Previous UOW studies have shown high levels of this anti-oxidant rich compound in cherry juice can have positive health impacts.

"Our research team was recently involved in two randomised clinical trials where we looked at the effects of anthocyanin-rich cherry juice on both short and long-term cognitive function and blood pressure outcomes," PhD student Katherine Kent (pictured above) said.

"We showed that over the short-term, anthocyanin-rich juice can significantly reduce blood pressure over the long-term it has the potential to improve short-term memory in people who have dementia."

Katherine is now working with Professor Charlton and Ezinne Korie, another PhD student, to investigate the Queen Garnet Plums. Associate Professor Steven Roodenrys from the School of Psychology is also providing input on how best to measure memory and other aspects of cognition, including decision-making and speed of processing in the brain.

As part of the trial, participants are fitted with 24 hour blood pressure monitors and taken through a series of cognitive assessments before drinking either a 300ml serving of plum juice or the same amount in smaller quantities over three hours.

The researchers then test urine samples at regular intervals before and after the juice is consumed to see how quickly it is being metabolised by the body.

"It is very exciting to be involved in work with a fruit that shows such potential, but more importantly that tastes delicious and is only grown in Australia.” - Associate Professor Karen Charlton

"This will inform us how much of the juice is needed to provide the amount of anthocyanin compounds that could be of benefit to health. This study will also tell us whether gulping down a large glass of juice in one go has the same effect as smaller sips over a longer time period," Professor Charlton said.

Professor Charlton and her team hope their study will give some insights into how anthocyanins work to help pave the way for larger human trials.

"We used to believe that anthocyanins acted solely as antioxidants by reducing inflammation in the body and scavenging free radicals to fight disease," Professor Charlton said.

"But recent research has shown they have the potential to improve learning and memory by reaching the brain through the blood system and increasing blood flow to the brain."

[PhD candidate Katherine Kent]: Our research team is looking at a group of compounds that are naturally occurring in fruits and vegetables called Flavonoids. And we're particularly interested in one type of Flavonoid called Anthocyanin.

[PhD candidate Katherine Kent]: We used to believe that anthocyanins acted solely as antioxidants and by reducing inflammation in the body and scavenging free radicals. But more recently research is showing that they actually act in a myriad other ways by increasing blood flow to the brain and our improving processes associated with learning and memory. Anthocyanins provide the purple and red pigmentation in fruits and vegetables and in the Queen Garnet Plum they are specifically concentrated in the skin but the flesh also provides up a significantly higher amount of anthocyanins than other plum varieties

[Associate Professor Karen Charlton]: This fruit is a new version of plum, the regular plum. Except it's a much darker and deeper fruit and has a very intense sweet flavour. And we're busy with an acute feeding study which means we ask participants both young and old to come in on two different occasions to the clinic here at IHMRI. And the participants drink the Queen Garnet Plum fruit juice. And the whole purpose of this acute study is that we want to understand better and the uptake in the metabolism of the bioactive components that are found in this new plum. But certainly in terms of this particular compound called anthocyanin. This fruit packs a punch and one glass a day is probably and going to meet or exceed the potential benefits from eating a diet that is rich in fruits and vegetables.

[PhD candidate Katherine Kent]: So as a nutritionist it's really exciting to try and understand that normal fruits and vegetables can actually have significant impact on health outcomes. And we're really excited to investigate this further in another fruit variety which is the Queen Garnet Plum.

This story, by Elise Pitt, was originally published to the UOW newsroom as New breed of Australia plum promising in fight against dementia.