It was a huge year for the University of Wollongong, with 2016 heralding remarkable discoveries, technological advancements, groundbreaking new buildings, and fascinating stories from our diverse student body. UOW photojournalist Paul Jones showcases his photographic year in review. 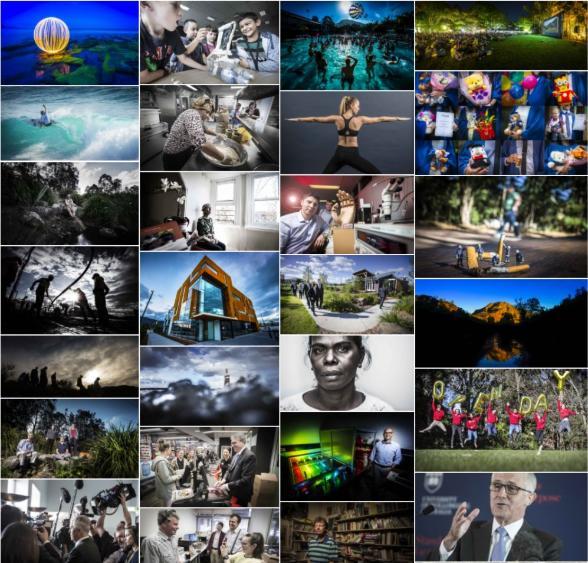 A light sphere on Mc Cauley's Beach Thirroul. Making light orbs are one of the most fun light painting techniques used in photography. Paul Jones uses the process to capture light, ocean and sky.

The UOW pool transforms into a tropical paradise during the annual O-Week Festival.

And during the same month, the Duck Pond Lawn is transformed into a cinema for a screening of Jurassic World.

Researchers at UOW create custom-designed 3D-printed surfboard fins that allow surfers to improve their performance in the water. Surfers on Queensland's Gold Coast test out the new fin styles.

UOW and members of the local community prepare food for the annual Welcome to Wollongong feast. The event warmly welcomes students, staff and families new to the Illawarra region.

The first of UOW's graduation ceremonies for 2016. Students bring an array of gifts and other things to celebrate their achievements.

A behind the scenes photo during the making of the UOW's new brand marketing campaign advertisement.

Creative writing helps women heal and find hope. A joint UOW project to produce a book that offers a glimpse into the path walked by the women who knock on the door of Lou's Place ­- a refuge in the heart of Kings Cross in inner Sydney - as they seek shelter from violence, drug addiction, mental illness and homelessness, and seek to rebuild their lives.

In a remarkable new discovery, an international team of researchers led by Dr Gert van den Bergh, from UOW's Centre for Archaeological Science, uncovered the fossilised remains of ancient hominins in Indonesia, which appear to be the ancestors of Homo floresiensis, the tiny species of human, affectionately dubbed the 'Hobbit', that stood at just one metre tall.

UOW joins a long list of Australian universities that are making their campuses smoke-free zones in a move designed to improve the health and wellbeing of all campus users.

Photos from a field trip to the outback mountain range of the Finders Ranges with a group of local and international geoscientists, which included academics and students from UOW and the University of Colorado.

The NSW Minister for Industry, Resources and Energy, the Honorable Anthony Roberts MP, officially opens the new home for UOW's business incubator and accelerator, the iAccelerate Centre at Innovation Campus.

Every August, UOW hosts Open Day, an event designed to give students information needed for choosing courses and studying at UOW.

UOW Professor Clive Schofield was the only Australian witness at the Arbitration Tribunal under the United Nations Convention on the Law of the Sea (UNCLOS), on the maritime disputes in the South China Sea that have been brewing for decades.

One of UOW's photographic highlights for 2016 - the opening of the IGA, UOW's first supermarket. Vice-Chancellor Professor Paul Wellings OBE mans the checkout during the first day of operations.

UOW will lead researchers from around the world on a seven-year, $45.7-million research quest with the announcement of the ARC Centre of Excellence for Australian Biodiversity and Heritage. Researchers involved include (from left) Professor Richard Roberts, Professor Amanda Lawson, Dr Timothy Cohen and Professor Zenobia Jacobs.

Molecular Horizons, UOW's $80 million Centre of Molecular and Life Sciences, was launched at Parliament House in Canberra, by Prime Minister Malcolm Turnbull. The building will pave the way for medical and health breakthroughs.

Following up a story from June 2016. The next step for the UOW robotic research team is to employ smart materials to tailor soft actuators that will be embedded within the hand as a muscular system. Len Snowdon is pictured with Professor Gursel Alici with Rahim Mutlu at the ACES lab at UOW. Len said he is looking forward to the day when he has one arm to help him carry out his tasks.

A game of soccer and a visit to Early Start formed part of a unique day for Illawarra refugees and their families at the University of Wollongong.

Donald Trump, businessman, television personality and now the President-elect of the United States. Who would have guessed? Dr Anthony Ashbolt, from UOW's School of Humanities and Social Inquiry, did not foresee the result.

The rain didn't perturb more than 1000 students from the fields of commerce, business, IT, and engineering celebrating their graduations during three days of ceremonies at UOW.

Summer lightning storms form off the Wollongong coastline, making for a specular end to 2016.