When we think of summer time, we think of barbeques, late afternoon swims at the beach, and enjoying time with friends and family. It’s been a summer like no other. The ABC reported that more than 12.6 million acres across Australia were burned, 434 million tonnes of CO2 was emitted, half the population was affected by smoke and an estimated one billion animals were killed.

As many of us helplessly watched the devastation unfold, overwhelmed and in disbelief, there was a collective sentiment of ‘what can I do?’

In a time of mourning, loss and hardship, extraordinary UOW alumni, staff and students stepped up to support our friends, colleagues, and communities. These acts of kindness, selflessness and heroism have emerged from this national tragedy, reinforcing the strength and altruism of our community.

On the front line

As Eddi Raglus was hanging up her university hat, she was quickly putting on her fire hat.

The UOW alumna qualified as a Rural Fire Brigade volunteer whilst completing her Bachelor of Creative Arts in Wollongong. Like many students, she returned to her small hometown of Wingham on the NSW Mid-North Coast, for the holiday period. But instead of enjoying relaxing family time, she found herself helping defend her home.

"The brigade took me in under their wing. It really felt like I was joining a big family."

Some of the fires that ripped through the area were described as ‘a giant ball of fire.’

But Eddi told us and Sam Brownrigg at the Wingham Chronical that she always felt safe with her crew even as containment lines broke and flames jumped roads and highways.

"The way that everyone came together was pretty amazing. Sometimes it's the smallest things that make the world of difference."

Eddi is just one of 77,000 brave volunteers at the NSW Rural Fire Service. 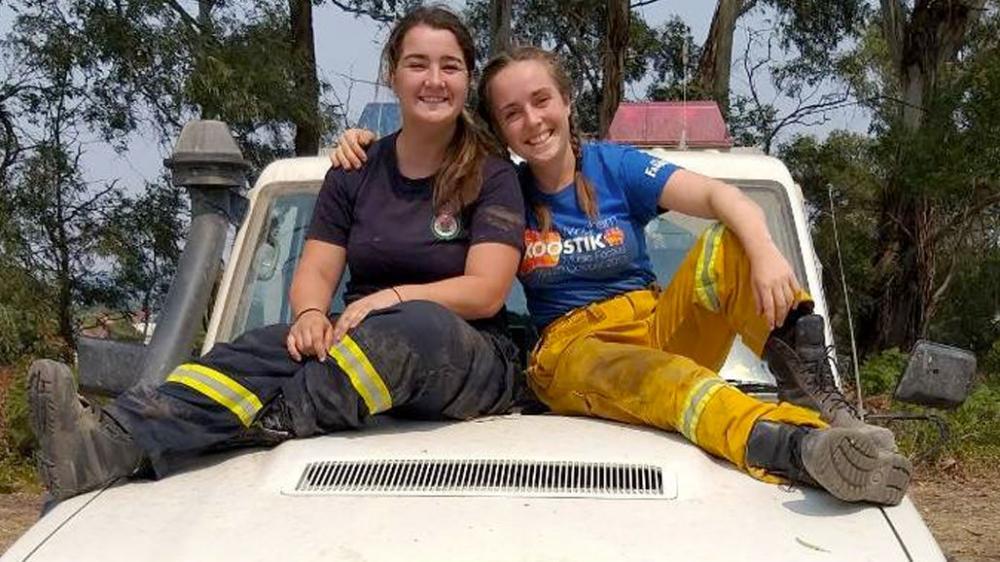 An Aussie icon and a platform for change

Her multi-storey murals might be big, but these little prints of ‘Billy the koala’ and ‘Embers’ have an even bigger message.

Artist, designer and UOW alumna Claire Foxton, found herself, like many Australians, feeling helpless watching the bushfire crisis go from bad to worse on the news.

“We were seeing what was unfolding every day, it was harrowing to see what was happening.”

Captivated by a photo of an injured koala named Billy, and a new iPad in hand, Claire began drawing. After receiving many requests for a more bite-size piece of her work, she began sketching with the idea of creating her first prints.

‘I did some drawings and then people were buying them! I thought if I sold 10 prints I’d be happy.’

After 260 sales, Claire raised more than $10,000 – 100 per cent of which she chose to donate to organisations assisting with the rescue and rehabilitation of wildlife.

Claire described the experience as almost healing, allowing the reality of the catastrophe to sink in.

“You can be so distant to what you see on the news, you want to be able to contribute in a meaningful way.”

“There is beauty in acknowledging the skills you have and using your time in a wise way. It’s really just a small thing that got traction. I think anyone can use their skills to create change; musicians, artists, surfers. Using your skills to benefit others.”

Back to school and back to reality

After people became displaced, were unable to work or had lost everything, going back to school evoked heightened anxiety throughout the South Coast community.

Leanne Shackell, an IT employee at UOW, who frequents the South Coast on holidays, narrowly escaped the fires. With a background in childcare, she knew that once back to school mania kicked in, it would be a difficult reality for families.

“I wanted these kids to feel the same as every other kid going back to school, with the main necessities.”

So Leanne put a call out through the University and community networks with a simple mission: To assemble school supplies in backpacks and do something to help.

“I had the goal of helping 10 children, but it quickly escalated and we ended up providing supplies to 165 children from across Batemans Bay, Bega, Mogo and Broulee. It completely took over my lounge room and dining room.”

She described the day they were able to distribute the backpacks to kids and families, as a day where the community took a collective sigh of momentary relief. Not only did she demonstrate this huge act of kindness, but she went one step further and put on a barbeque to unite the community and help take their minds off of what they’d been through.

“The generosity of everyone has been overwhelming. The fires are over but we need to keep supporting the people who went through this. Whether emotional support or support of a different kind, we need them to know they’re not forgotten,” Leanne says.

As the fires took hold, small tourists towns dotted along the South Coast resembled more of a ghost town than the bustling tourist hot spots they usually are during summer.

Noticing the immediate effects on small businesses in the area, South Coast locals Turia Pitt and UOW alumna Grace McBride, saw the opportunity to bring these small businesses to people around Australia.

Enter @spendwiththem - an Instagram account with a whopping 200k followers, designed to help rebuild towns and businesses affected by the fires. By showcasing products available for purchase on the Instagram page, the #spendwiththem trend took off.

Some businesses reported doing ‘five or six times more business in 48 hours than they ever had.’

“This is a way to put money directly in the pockets of the people and communities who need it most, and need it NOW. Long after the threat is over and the choppers stop flying overhead. Long after summer ends and the wail of sirens ceases in the streets. Help them rebuild. Make them feel heard. Spend with them.”

Grace McBride, echoed Turia’s message in one of her posts:

“This has been a really intense and anxious time for so many and you guys are helping us make things feel a little more hopeful. Thank you for supporting us and, more importantly, for actually buying from these business. You guys are legitimately changing lives.”

With the University deeply embedded in the wider South Coast community, many staff, students, friends and family were directly impacted by the bushfires. UOW’s regional campuses in Bega and Batemans Bay, which are usually buzzing with students over summer, were transformed into places of refuge for residents, students and holiday-makers.

UOW Vice-Chancellor, Professor Paul Wellings CBE acknowledged and addressed the extraordinary efforts of staff, volunteers and the community during this difficult time.
“Your commitment to the community in the face of such a prolonged and large-scale crisis is inspiring and much appreciated.”

In the space of a few weeks, 466 UOW staff donated $82,975. With dollar-for-dollar matching from the University, the total contribution from UOW was a staggering $165,950.

“It is extremely heart-warming to observe the compassion and humanity of the staff here at UOW and your willingness to contribute to our communities,” Professor Wellings said.
All funds were donated directly to the NSW Rural Fire Service.