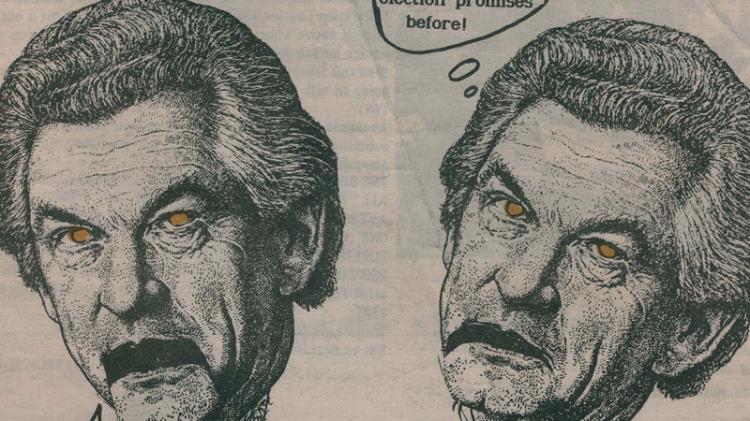 By students for students – since 1962

The Tertangala has been UOW’s student magazine – by students for students – since 1962. In the intervening decades it has been a forum for political, controversial, subversive and just plain funny commentary. We bring you five former editors, and the two current editors, of the Tert to talk about what the magazine meant to them and what the big issues have been over the years. 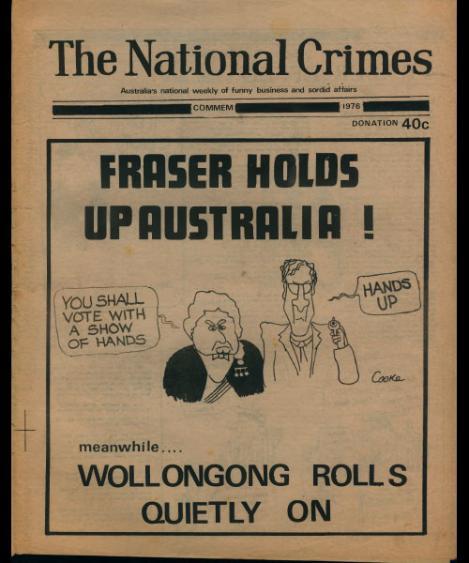 During the period when I was editor of Tert, student politics, both internal and external were highly polarised. The fees issue was strong on the agenda, as was Malcolm Fraser.

During that time, we had strong collaboration going on with all the universities between editors, Sydney, New South Wales and so on, sharing resources, ideas, cover art and graphics. Then of course we were also post-punk. Lots of album and band reviews.

The thing that sticks with me most, however, is the series of road trips I had to make in my old Datsun up to the printers in Marrickville. On one such expedition, I actually had a wheel fall off. Learned a lot about the business and production techniques up there. It was not unusual to bump into other editors at the site. Funny thing, [the printers] also did simultaneous runs of girly magazines.

In 1992 hundreds of Tertangalas sat in piles around campus, ignored by students fed up with boys’ club and Young Labor content, before finally being binned by cleaners.

On becoming editor in late 1993, I wanted Tertangala to be a paper that students would actually read. I dropped its tabloid-style headlines for bright cover images and replaced its alienating content with short campus news stories, feature articles and arts reviews that I hoped were inclusive and interesting.

I paid contributors, shifted printing from Sydney to Kiama and moved from cut-and-paste layout on an ancient light box to the then new desktop publishing program Quark Xpress. I also blithely ignored copyright issues (sorry, Maurice Sendak) and enforced principles of journalism I’d gleaned from News Sense, despite our small university not generating much hard news!

The issues of the early 1990s included activism against postgraduate legal fees, voluntary student unionism, the appointment of Fred Nile to the university council and the excesses of members of a previous SRC—all of which graced the pages of Tertangala. Sadly, we won only the last fight.

Almost 25 years later, journalism and print media are all but dead; Quark Xpress and the floppy disks everyone submitted work on are long gone. But I learnt a lot from my time on Tertangala, probably at least as much as from my degrees. Tertangala gave me a taste of a career in writing, editing and publishing—a steep learning curve in meeting deadlines, handling budgets, multitasking, and dealing with people and their egos. The media room saw not only computer crashes and stressful late nights but also plenty of nerdy, wordy fun and the beginning of lifelong friendships. 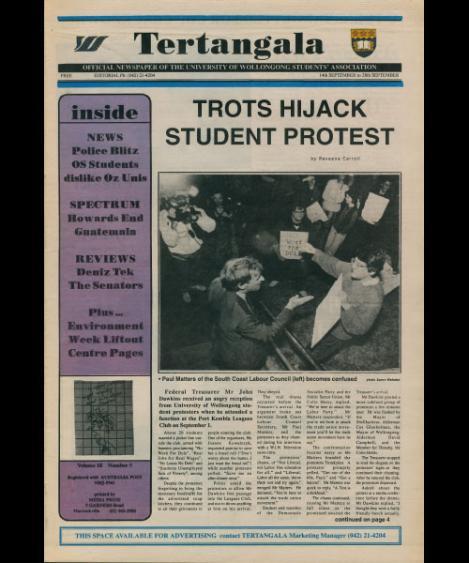 I became editor of Tertangala in 1995 when the student movement was beginning to arise from many years of slumber. The federal Labor government was moving to allow universities to charge fees for postgraduate degrees, and students were beginning to organise against this.

I viewed the student media as having an important role in facilitating the development of the student movement and in providing a clear alternative to the mainstream media. By giving space to political views and forms of communication that challenged the prevailing hegemony I hoped students would be prompted to reflect critically upon themselves and the world in which they lived.

But I also hoped that students would move beyond critical reflection to take action aimed at achieving political and social change. Therefore, one of the goals of the Tertangala that year was to portray student protest as something that was a completely normal part of the university experience.

As part of this agenda the Tert ran lots of articles and images critical of the Federal Government and of the power relations within the University itself – some of these were analytical, some were derisory and mocking. While it’s impossible to know with certainty the impact all this had, the Tertangala was a central part of campus life at the time and I feel it played an important role in the emergence of the student movement at Wollongong Uni in the mid-to-late 1990s. Editing Tertangala was a challenging, humbling, impossibly difficult and ultimately exhilarating experience.

It's always emotional reflecting on my time at Tertangala; my experience on the paper was the crucible that forged my personality, as much as it did my politics and my life's path. I was one of those students who more or less stumbled from a heated political discussion with an SRC rep into what was then a ratty wooden extension at the back of the old UniBar, the dare from a witness to the argument being to back up my opinions in print.

In 1995 I was a sub-editor, in 1997 I was editor, and by 2000 a second degree brought me back to uni and I found myself in a slightly less ratty SRC media office, doing the graphic design. No jobs I'd had before and only a couple I've had since have been as rewarding; when you're young and university is inspiring you to think about the structure of your society and the role you can play within it, the opportunity to consolidate those thoughts and offer them for dissection by your peers is formative - it provokes consideration not just about your own values, but those of your community, your tribe, and your generation.

When you're obliged to explain yourself in print, the question expands from: "What do I stand for?" to: “What, exactly, has made me stand for this?" - and to be provided a dedicated student newspaper as space for that reflection, as a writer or a reader, is very powerful. Certainly, the experience of working on the paper with the other student contributors, the - ahem - impassioned identities who'd thunder through the doors from time to time and the SRC people who'd come in and out taught everyone involved in that enterprise the priceless value of structures for student representation like the SRC and the Tert.

Elections, positions, titles, platforms, publications... these are the influences that do, actually, shape and resource the material world we're all obliged to live in, and gaining an appreciation as such a young person of how media power and institutional power works, even on such a local scale as a single campus, provides a framework and training to understand and wield the mechanics of social inclusion, and the potential for social change.

For kids like the majority of us who worked on the paper back then - state school, working class family, no connections to inherited wealth or power - we emerged from the sleepless nights at the layout computers, clashes with the SRC reps, budget meetings, angry letters and open feuds with insights and skillsets for exerting influence in the world that our families couldn't teach us and which our formal education could merely suggest. It’s wise to be distrustful of anyone making loud declamations against student unionism or independent student journalism; without exception, these are people invested in restricting participation in the prevailing structures of power, and to serve their own interests, not society's. 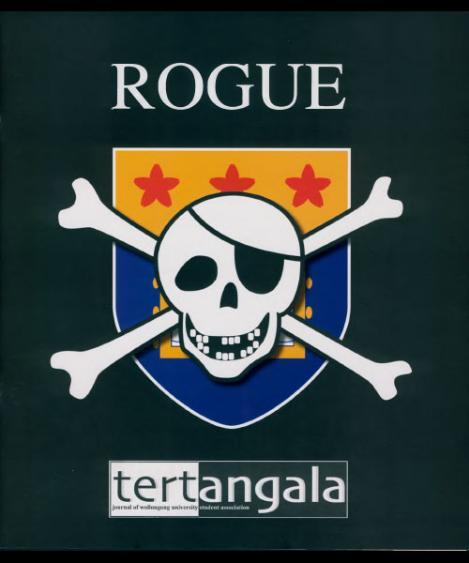 I edited the Tert in 2000 and was drawn to theme our editions by the big stories happening that year. We did a Y2K “millennium-bugged” edition which nearly broke everyone’s necks as we used zine techniques to create a non-digital paper when we didn’t have to. We looked at the Olympics, the GST and Reconciliation.

I regret we only discovered late that Tertangala is a made-up word, not remotely to do with known Aboriginal languages. I hoped to move to change it on leaving but time was up.

We also looked, when we could, at campus stories and views not necessarily of one political stripe - I wanted a fairly open, if progressive-leaning forum. In hindsight some of those inclusions impressed nobody except the provocateurs who penned them, back before trolling people on Twitter was an option.

Stories I remember being proudest of were ones of personal reflection and exploration – about student life, sexuality, the cultural and recreational excitements of campus life. Being a student, a young person, and expressing that with a journal for people’s enlightenment and entertainment was a vibrant time and we had some brilliant people contributing to the look, tone and content of our paper.

Any journalists or media editors have a responsibility to reflect the voice and values of their readers. A lot of literature surrounding the role of the media in democracy talks about media publications as having the power to influence the discussions that people have in their daily life.

In producing issues of The Tertangala throughout 2017, we’ve seen a lot of our readers and writers passionately engage with issues of inequality, inclusivity, gender, race and sexuality. As editors in the wake of the 2016 US election, we’re witnessing the mobilisation, passion and power of our generation as they fight for the world they not only want for themselves, but for others as well.

We’ve covered themes of diversity, travel and uprising, giving authors the platform they deserve to speak about these topics. The enthusiastic response we’ve received reflects that this is what our generation want to see. This is highlighted in our most significant stories of 2017, which are coverage of the recent 2017 UK general election, as well as budget cuts to university funding. It’s been an exciting year as Tertangala editors so far, and we’ve loved every minute of it.