Climate change, eucalypt bark and bushfires: Why do some trees die and others survive?

Harriet is a fire ecology researcher who is currently completing her PhD with the Centre for Environmental Risk Management of Bushfires.

She is investigating the effects of climate change on the resilience of fire prone eucalypt communities, with the support of principal supervisor Dr Hamish Clarke. She also has two co-supervisors, Doctor Rachael Nolan from the Hawkesbury Institute for the Environment, Western Sydney University and Doctor Meaghan Jenkins from the NSW Rural Fire Service.

Harriet came to UOW as a study abroad student in 2016-2017, while completing her Bachelor of Science (Honours) in Physical Geography from Lancaster University in the UK. While she was here she completed her Honours project under the supervision of Emeritus Professor Ross Bradstock, then Director of the Centre for Environmental Risk Management of Bushfires.

In 2019 she was invited back to complete a Master of Philosophy, but was soon able to transfer to a Doctor of Philosophy. In 2021, she received the Valette Williams Scholarship in Botany from the Australian Plants Society NSW to conduct some of her fieldwork, contributing to our knowledge of the ecology and conservation of native plants in Sydney and surrounding region.

Can you describe your research topic or question you are investigating?

Firstly, I’m investigating if certain combinations of bark traits, climate variables, fire regimes and topographic positions increase the likelihood of mortality in some eucalypt species. Bark traits include things like its relative thickness and density, as well as the type of bark, for example smooth, rough, stringy and so on. It’s thought that these bark traits protect the tree from fire like insulation, but it’s not known how these variables interrelate with climate variables, the type of fire, or a trees topographic location.

Secondly, I’m investigating if these differences make some species more vulnerable to range shifts under climate change. Range in this context means how spread out the species is across different locations with different conditions, and range shifts can mean that some species can’t cope with the change in climate variables, which can be indicative of which species are most in need of protection. 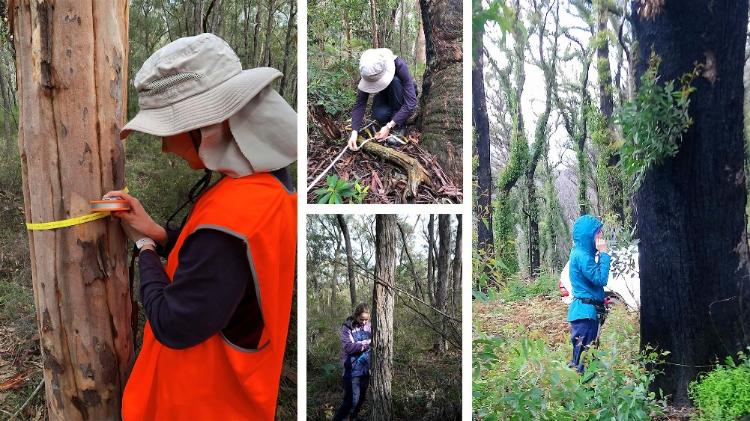 Pictured: Harriet out in the field collecting data for her thesis.

Where does your interest in this field come from?

I first became interested in conservation at a young age, however my passion for fire ecology began when I spent a year on exchange in Australia during my undergraduate degree. After finding out about the  (CERMB) from one of my subject demonstrators, I approached Ross Bradstock, then Senior Professor and Director of the CERMB, to discuss potential research topics and soon went on to complete an Honours project with him.

I was delighted to be given the opportunity to return to Australia to undertake further research in this field by doing a PhD here as well. Witnessing the devastation caused by the 2019-20 bushfire season only made me more passionate about the importance of fire ecology research.

How did you meet your supervisor?

Emeritus Professor Ross Bradstock, former Director of the CERMB and founder of the NSW Bushfire Risk Management Research Hub, was my principal supervisor when I commenced my PhD. I had already completed my Honours project with him and knew that we worked well together. He has since retired but continues to offer invaluable support as one of my co-supervisors.

My two other co-supervisors are Doctor Rachael Nolan from the Hawkesbury Institute for the Environment, Western Sydney University and Doctor Meaghan Jenkins from the NSW Rural Fire Service.

I was very pleased to have Doctor Hamish Clarke take over as my new principal supervisor when Ross retired due to his strong background in climate science. Hamish’s interest in science communication and his commitment to public interest science is an inspiration to me. It was great timing as he had already been working at the CERMB for several years and was looking for his first student to supervise. I want to thank Hamish for being so helpful and generous with is time.

Getting my first publication ‘Bark attributes determine variation in fire resistance in resprouting tree species’, published in Forest Ecology and Management (2020), was a very exciting moment for me. I felt so proud to see that my work had been selected and people were eager to read what I’d found. Receiving the 2021 Valette Williams Scholarship in Botany last year from the Australian Plants Society NSW was another exciting moment.

The most challenging part of my journey has probably been having to take such steep learning curves to gain new skills in things that I’m not too familiar with, like organising remote fieldwork and coding to analyse data. I would also like to add that doing a PhD is extremely independent, so have at times feel a bit isolated, and even more so during a global pandemic!

How do you think your research will make a difference?

I hope that my research will improve our knowledge of the spatial distribution of eucalypt bark traits to enable better prediction of eucalypt responses to increases in fire frequency and severity with climate change.

This would help to facilitate the protection of various eucalypt species with these traits by helping us to identify how at-risk different species are. Once known, management could be tailored to the needs of different communities. Ultimately, I’d like my research to contribute to enhancing government decision-making policies relating to the conservation of native vascular plant biodiversity in south-eastern Australia.

I’d like to expand my career network to include many others external to UOW. I’m seeking new opportunities to collaborate with academic and non-academic professionals, both now and in the future once I’ve completed my PhD.

What advice would you give someone considering doing postgraduate studies?

I’d advise them that they should find ways to maintain belief in themselves, keep motivated and stay positive in preparation for the challenges that they will likely face. It’ll be important for them to allow themselves time to engage in things they enjoy regularly and have a good support network. Don’t hesitate to ask for help if something is troubling them, no matter how small it is. Our mood can not only impact our mental health but also how focused and productive we are too. I think a lot of a postgraduate students’ success is to do with their attitude towards the work itself and not their ability to complete it.

Hamish is the Deputy Director of UOW’s  and is a Work Package leader in the NSW Bushfire Risk Management Research Hub. He is interested in bushfire risk, climate change and the effectiveness of our attempts to manage them. Hamish’s work to date has covered fire weather, ignitions, fuel moisture, climate change and prescribed burning.

Prior to joining academia, Hamish worked for the NSW environment department as Senior Climate and Atmospheric Scientist. He is committed to public interest science and effective engagement with decision-makers. Hamish runs the Blue Mountains community science initiative Science at the Local and is the creator of the Four Friends of Fire science animation series.

How does Harriet’s research relate to your own research?

Harriet and I are both interested in how fire regimes will respond to climate change. She takes a much more botanical focus than me – she’s out and about in the field while I toil away at my desk most of the time!

Can you tell me about Harriet’s success so far?

Harriet has a lot to be proud of. She has navigated studying in a foreign country, transitioning from a Masters to PhD, COVID disruptions to fieldwork, winning a PhD scholarship as well as a prestigious award from the Australian Plants Society

What makes a successful PhD candidate?

Hard work, one eye for detail and the other eye for the big picture, an ability to roll with the punches, a good support network, and if possible, a fondness for your research topic and the methods you are using to study it!

How do you guide candidates on their journey?

I am something of a rookie supervisor and so have taken a leaf out of previous supervisors’ books. I try to be a consistent, supportive presence, smoothing their path and opening doors where I can.

What are the best things about being a researcher?

It is an immense privilege to be paid to try to understand the world. Although it’s hard, I’ve been able to strike a pretty good work/life balance, participating in school drop-offs and various home and parental responsibilities, which is important to me. I’ve also been very fortunate to work with clever, connected and supportive people throughout my career.