The seven-episode series includes interviews with seven CABAH researchers, a centre based at UOW.

A new podcast series by two pun-loving scientists will take listeners behind the scenes of some of the world’s most advanced research into the natural and cultural history of Australia and its nearest neighbours.

The seven-episode series includes interviews with seven CABAH researchers, a centre based at UOW that brings together more than 130 researchers from universities and partner organisations across Australia and overseas and has more than 80 research projects underway.

In Supplementary Information (Twitter:@SuppInfoPod), the centre’s first podcast series, Dr Jankowski and Dr Long cover everything from Indigenous fire management in Tasmania and ecosystem management with wild animals in the Bass Strait Islands to island hopping possums and the evolution of the dingo.

“Our goal is to share knowledge and experiences of some of CABAH’s researchers who are helping reveal Australia’s epic story. We want our listeners to finish each episode having learned at least one new thing about Australia’s natural and cultural history,” Dr Jankowski said.

“Each episode teases out the stories and experiences of the researchers that are rarely captured in academic papers.”

Dr Jankowski, whose own research is looking at landscape change and the archaeological record in the Willandra Lakes, NSW, decided to start a podcast in 2020 when opportunities to do fieldwork were limited.

“There’s some amazing work being done across CABAH and I thought it would be worth speaking to a few people about their research but concentrate on the stories and personal experiences that aren’t usually captured in academic papers.”

Dr Kelsie Long, who uses fish remains and shells to build up long term records of climate and lake level change, said each episode is a deep dive into the past 130,000 years and will help people understand some of the research that’s uncovering Australia’s past.

“It’s been great to be able to talk to some really amazing researchers and spread the word about how their work is helping us piece together our understanding of Australia’s past.”

Episode 1 of the podcast - The Dogma of Dingoes - features Professor Kris Helgen, Chief Scientist and Director of the Australian Museum Research Institute at the Australian Museum, who reduces some of the mystery around the dingo, walking listeners through the evolution of dogs from wolves and the arrival of dingoes in Australia.

In episode 2, ecologist, ornithologist and PhD candidate Matthew Fielding talks about roadkill, ravens, currawongs and the pros and cons of trophic rewilding, a form of ecosystem management where top-level predators are reintroduced to rebalance an ecosystem like that found in the Bass Strait Islands.

In episode 3, PhD candidate Holly Jones-Amin, a Senior Conservator at Grimwade Conservation Services in the Faculty of Arts, Melbourne University, speaks about the careful reconstruction of a thousand-year-old pot excavated from an archaeological site in Caution Bay, Papua New Guinea.

Dr Jankowski and Dr Long speak to Dr Ariana Lambrides in episode 4. Dr Lambrides is a postdoctoral researcher at James Cook University (Cairns Campus), about her work pulling together the data on fish remains excavated from archaeological sites along the QLD coast since the 1950s.

Associate Professor Michael-Shawn Fletcher, a Wiradjuri man who works as a palaeoecologist in the School of Geography at the University of Melbourne, features in episode 5 and speaks about the long-term interactions between humans, climate, disturbance and vegetation in the Surry Hills region of Tasmania, and Australia more broadly.

In episode 6, PhD candidate at ANU Matthew Adeleye explains the journey of pollen grains – from ancient plants to mud at the bottoms of lakes to the microscope slides examined by palynologists to reveal what plants were present in a landscape thousands of years ago.

In the final episode for the series, listeners will hear from the ANU’s Dr Shimona Kealy, who tells the story of the cuscus – a small possum found in northern Australia, Papua New Guinea and various islands across southeast Asia that was brought to the islands by humans thousands of years ago.

Supplementary Information will be available via Anchor, Spotify, Google Podcasts and Apple Podcasts. 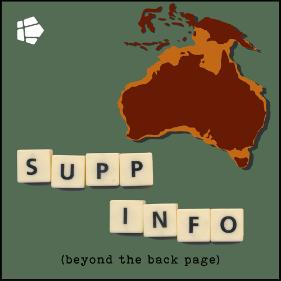