From Wollongong to the world

Dr Mary-Anne Land has just returned to her hometown of Wollongong, following a global career that has seen her help solve some of the world’s biggest crises through public health.

A Wollongong local with a keen interest in science and health, it was an easy decision for her to enroll in exercise science at the University of Wollongong (UOW).

“I have to say, it was the best university experience,” she says.

After graduating and a year of travel, she landed a job with American radiology company Nighthawk, which scanned patients in the US, that Dr Land could then read remotely from her base in Sydney or Zurich.

“The anatomy of exercise physiology enabled me to triage the scans and identify massive traumas, and because of the time difference, it meant no radiologists had to work overnight.”

While it was a rewarding career, Dr Land felt the urge to put her love for health on a larger scale. A decade after graduating exercise physiology, she went back to UOW and enrolled in a Master of Public Health.

“I absolutely loved it,” she says.

“I had the opportunity to work in health care at an individual level where you are impacting one person at a time. Public health enables you to impact populations, through the availability of clean drinking water, safe and nutritious foods, and vaccines to prevent chronic diseases, and road safety measures to prevent horrific crashes. I had incredible teachers at UOW, in Karen Charlton, Vicki Flood and Heather Yeatman, all legends in public health.”

Dr Land then went on to do a PhD in public health, before taking up a position at the World Health Organization (WHO).

“My first role looked at eliminating cervical cancer in the Africa region by implementing new diagnostics, a project funded by the Bill and Melinda Gates Foundation. From there I  joined the Director-General Dr Margaret Chan as her executive officer. During this time, I gained extensive experience in diplomacy, geopolitics and international policy, working across the globe with Heads of States,” explains Dr Land.

“It was really interesting to see the dynamics of leadership and influence, and how health is used as leverage to make different countries come to the party.”

“Then as part of Dr Tedros Adhanom Ghebreyesus leadership, his commitment to WHO was to eliminate cervical cancer. So, I went back to work in cervical cancer elimination, which was amazing and probably my greatest achievement.” 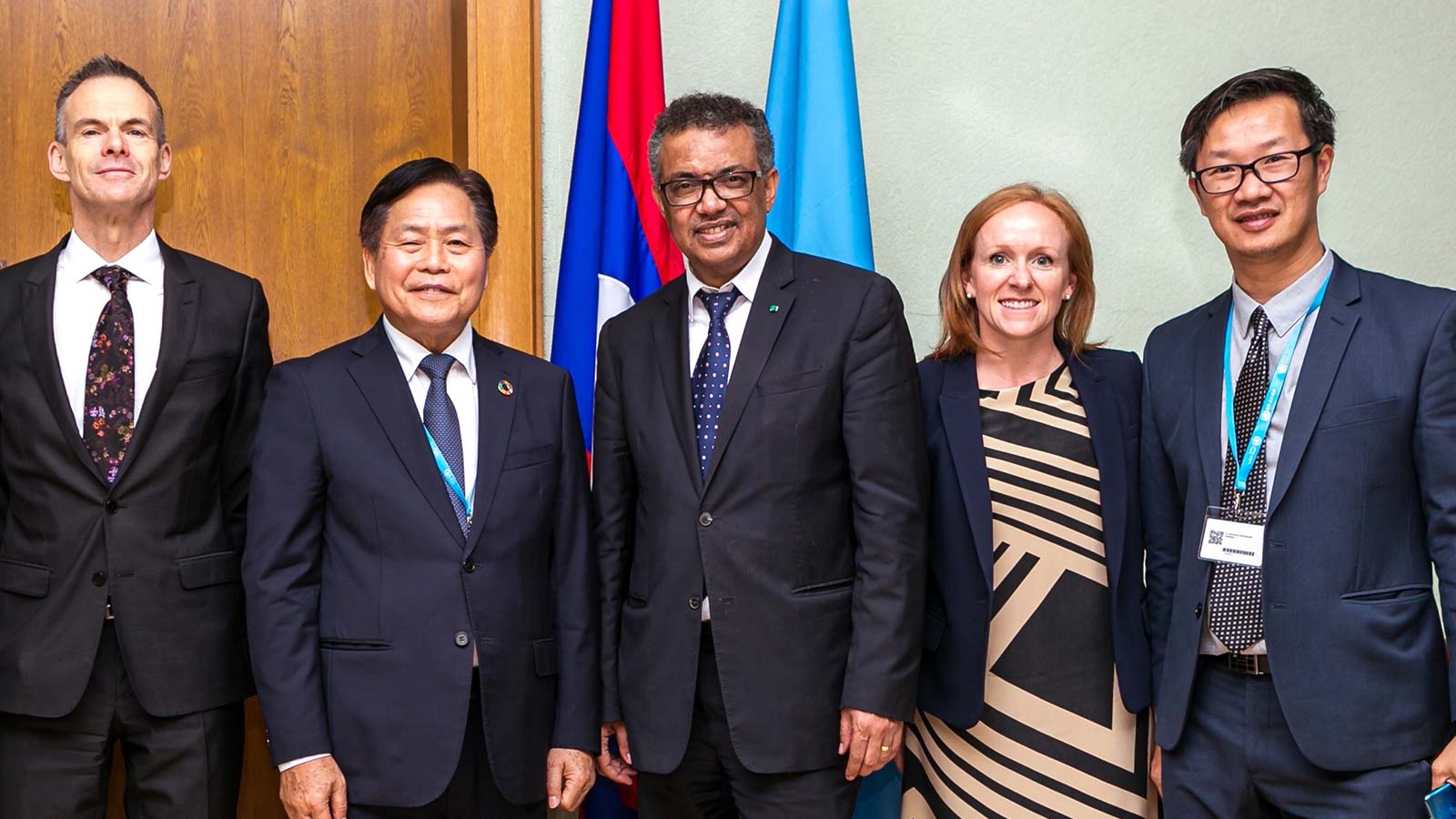 A world without cervical cancer

Cervical cancer is currently the only cancer that can be eliminated through prevention and early intervention; however, Dr Land says there are still huge equity issues. Two years ago, WHO released a global strategy to eliminate cervical cancer.

“We have vaccines, we have early screening and effective treatments, and making that accessible to everybody is key. In July, Australia opened up self-collection to any person with a cervix, which is a game changer for the early detection and treatment, to prevent needless suffering,” says Dr Land.

“Around the world, there are amazing grassroots level groups like the Teal Sisters in Zambia and in Lesotho, who advocate for access to, and uptake of affordable vaccines, screening, and treatment.”

Dr Land has seen the effects of cervical cancer prevention in action. Since the HPV vaccination was introduced in the UK in 2008, the latest research shows a substantial reduction in cervical cancer, indicating the program has almost eliminated cervical cancer in women born after 1995.

“It is a long-term plan, but we have governments that work in four-year cycles. In public health, it’s all about incremental positive change. Unless you have long term vision , you’re not going to get there,” she explains.

“In Australia, it is predicted elimination will be reached as early as 2028, though this may have been impacted by the COVID-19 pandemic on vaccination and screening programs. But it is highly probable this won’t include Aboriginal and Torres Strait Islander women. Data or lack of, is significant and persistent within country inequities.”

Where science can take you

Dr Land spent five years working in Switzerland at the WHO headquarters, and travelled the world in her role, which included being on the ground during the Zika outbreak in Brazil, through the Ebola crisis, and Yellow Fever in Angola.

She returned to Australia, working for the Department of Health in Canberra, before returning to the WHO as a consultant in 2020, where she now works completely remotely from her home in Wollongong. Dr Land attributes her globetrotting career to an interest in science.

“I would encourage anyone to do science. It’s a huge opportunity because you’re not locked into any one science, they can all blend together so you can make what you want of it,” she says.

“That’s the best thing about science – it’s not so structured. You can cherry pick the things you’re most interested in and formulate your own degree, taking it into medicine, engineering, or anything you want.”