Recapping the University's highlights throughout 2021

From humble beginnings to international recognition as one of the world’s best modern universities, UOW had a lot to celebrate this year.

UOW’s School of Law celebrated its 30th anniversary in 2021. The vision of the School’s Foundation Dean, the late Professor Jack Goldring, was to provide social justice and access to legal education for all in Australia. This vision continues to act as the core pillar of the School today.

AHSRI was engaged by the Royal Commission into Aged Care Quality and Safety, and directly influenced several key recommendations in the Commission’s final report.

Despite the many challenges the COVID-19 pandemic presented to the University’s research efforts, 2021 had many highlights.

In April, researchers from the Centre for Medical Radiation Physics and colleagues at ANSTO gained national headlines for a promising new approach to treating brain cancers: a magnetic nanoparticle that could be used in combination with radiation treatment and heat therapy to target some of the most aggressive and deadly cancers in Australia.

Also in April, scientists from the ARC Centre of Excellence for Electromaterial Science and UOW, in partnership with seaweed bioinks collaborators Venus Shell Systems, garnered international interest for discovering that molecules from a seaweed species could be used to heal wounds.

In a landmark study published in Nature in June, researchers from the Centre for Archaeological Science, working with scientists from Germany and Russia, used ancient DNA recovered from sediment samples to reveal the epic history of Denisova Cave in Siberia. One of the world’s most significant archaeological sites, Denisova Cave was shown to have been occupied by three groups of humans – Denisovans, Neanderthals and modern humans – over the past 300,000 years.

Meanwhile a study by biologist Dr Anastasia Dalziell found that male lyrebirds used their exceptional mimicry skills to trick potential mates and gain a reproductive advantage, which generated extensive media coverage across the world. The research, published in Current Biology in February, found male superb lyrebirds imitate a “mobbing flock” to make female birds believe a predator may be nearby.

In June, UOW was selected to help develop the aged care nursing workforce under a new Federal initiative. This program will guide nurses in their first year of clinical practice through mentorship, professional development, and specialist education to help them increase their skills and capabilities.

In July, UOW secured funding from the NSW Department of Education to develop the NSW Cyber Academy in partnership with Deloitte and TAFE NSW. The program has been designed to embed both the technical skills and the assessment and quantification of human capabilities to produce effective cyber security professionals.

UOW also received funding in July for a new training centre to advance Australia’s transition to a clean energy future. The ARC Training Centre in Energy Technologies for Future Grids will train the next generation of industry leaders and specialists in future grid technologies for renewable energy generation, transmission and distribution.

In the same month, Professor Patricia Davidson announced a Vice-Chancellor’s Leadership Scholarship to inspire young leaders and give them the knowledge, skills, and worldviews to be the future leaders from and for the Illawarra.

The University fulfilled its vision to build a world-class research and learning environment for current and future generations to come.

A new state-of-the-art creative arts and social sciences building was opened and dedicated to retiring UOW Chancellor, Ms Jillian Broadbent AC, in recognition of her outstanding contribution to the University, naming it the Jillian Broadbent Building.

The University envisions the building becoming a key driver of innovation and growth in the Illawarra region thanks to the enormous opportunities it provides for creative expression and skill development. 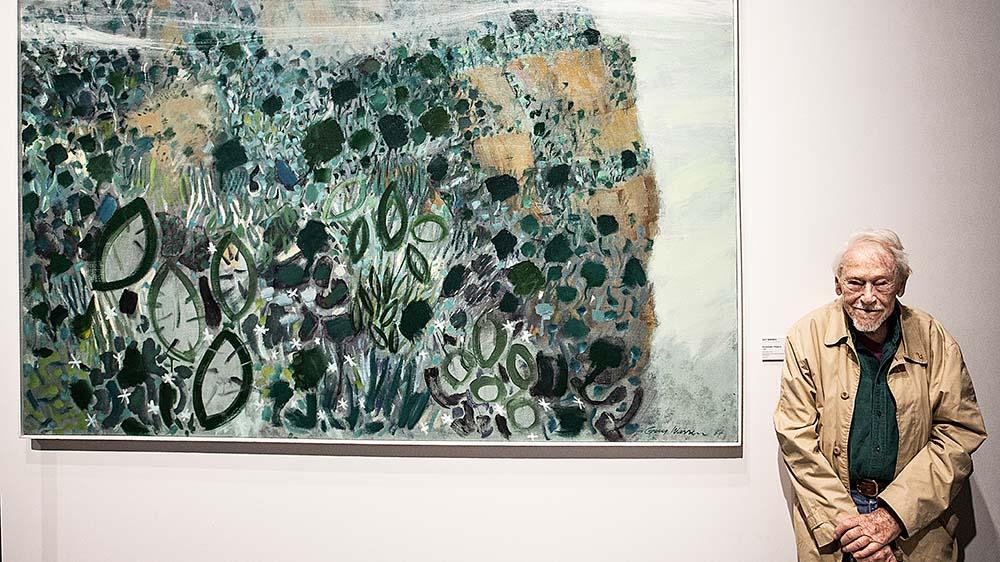 The University enjoyed the rare sight of four Vice-Chancellors – past, present and future – coming together to celebrate the life of one of the UOW community’s most storied members, renowned artist (and Director of the UOW Art Collection from 1992 to 2005) Guy Warren AM.

Mr Warren was on hand to launch the opening of the exhibition on 5 May, celebrating his life and art in his 100th year.

In January, Professor Elizabeth Halcomb was named in the 2020 List of 100+ Outstanding Nursing and Midwifery leaders around the world; Professor Tracey Moroney, Head of the School of Nursing, and mathematician Associate Professor Philip Laird were awarded the Medal of the Order of Australia (OAM) for services to their respective fields; and Senior Professor Sharon Robinson was named winner of Wollongong City Council’s Australia Day 2021 Innovation Achievement Award.

In March, The Australian Academy of Sciences awarded Dr Nicolas Flament the 2021 Anton Hales Medal in recognition of his outstanding contribution to the geosciences.

In May, UOW was named one of the nation’s most inclusive employers for gender, sex and sexuality diversity, receiving a Bronze Award at the Australian Workplace Equality Index.

In June, Bushfire risk researcher Dr Hamish Clarke won a 2021 Tall Poppy Science Award; in the Queen’s Birthday Honours list Chancellor Ms Christine McLoughlin was made a Member in the General Division of the Order of Australia (AM) for service to business, the not-for-profit sector, and women, and Senior Professor Brin Grenyer received a Medal of the Order of Australia (OAM) for service to psychology.

In the same month, Professor David Currow FAHMS was named Deputy Vice-Chancellor for the new portfolio of Health and Sustainable Futures, and Professor Eileen McLaughlin was appointed Executive Dean of the Faculty of Science, Medicine and Health.

In September, Senior Professor Gursel Alici was named Executive Dean of the Faculty of Engineering and Information Sciences.