Amy and Beth Glancey are a formidable force. The identical twins share far more than a birthdate and mirror-image DNA – both are articulate, insightful communicators, positively crackling with energy, ambition and the confidence to achieve anything they set their minds to.

And since completing their studies in 2004 with near-matching degrees – a Bachelor of Arts in Communications, Beth’s incorporating psychology, and a Master of Journalism – each has carved out a career trajectory that is nothing short of meteoric.

Amy is Chief of Staff at Atlassian, the multi-billion-dollar tech titan driving the industry’s future in Australia and beyond. She is at the nexus of influence in one of the world’s most innovative companies, her role a confluence of leadership operations, special projects and acting as a conduit – and translator – between Founder CEOs Mike Cannon-Brookes and Scott Farquhar, their executive team and the business.

“I sit with Mike and Scott across almost every aspect of the business, so I have this full 360-degree view,” Amy explains.

“I don’t own a specific agenda so I can look at things from a neutral viewpoint. It’s like a massive game of connect-the-dots: zooming out, seeing the gaps and linking it all together.”

As Atlassian continues to scale exponentially, with now more than 6000 employees across the globe, it’s a weighty and evolving
responsibility.

“The bigger the company gets, the further the space between the founders and everyone else increases. It can become an echo chamber. Part of my role is to hold up a mirror and give them direct feedback, and that’s not always easy. You need to be confident enough in your judgment, ability, intellect … whatever it is that you bring to the table,” Amy explains.

It’s a perfect fit for the self-described storyteller and story-listener that does everything at pace. Having begun her career in more conservative, hierarchical public and private sector settings, it was joining Groupon in 2012 to lead communications across Australia and New Zealand that gave Amy a taste of what the right ecosystem can unleash.

“At that time, Groupon was lauded as the fastest-growing company in the world, ever,” she recalls. “It was like joining a rocketship – one that genuinely fostered and encouraged young talent. If you wanted it and were capable, you got more and more.”

Amy progressed rapidly at Groupon, making the senior executive team as Head of Communications Asia-Pacific within little more than a year.

“It was a very high-risk, high-energy environment and I just thrived in it. I’ve always been someone to jump at an opportunity, to see a crack in the door and dive through it.”

When Atlassian came knocking, Amy’s initial reaction – with no background in software products – was to say no. But, the door open, she did her research and was energised by what she found.

“Mike and Scott were really vocal and progressive. I had this vision of building a brand around them, positioning them as stewards of the tech industry, anti-establishment… breaking the rules, but the tech way.”

She pitched the idea, and the rest is history. Over the next two years as Director of Communications Asia-Pacific and then Global, she immersed herself in the founders’ worlds and became a trusted sounding board and counsel. Her promotion to Chief of Staff was the natural next step in her growth, positioning her as a key player in Atlassian’s executive team and in the company’s push for a thriving Sydney-based Silicon Valley-style tech precinct for Australia.

As a young woman killing it in the male-dominated tech space, Amy is a shining example of just what’s possible when you smash through barriers.

“You need to be bold, to back yourself and your ability to learn and grow, in a company whose values align with yours – that’s where you can thrive.”

Leading from the front

As General Manager, Australia and New Zealand for cult beauty brand, Sephora – part of French conglomerate LVMH, alongside Louis Vuitton, Dom Pérignon and a host of other luxury brands – Beth Glancey is behind the region becoming one of the fastest growing for the business.

“Sephora has 24 stores across Australia and New Zealand and we’re continuing to expand rapidly,” Beth explains. “We have very aggressive growth plans to expand our physical and digital experience across ANZ and offer all our customers access to the world’s most loved beauty community.”

This prodigious growth is made even more remarkable by the fact that most of Beth’s first two years at the helm has been amidst the tumult of a global pandemic.

“I’ve held the livelihood of our team in my hands over the past 18 months, and that doesn’t come without burden and emotion. You have to show up with empathy and make the tough decisions from a place where people respect that you’re doing it for the right reasons. And at the same time zoom out, look ahead and pivot the business to keep it moving forward, to find those green shoots amongst the red and nurture them.”

Like Amy, Beth found her early career progression stymied by traditional hierarchies where, despite her proven talent, she was deemed too young for a seat at the executive table. So she leapt to Benefit Cosmetics – also part of the LVMH stable – in 2015 as its Australian Marketing Director, unaware she was part of a
succession plan. Just 10 weeks into the role, she was tapped to take over as General Manager.

“I panicked; every fibre of my being was saying no, I’m not ready. But they said they saw something in me, that despite not having general management experience, they knew I could do it. It was incredibly empowering to know they’d support me to fail, learn and grow.”

And grow she did. Beth built a rich, thriving culture and a highperforming team, developing Benefit to be one of Australia’s fastest-growing cosmetics brands, and the region to be among the company’s top markets. Before long, LVMH asked her to weave the same magic at Sephora, only on a larger scale.

Pregnant with her first child, she said yes – but with a caveat: that they wait until the baby was six months old for her to return from maternity leave.

“It took courage and strength to set my boundaries, and I was riddled with guilt – as women, we often don’t feel we can ask for what we want, particularly when it comes to our dual role as boss and mum – but I was prepared to walk away. I stuck by my decision, and they agreed to wait. It was such a rewarding learning process, personally and professionally.”

As a strong female leader, and in her capacity as Australia and NZ Ambassador for the parent company’s global equity initiative EllesVMH, Beth is passionate about empowering other women to shine.

“In my first year as Benefit GM, I was riddled with impostor syndrome. I want to show that even the most successful women can doubt themselves, that it’s ok to not have all the answers but still want the promotion.” 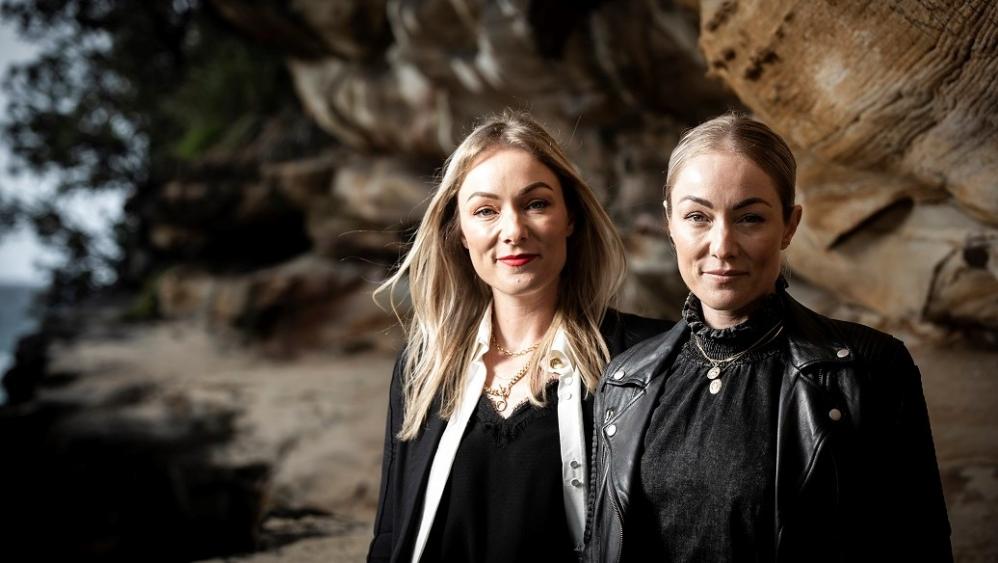 For Beth and Amy, being a twin engenders a special kind of confidence.

“You grow up with your number one supporter always unconditionally by your side,” Beth says. “And when a carbon copy of your DNA can do something, then implicitly you know you can do it too because we’re genetically so similar,” Amy adds.

They’re competitive, but not in the traditional sense.

“We’re competitive for ourselves almost as a unit, in the way that a high tide raises all boats,” Amy says, though she – the elder of the two by seven minutes – quips that she’s “just 5 per cent better.”

Beth laughs. “Our happiness is intrinsically linked,” she shares.

“The thought of one of us succeeding and the other failing is crushing. And I think that encourages us to keep up with each other and creates this energy and momentum around us. And for the record, I rebut the 5 per cent.”

Wherever that momentum takes them next, one thing is certain: the only way is up.