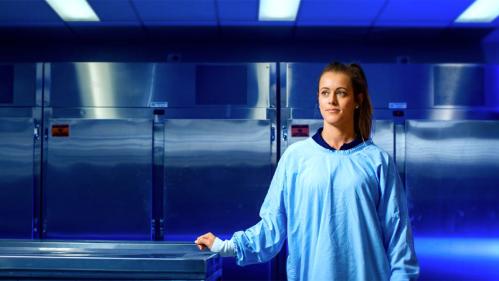 The cutting edge of anatomy

As an outdoors country girl growing up in Wagga, Katie Gaskin’s limited television time would play a pivotal role in moulding her unusual career ambition.

“At first I wanted to become a civil engineer, but by the end of high school, thanks to shows like CSI, I liked the idea of becoming a medical examiner who determines how people die,’’ she says.

As it turned out, that was not too far off the mark. 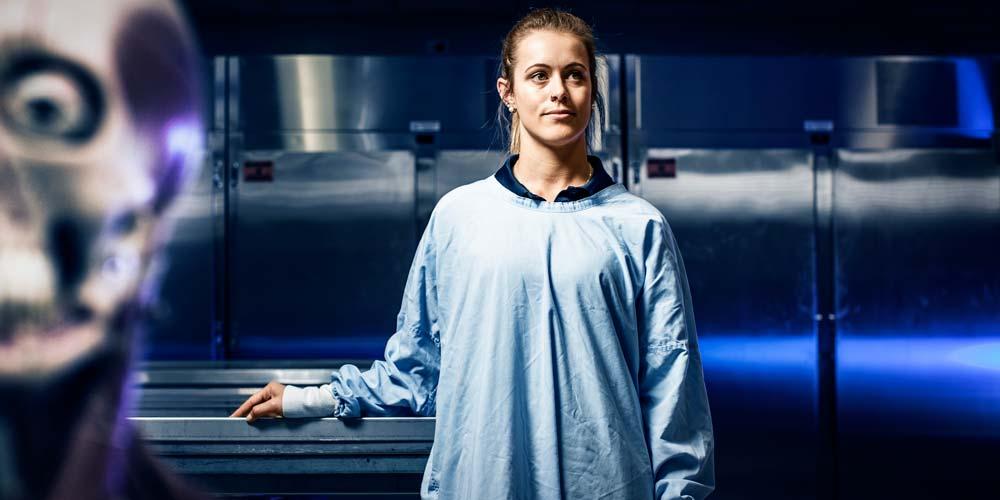 Soon to be published in scientific peer-reviewed journals, Ms Gaskin’s work reveals dissections from nine cadavers at a level of detail not conducted since British surgeon Astley Cooper’s paper Anatomy of the breast in 1840.

Her extensive quantitative data that took four years to gather adds new insights on a range of structural elements in the breast including the concept of the ‘internal bra’ support system. Her work is seen as having the potential to translate into improving breast surgery outcomes.

Gaskin, 26, grew up on a farm in a family of seven children. Her mother is a school principal and her father, is now Director of Catholic Education in Tasmania

When it came to choosing a university course, Ms Gaskin decided on a Bachelor of Health Science degree which, by election, involved many hours in the anatomy laboratory.

“I still remember the thrill of seeing a dissected body for the first time and seeing what was inside of me in a way I couldn’t have visualised,” she says.

Her first hands-on dissection on a cadaver was in the last semester of her undergraduate study. It was a group project where they had to reveal a specific anatomical structure on a single cadaver specimen.

“I remember the terror of holding my scalpel and thinking ‘I’m going to mess this up’,” Ms Gaskin recalls.

Over time she relaxed into the job and her hands soon surpassed her eyes in sensing tissue.

“If I was looking, for say, an artery surrounded by fat I’d find it quickly through texture and feel. The same goes for the little nerves running through the tissue,’’ she says.

Ms Gaskin proved so adept at the art of dissection she and a few other students when they finished their undergraduate degree were asked to stay back in the holidays to fill in as casual anatomy technicians.

In her second year of her Masters degree, Ms Gaskin joined the laboratory staff full time while continuing her research part-time.

Senior lecturer in the Faculty of Science, Medicine and Health, Dr Deirdre McGhee describes Ms Gaskin’s attention to detail in dissection as extraordinary.

“With her high level of skill, Gaskin would happily spend endless hours on the intricate dissection needed for her thesis,” says Dr McGhee.

“Her research is unique because of the extensive quantitative data she collected…photographs of Gaskin’s dissections show the internal structure of the breast (where the breast attaches to the chest wall) to form an internal bra support system,’’ she says.

Gaskin’s passion for anatomy as the keyhole to knowledge about how the body functions is palpable.

“You can’t know the body unless you get up close and personal to feel its structure and see it three-dimensionally,’’ she says.

“MRIs and x-rays are terrific tools but they don’t compare with studying the human body first-hand.

“The femoral artery is a good example. It snakes its way down the leg rotating around the limb and it separates off into many different branches which do the same thing,’’ she says. “I don’t think you can truly understand that structure unless you can run your finger along the artery and follow it to the toes.”

Gaskin says Astley Cooper’s 19th Century study (which relied on drawings) represented a valuable starting point, but one that needed to be updated.

“The majority of the information that we hold as gospel about the structural anatomy of the breast was discovered by Cooper in 1840, but that’s just not good enough by any scientific standard these days,’’ she says.

“My goal throughout the thesis was to first verify Cooper’s findings. His descriptions are really poetic which sometimes confused people so I also tried to clarify the terminology.

“But the main aim was to produce evidence-based quantitative data.”

Ms Gaskin’s work is likely to benefit generations of surgeons by giving them a deeper and clearer understanding of the breast structure.

“I’m hoping eventually my work will be written into anatomical textbooks to become baseline knowledge for medical science students, surgeons – or anybody who is interested in the breast structure,’’ she says.