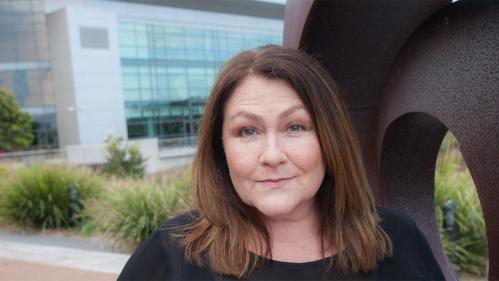 At 28, Sally Riley left her family home in country New South Wales and headed to the University of Wollongong with the idea of becoming an actor.

A few decades down the track, and yes, she is reading scripts, mountains of them, but in a role that has literally changed the face of Australian television with groundbreaking diversity in casting and programming that finally puts Indigenous names firmly in the credits.

“I realised I wasn’t the best actor in my creative arts group at uni and although I liked stage managing, I could see the director was the one in charge, the one with the vision,” says the now Head of Drama, Comedy, Indigenous at ABC Television.

Riley has the final go-ahead on scripts and pitches from all over Australia covering drama and comedy with plenty of room allocated for diversity.

“Looking back, uni prepared me well for this job,” says Riley.

“I got to do lots of jobs on many productions and to hang out with loads of talented creative people - that for me was heaven.” Riley, a woman of the Wiradjuri nation, was born in Narromine near Dubbo surrounded by a big, boisterous extended family on both sides whose children ran wild outside all day on bikes or swam and fished in the Macquarie River.

Her father, a shearer, and her mother a housewife - both from poor backgrounds who took jobs before they hit high school - instilled in Riley and her three siblings, a strong work ethic and sense of self.

“That idea of making your own way through working hard and being proud of who you are and where you came from was vitally important in our family,” says Riley.

“It wasn’t easy for Mum because Dad’s work was seasonal so she made all our clothes including even our school uniforms and kept what she called a ‘cunning kit’ of money she stashed away for the really tight times.”

Television in Riley’s early years boiled down to two channels including the ABC.

“My mother who was non-Indigenous loved musicals and every Sunday we’d watch the likes of Gene Kelly and Fred Astaire. Our favourite for my sister and I was Calamity Jane with Doris Day – we’d sing her songs while driving around everywhere,” Riley recalls.

The fact that there were almost no Aboriginal faces on the screen did not sink in until later.

“My parents were quite protective but when I was about 12 or 13, I became a bit more politicised and noticed that and other things, particularly at school. I’m pretty fair skinned in comparison to my cousins, but in a small town everybody knows who you are and what family you come from, so you do feel the racism,” says Riley.

She was referring, in part, to the snide comments she would overhear from some people about her Aboriginality.

"For me diversity is about representing fully fleshed-out characters from diverse writers who tell their own stories and evoke some sort of emotional response – that’s the way you change perceptions."

“That’s when I started to see the world very differently and to question why there were no black fellas on television, in churches, parliament or teaching in schools,” she says.

“I still notice that everywhere because that’s part of my job now. I really notice when a show has an all-white cast, or when there is diversity in casting. Even how a show is promoted in the media says a lot about the producers, the broadcasters and the show itself.”

One of Riley’s defining experiences a few years after her father died and after she left school was a three-year road trip around Australia with her then boyfriend to view as many Indigenous art sites they could find, cave paintings in particular.

They sought permission from various Indigenous communities to drive into their country and find the art sites that would often involve kilometres of hiking.

“There were the obvious ones in Alice Springs and Kakadu, but we were also allowed to go into ones you would never get near today,” says Riley.

One site in particular, located in what seemed the middle of nowhere where the spear grass towered over their car, left an indelible mark.

“It was a massive overhang with a huge gallery of paintings and there was a big, flat roof underneath with all the paintings on the ceiling,” says Riley.

“We just lay there on the rock and then I noticed something in a crevice. It was actually a burial cave and it was quite affecting. We got out of there quick smart. I think the old man who gave us permission to go there didn’t really think we’d find it.

“It was deeply spiritual because you have your history and the history of Australia sitting right in front of you as you try to decipher the story from the different images.”

Riley’s early career after graduating from UOW was in independent film-making where in 2000 she took out the AFI Award for Best Short Fiction Film for Confessions of a Headhunter, exploring the conflict between Indigenous people in Perth and colonial culture, but with a clever “black humour” twist.

That mix of message with a lively, fresh approach has become Riley’s key to engagement.

“I really want to work on productions that have something to say but first and foremost it has to be entertaining because nobody wants to be hit over the head with a message,” she says.

“I’m always looking to break new ground in diversity, particularly in the Indigenous area. For me diversity is about representing fully fleshed-out characters from diverse writers who tell their own stories and evoke some sort of emotional response – that’s the way you change perceptions.”

Sally considers Redfern Now as one of her watershed moments. It first screened in 2012 and won a Logie Award for Best Outstanding Drama Series in 2014 as well as a swag of other awards.

“It was my first television show and the first that had been written, directed and produced by Indigenous film makers, Blackfella Films,” she says.

“That show put us on the map in terms of the television landscape in Australia.

“Before it went out, we were warned to lower our expectations in relation to audiences, but by morning we were all screaming with joy when word came in about the really high ratings.”

When asked what she loves most about her job, without hesitation she answers ‘my team who are incredibly dedicated and hardworking people’.

The only dark clouds these days, she says, are budget cuts which constantly hover overhead.

“The word ‘cuts’ never fails to fill me with dread,” says Riley.

“You can be developing a show for a year to 18 months before production which is a long time to sit with people who are pouring their whole lives into these productions.

“It’s their livelihoods we’re dealing with because all of our shows are done with external producers. They work hard and the things they are working on are very close to their hearts so the hardest part of my job is to turn around after budget cuts and say ‘no’.”

Beyond work, Riley lives a quiet but comfortable life in Sydney with her son, Eli, 20, who is in his third year at the Australian Film Television and Radio School.

“I’m talking to people all day in my job which means I’m constantly ‘on’. So, on days off just sitting on the sofa or meeting up with friends is good,” says Riley.

“I do make time to get back to Narromine, but not as much as I’d like to since my Mum died a few years ago.

“Unfortunately, these days it’s usually for funerals, but when I do, I’m always surrounded by family and extended family which is very grounding.”