Mem Fox on mice, migrants and the magic of reading aloud

At the time, a young, unpublished Mem Fox was sending her first manuscript out to publishing houses, hoping to add Hush the Invisible Mouse to the landscape.

The story followed Hush on her quest to become visible again. She travels all over the world, tasting different cuisines in a bid to break the spell. At last she lands on Australian shores where she finds the secret to visibility.

But time after time, Fox sent out her manuscript only to be rejected. The woman who would become one of Australia’s most beloved authors received nine rejection letters for her first manuscript.

“[It was] totally humiliating,” she says. “I think every writer who’s ever sent off a book thinks that they are God’s gift to writing. They are God’s gift to literature. Every single time was simply ghastly.”
“Well, when the tenth publisher finally said yes, I should’ve been over the moon.”

But the publisher asked for extensive changes to be delivered in just one weekend. Fox had to cut the length; make the story “lyrical”; and change the main protagonist to a cuddly Australian animal.

“I was so excited that I did it,” Fox says. “The mouse became a possum, I cut it by two thirds, [I] felt as if I was bleeding because every word that I’d written I had loved, but I just had to chop it. The lyricism [they asked for] I absolutely understood. They said they wanted music,
we want the words to make music.”

At last, on March 31, 1983 her publisher brought the first printed edition of Possum Magic to Fox’s home.

“That’s how long ago it was, nobody would do that these days,” she laughs. “They handed this book over as if it was a baby. The 31st of March 1983, man, that’s when the rest of my life began.”

Possum Magic quickly became an Australian classic. Since then, Fox has written more than 40 children’s books including Where is the Green Sheep? which has recently overtaken Possum Magic in annual sales. Australia’s official gift to Prince George upon his birth in 2013 was a copy of Fox’s Ten Little Fingers and Ten Little Toes.

Since early 2017, Fox has made the news for more political reasons. She was wrongly detained at LA airport by Customs and Border Protection agents in the wake of Donald Trump’s controversial travel ban which targeted people from five Muslim majority countries. She told the world’s media afterwards that her treatment while she was detained was humiliating and insulting and left her traumatised. Fox later received an apology, but not before the experience turned her into a revolutionary.

Her most recent book I’m Australian Too was published just weeks later and is about welcoming migrants and refugees to Australia. Fox has not held back in the intervening 18 months when talking about political attitudes to those coming to Australia.

“I’ll come out straight away and say that I’m a Labor voter because I have to say that in order to explain my book,” Fox says. “Both Labor and Liberals have been disgusting about asylum seekers. Disgusting. I was so devastated – and still am – by our treatment of people that are human beings. People forget that they’re human beings. “I was lying in bed just enraged, absolutely enraged, by a series of ministers for immigration – and also shadow ministers for immigration, in both parties – I’m hacking them both to death over this. And I thought, what is it about Australians that we are so weird? In every generation it seems, there’s a new whipping boy. At the moment, it’s the Sudanese kids in Melbourne. In 10 years’ time it will be someone else. We tend to just beat up, psychologically, and also sometimes physically, the new people who come to Australia.

“I thought, come on guys, get real. We’re all together, this is a fabulous country. None of us was born here except the Aboriginal people and even they came here hundreds of thousands of years ago. But for us to claim that we are the true Australians is just so much nonsense. There’s no such thing as a true Aussie.”

I’m Australian Too celebrates Australia’s multiculturalism, with children from all different ethnicities explaining their unique Australian story. The last child in the book is “not Australian yet” and resides in a detention centre. While it’s not a book with an overt message (“Message books are ghastly!”), it does make any reader think about what it means to be Australian and how we treat migrants. Fox has said the book contains a “scream on behalf of refugees and a longing for a kinder Australia.”

She says if there is one characteristic that draws together Australians, it is their warmth.

“I’ve travelled a lot and the warmth of the people in this country is incredible,” she says. 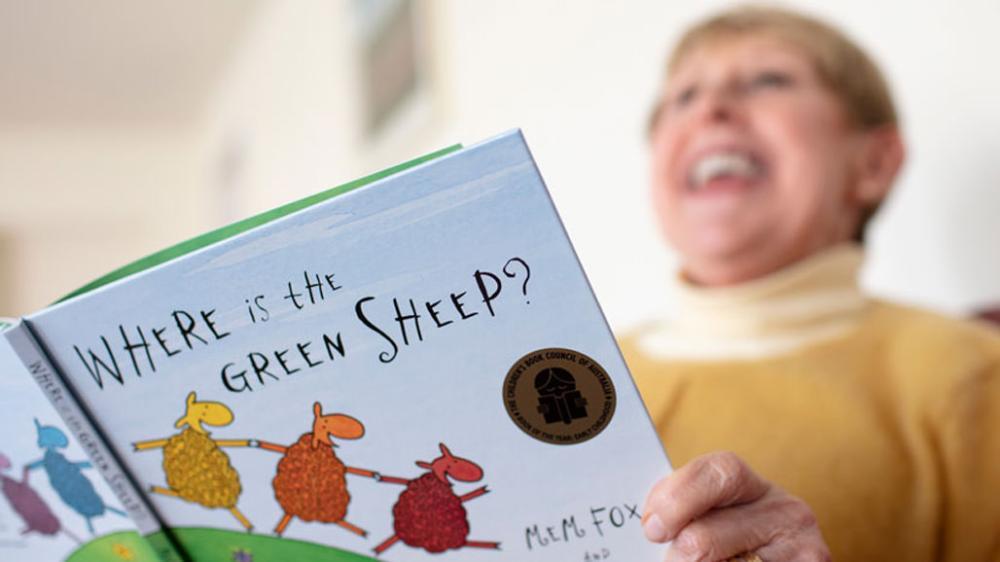 Despite her being regarded as an Australian icon, Fox’s childhood was spent in Zimbabwe. She was born in Melbourne in 1946 to missionary parents, but her family moved to Zimbabwe – then known as Rhodesia – when she was just six months old. Her father was the director of teacher training at the Hope Fountain Mission, just outside the city of Bulawayo. She lived there for 19 years.

When her education began at the mission school, she was the only white student. However when the authorities discovered her there, she was sent to an all-white school to complete her education. In high school, Fox’s mother encouraged her to try public speaking and she found she really enjoyed acting. Her blog says: “I think I was acting and putting on a show from the time I could walk. I did a lot of acting in my school years. In the mid-sixties, totally unsophisticated, I went to drama school in London and spent three happy years changing
my Rhodesian accent, speaking Shakespeare, singing Beatles’ songs, wearing miniskirts, and dyeing my hair – a habit I haven’t grown out of.”

It was at drama school that she met Malcolm Fox and fell in love. The pair married in 1969 and have been together ever since. In 1970 they moved to Adelaide to be near Fox’s beloved grandfather Wilfrid Partridge who later inspired the title of her book Wilfrid Gordon
McDonald Partridge. The couple planned to stay in Adelaide two years. Almost 50 years later, they’re still there.

Fox gave birth to the couple’s daughter Chloe in 1971. The child amazed her parents by learning to read at just four-and-a-half years old, within two weeks of starting school. An astounded Fox went to Chloe’s school, anxious to know how the teacher had achieved this incredible result so quickly. The teacher did not share Fox’s level of enthusiasm and her response was almost offhanded.

“She said, ‘Well, did you read to her?’ And I just thought that was the weirdest question,” says Fox. “I said of course we read to her. And she literally turned away and said, ‘There you go then’.”

That encounter sparked the next phase of Fox’s career. At the time she was teaching drama at a teachers college, but she soon retrained to teach children’s literacy. Since then, Fox has become one of the most significant figures on the international literacy scene. She was an Associate Professor in Literacy Studies at Flinders University for 24 years before retiring in 1996. As a global literacy consultant, she speaks to audiences all over the world about how children learn to read and encouraging people to read aloud to children to engage them in books from the earliest age.

Among the five non-fiction books Fox has written for adults, is Reading Magic: how your child can learn to read before school and other read aloud miracles. It is a book Fox says she is most proud of. The book gives parents simple ideas on how they can help build their child’s literacy skills in the preschool years. But don’t be mistaken: this book is absolutely not about trying to teach your child to read before they start their formal education.

“I thought all you’ve got to do is read to your kids and read to them regularly and read to them with life in your voice,” Fox says. “I said [in the book] please don’t teach your kids to read. Because teaching [them to read] before they go to school is revolting, it’s wrong, it’s [supposed to be] a loving relationship.”

Despite the accolades that writing has brought her, it is Fox’s teaching career that she is most passionate about. She prefers the human interaction of the classroom over the solitary nature of writing.

“It’s the laughter. It’s starting a class and seeing the change in the people between the start of the class and the end of the class and seeing what they’ve picked up and the way that they’ve picked it up,” she says. “With writing, you sit there, there’s no laughter, there’s no gossip, there’s no human interaction. You can hardly tell what you’ve succeeded in doing during the day. You might’ve changed one or two words and it might’ve taken you ages. Your thesaurus might have been looked at until it was falling apart, you’re trying to catch words from the air, you’re lonely, there’s no one to talk to. Your bottom is sore from sitting, your wrist is sore from typing. There’s no comparison.”

In 1996, Mem Fox received her first honorary doctorate, from the University of Wollongong, for her services to children’s literacy. She had enrolled at UOW in 1986 having long sought a postgraduate course in literacy and language with sufficient depth and rigour. She studied by distance with a group of South Australian students. Unfortunately, due to the demands of her successful writing and speaking career, she was unable to finish the degree. However she speaks with great affection of the network she built at UOW.

“For them to consider me worthy of an honorary doctorate, from an institution which in itself was well known and highly regarded as the best in the teaching of literacy as far as I’m concerned. To have it awarded by that institution, and by the people organising it, I felt like swooning when I found out about it. I was really, really excited,” says Fox.

Fox has been recognised by many institutions over the years for her services to literature and Australian culture including an Order of Australia (AM) medal in 1993; The Australian Prime Minister’s Centenary Medal in 2003; Australian of the Year finalist 2004; honorary Doctorates of Letters from Flinders University in 2004 and the University of Technology, Sydney in 2011; and she was appointed as a Hans Christian Andersen ambassador by Crown Prince Frederik of Denmark in 2005. When asked about her greatest career achievement, Fox nominates her longevity.

“That I am still, after 35 years, able to write books that children like. It makes me so happy because if children like books, they want to read them over and over again. If they read them over and over again they will find learning to read easy. So the combination of those two things in my life have just been magical. I’m very proud of keeping kids and parents happy.”