Lu has worked for major news outlets in Paris, Belfast, London and Sydney.

Angelique Lu has had a flying start to her early journalism career. While journalism graduates are desperately looking for any work in a landscape littered with declining profits, job losses and budget cutbacks, Lu has worked for major news outlets in Paris, Belfast, London and Sydney.

“It’s been a really hard slog,” she says. “There was a lot of homesickness, and quite a bit of self-doubt, especially when I wasn’t sure how things might pan out when I moved abroad. But I think a big part of any career is learning to ride out the rocky parts and celebrating the little victories when they come. I’ve been seriously lucky in my career so far.”

Her advice to others is to embrace rejection and failure.

“Don’t take rejection personally,” she says. “I think rejection and failure are such healthy aspects of a career. I think if you’re not getting rejected, you’re not putting yourself out there. If you’re not failing it means you’re not trying new things.”

And Lu has certainly put herself out there to try new things. While studying a Bachelor of Journalism - Bachelor of Laws in 2015 she was one of ten UOW students to fly to Paris to undertake an internship at the World Association of Newspapers and News Publishers with award-winning journalist and UOW academic Julie Posetti.

Lu was there to work on the organisation’s blog for a three-month stint writing about issues which affected journalists worldwide. While she was there, the Charlie Hebdo terrorist attack occurred, leaving 12 people dead and another 11 injured. 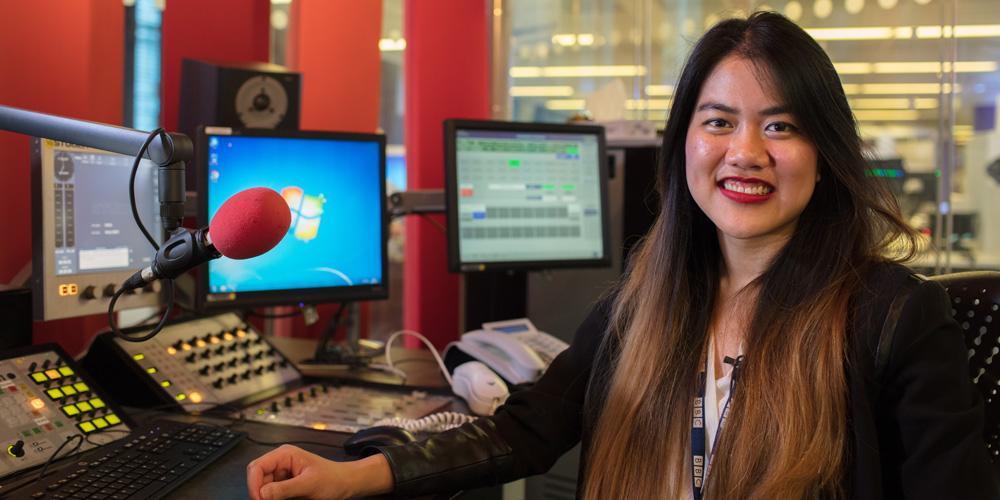 “You’re just sitting behind a microphone but I [had] to keep reminding myself that I could be talking on the radio and someone is doing the dishes or driving their car.”

“To be in Paris, when there [was a terrorist attack] against journalists, was really quite a formative experience for me,” Lu says.

In the end, Lu spent nine months working in Paris when she was offered a chance to work on a UNESCO study into legislation in 120 countries which protects journalists’ sources.

“It was just me being open to opportunities, being really eager,” she says. “It combined my two loves, which are law and journalism.” 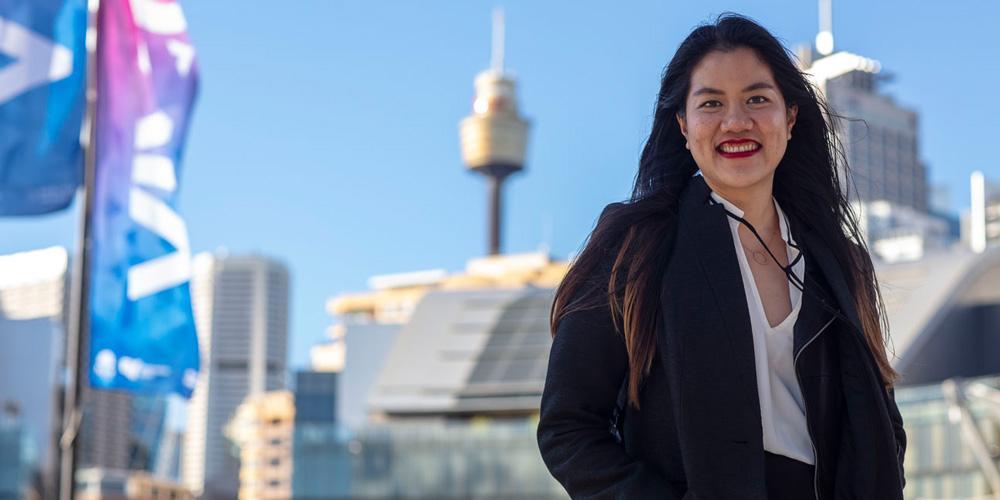 Angelique Lu is back home in Sydney, working for ABC News.

The report, Protecting Journalism Sources in the Digital Age, was published in 2017 and received international attention, including being shared by Edward Snowden who rose to infamy in 2013 when he released thousands of classified US National Security Association documents to journalists.

The report found laws designed to protect journalists and their sources globally were not keeping pace with new methods of data collection and the “spill-over” effects of anti-terrorism laws. This in turn threatened journalists’ ability to report without fear.

After her internship ended, Lu looked to the UK for her next role. She was one of about 4000 applicants for just 14 traineeships at the BBC, one of the world’s largest news organisations. Lu was successful and posted to Belfast to begin the traineeship program.

“It was really great because Belfast has this complex history,” Lu says. “It is the ultimate test of journalism skills in terms of audience awareness, the history and the post-conflict [stage] it is in.”

After finishing her traineeship, Lu moved to London to work on BBC’s World Service, the world’s largest international radio broadcaster with millions of listeners worldwide. 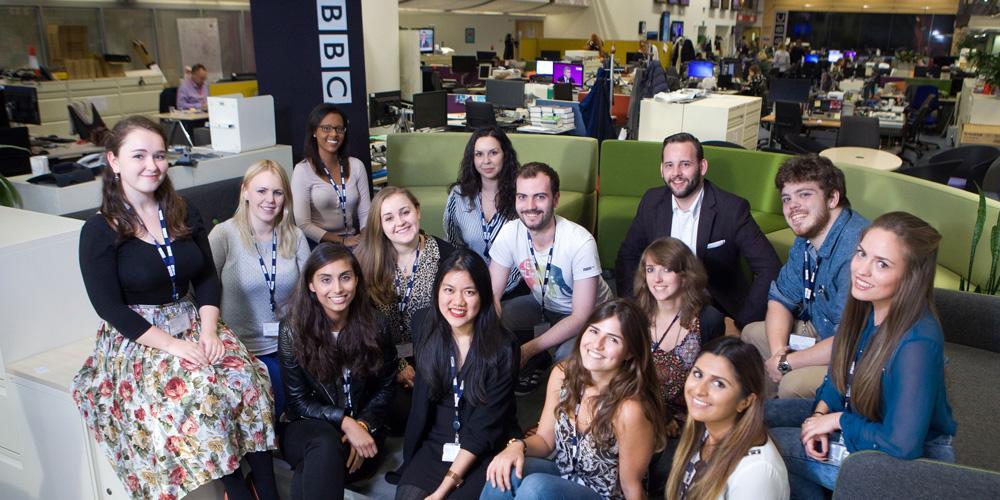 Lu with the other BBC trainees. Image courtesy of BBC Academy.

“Sometimes it [dawned] on me, just the scale and the magnitude of working at the BBC in London. It’s the largest newsroom in Europe,” Lu says. “You’re just sitting behind a microphone but I [had] to keep reminding myself that I could be talking on the radio and someone is doing the dishes or they’re driving their car and you’re just a familiar voice.”

After two years in the UK, Lu returned home to Sydney in late 2017 and started working in radio again, this time at the ABC. Her first role was as a producer for Nightlife, a national program. Now she’s out of the studio and working the general news rounds as a reporter in the NSW newsroom and loving the constant deadlines and adrenaline rush.

“I love the fact-finding, being allocated something that doesn’t look like much, and it turns into something real and tangible,” she says. 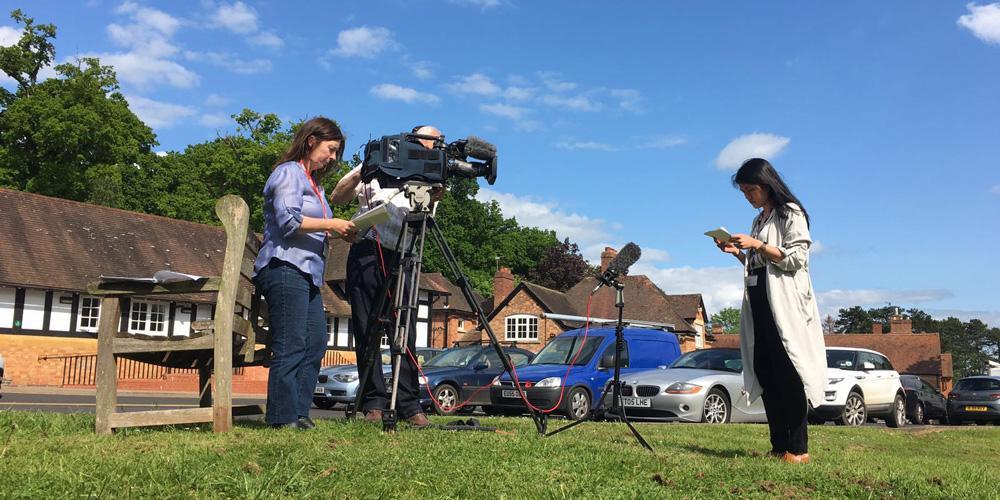 Lu has also been admitted as a solicitor with the Law Society of NSW after completing the bar requirements while she was working in the UK.

“It's no question that I'm a better journalist because of the critical thinking my legal qualifications have given me,” she says. “I'm not sure where my career will take me: whether I'll continue to work in journalism​, or whether I'll go down a legal path, something in between or something totally different altogether. I think there's only so much of life you can plan. I think it's a matter of being adaptable and being ready for whatever comes next.”

Lu says it was her mother who taught her that there was no such thing as a wasted experience. Her parents and brothers came to Australia in 1983 as refugees of the Vietnam War.

“That’s such a formative part of my identity and my drive,” she says. “To see people like my parents, how much they had to fight for things, even basic things. So for me, who has [fewer] obstacles in my way, I feel like I’m capable of doing a lot more because I know what the alternative is.

“Sometime I get really well-meaning people say: `You’ve done really well despite being the daughter of refugees.’ I understand what people mean by that, because there are real barriers to overcome and I’ve needed a lot of support along the way.

“But I also think it’s because I’m the daughter of refugees that I’ve done well, because I had their experiences to draw from and ... the opportunities available to me are so much greater than they had.”