It's more than you think

In 2014-2015, a staggering 63.4 per cent of Australian adults were overweight or obese – well over half of our nation. But believe it or not, Australia – one of the world’s richest countries – has a food security problem.

When we think of food security, it’s generally more in terms of how to ensure there will be enough to feed the world’s ever-increasing population; with that figure expected to reach 10 billion by 2050, it certainly is a pressing problem.

However, food security in the world’s most affluent nations is also part of the picture according to Holley Jones, National Senior Project Officer, Service Development for Australian Red Cross.

After graduating from the University of Wollongong in 2007 with a bachelors degree in nutrition and dietetics, Jones has been passionately involved with the issues surrounding food security in Australia. She has been working to address food insecurity at local, state and national levels with a special emphasis on the needs of Aboriginal and Torres Strait Islander peoples, older Australians, newly arrived migrants and other vulnerable groups.

Jones has been involved in food security in Australia through a number of avenues, from working on a school breakfast program that now provides morning nutrition to around 170 schools around the country, to helping establish a food skills program that worked with people to maximise their food dollars giving them much needed skills in budgeting and cooking.

“Food security is not just about having enough to eat; increasingly it is about access to quality food. For people with a limited income it doesn’t mean they are starving – but they often do not have regular access to fresh, nutritious food,” says Jones.

“This access to nutritious food is now a big problem, so much so that the United Nations has declared a decade of action on nutrition – both over-nutrition and under-nutrition.”

According to the Red Cross, food insecurity, much like homelessness, is a symptom of poverty and social exclusion. Australians who are food insecure can be at risk of being overweight, experiencing nutrient inadequacies, mental health problems and stress as well as having higher levels of risk factors for cardiovascular diseases and diabetes. Older people who experience food insecurity have lower self-reported wellbeing.

“There are three levels of food security,” says Jones.

“The first is availability which requires sufficient, culturally appropriate nutritious food to be available to all communities and individuals. The second is access, which includes the aspect of affordability. Access to a healthy, nutritious diet comes through a combination of adequate food production, transportation, distribution and the balance of food cost and household income.

“The third level is utilisation, which is about what people are able to do with that food in terms of adequate storage with things like refrigeration, preparation and cooking skills, including basics like clean water – especially in areas where housing is unstable.”

Although there is an abundance of food in Australia, Jones says statistics show that five per cent of our population does not know from where their next meal will come from.

“There is increasing evidence of people in the mortgage belt group not having food security. For example, parents will sacrifice their own meals to be able to feed their children,” she says.

One of the biggest influences of what people eat, says Jones, is determined by their environment – what they see advertised which is strongly influenced by global corporations.

“In Australia, one-third of the energy we consume comes from junk food and less than ten per cent of Australians eat the recommended amount of fruit and vegetables,” she says.

“It’s different in developing countries where there is currently a nutrition transition,” says Jones.

“Countries that are developing quickly and are coming from places of low health and under-nutrition are being flooded with highly processed foods which is quickly resulting in a crisis of over-nutrition – and those countries have not got health systems in place to deal with the diseases that result from this, such as diabetes and obesity.”

For Asher Taccori, food security has quickly become a passion that has shaped his final years of study at UOW. The Bachelor of Nutrition and Dietetics student has had the fortune of interning with the United Nations World Food Programme in Thailand and has studied nutrition science and food security internationally in the USA and Fiji as part of a study abroad program. Using his acquired knowledge, he has already implemented programs and started projects in some of the world’s poorest countries in order to provide food security to those most in need. 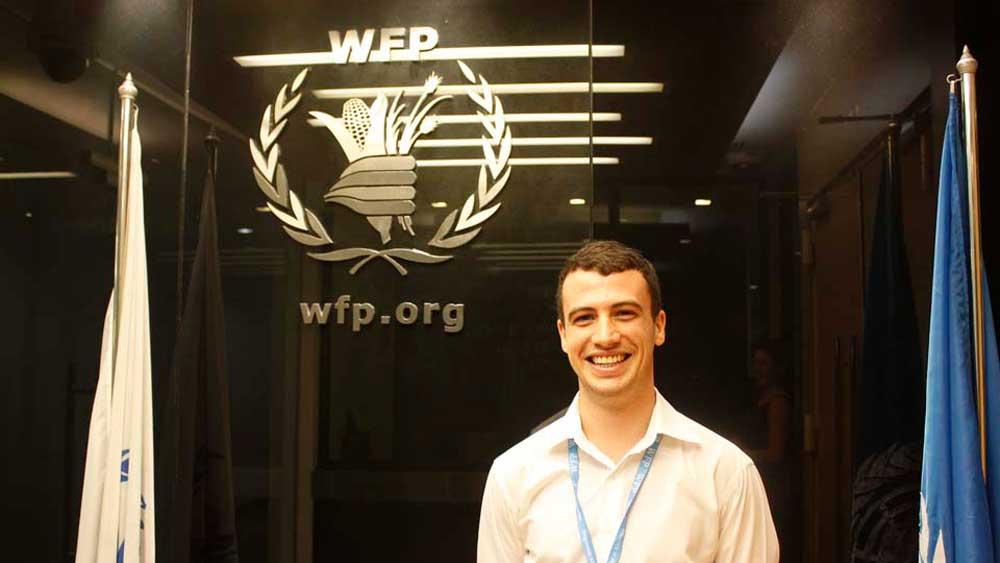 And after representing UOW at the 7th University Scholars Leadership Symposium in Hanoi in August, Taccori is even more determined to create a world in which food security is no longer a crisis to be overcome.

“The symposium highlighted how food security is inter-related to all other global humanitarian issues from the refugee crisis to human trafficking, terrorism and, of course, poverty,” Taccori says.

Taccori went straight to Hanoi from Cambodia, where he was team leader on a social entrepreneurial-centered agriculture endeavour called Project Everest. Here, he worked in collaboration with local NGO’s and Build Bright University – a local Cambodian university – to teach the country’s younger generations the health and economic benefits of efficient farming techniques combined with nutritional education.

After the genocide of the 1970s, many of the people who taught farming techniques to the younger generation had been killed, and the country was struggling to produce food using very traditional farming methods,” Taccori says.

“They were living day-to-day and were afraid of trying new things so their yields from the land were very low. Two-thirds of Cambodia’s population is reliant on the agricultural sector so at Project Everest we wanted to see if we could empower the people by teaching them new, more modern farming techniques by partnering with NGOs and the University to provide practical courses the University could include in its curriculum.

“It will allow students to be taught by their own people on their own plots of land rather than have foreigners coming in to tell them what to do. The next step is then to package that information up with a business plan for other universities in developing countries to adopt, which also makes the project financially sustainable as well.”

That access to culturally appropriate food is vital to maintaining food security to the poorest nations in the world, says Taccori, who saw first-hand the devastation that relying on highly processed food can bring for Indigenous populations unused to this high-energy but nutrient-poor diet.

During an internship with the Australian National Centre for Ocean Resources and Security (ANCORS) last year, Taccori was involved in conducting a food security survey in Betio, the most densely populated area of Kiribati, a small chain of islands and one of the least developed countries in the Pacific.

“There had never been a household food security survey done in that region before, and it is one of the regions in the world which is now being affected dramatically by climate change and rising sea levels,” he says.

“The islands are made completely of coral so limited food can be produced, and the major issues facing the population were over what food was available. Traditionally, the islanders relied on fish and plant-based foods such as breadfruit and coconuts. In my survey, it was rare to find households that had eaten any fruit or vegetables. They do not have access to buy food, so can’t buy frozen fruit or vegetables, but they are surprisingly one of the most obese nations in the world.” 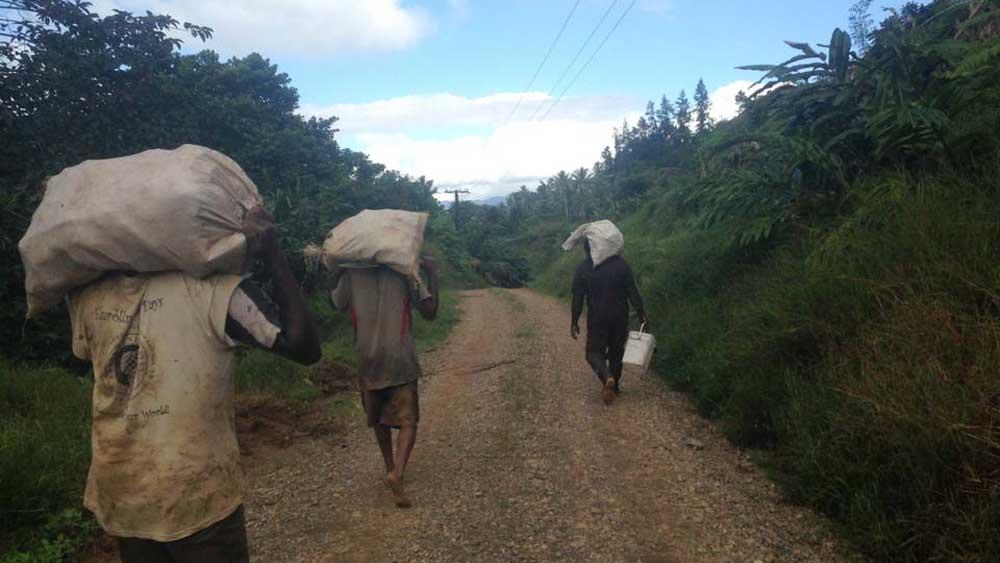 Taccori says the population is now becoming increasingly dependent on packet noodles and bags of rice, and this non-traditional diet is impacting negatively on the obesity rates. This gives rise to what is known as the double burden of disease: over-nutrition and, ironically, under-nutrition – two diseases that did not exist together previously.

It was in India that Taccori says he first saw the impact that food insecurity can have on communities.

“I always wanted to use my degree to be able to help people and thought that health is wealth. I went to India in 2014 and it opened my eyes to poverty and food insecurity,” he says.

“There are approximately 800 million people in the world that don’t get enough to eat and once you learn that you can’t unlearn it."

In conjunction with five other students, and with advice from UOW public health and food security lecturers Dr Joanna Russell and Dr Karen Charlton, Taccori conducted a Household Food Insecurity Access Survey in one of India’s poorest regions.

It was through the results of that survey that Taccori and his collaborators began developing the pilot solution. Over the course of 18 months, the project developed into what is now called the Baby Box which provides new mothers in developing countries with resources to ensure the best chance at food security for the first years of their children's lives.

“The first 1000 days of a child’s life are the most important and the Baby Box, is designed as an educational tool which includes resources to give children the best start to life,” he says.

“It contains a mosquito net, a manual on what children should eat, breastfeeding techniques, introduction to solids based on local diets, as well as iron tablets, as we found that iron was a key nutrient that was lacking in these poorer communities.”

The Baby Box is seeing success and is now being prepared for roll out in other communities around India.

“Every country is so unique in regards to its food security,” says Taccori.

“When you look at food security you also have to consider the social context of a country, and take a systems approach to the problem, because if you change one aspect of a community there will be a ripple effect that will affect all other aspects.”