A variety of achievements in the fields of community engagement, research, global impact, and student experience

Strengthening our ties with the community. Investing in research that will have a global impact while helping society on a local level. Providing current and past students with an experience that is enriching, inspiring, and unforgettable.

For the University of Wollongong (UOW), the past 12 months have seen a variety of achievements in the fields of community engagement, research, global impact, and student experience. 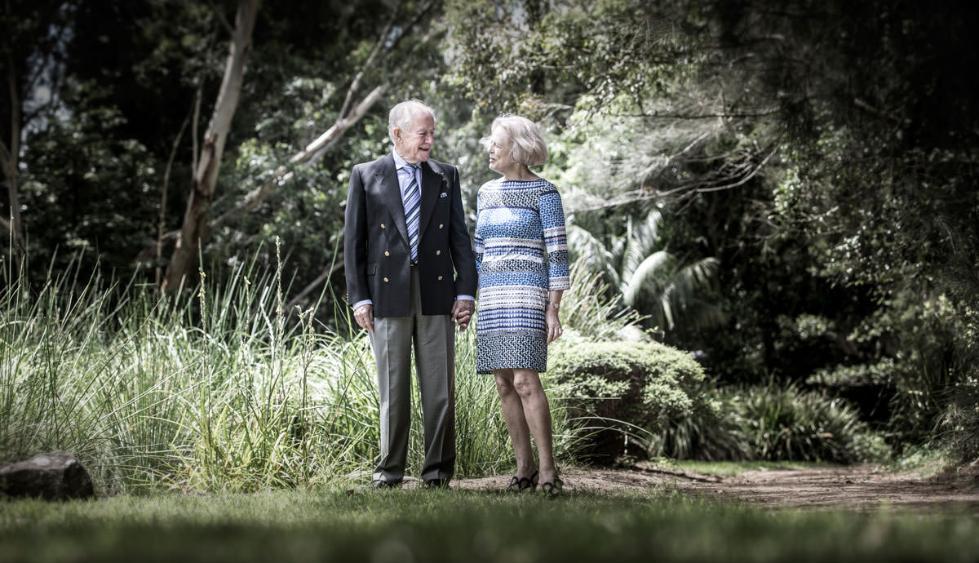 The ties between UOW’s past and future were cemented with the news in February that former Vice-Chancellor Emeritus Professor Ken McKinnon and his wife Suzanne Walker gifted more than $1 million to UOW, an extraordinary gesture that will foster innovation for years to come. The $1.3 million personal gift, which established the McKinnon Walker Trust, will enable the University to move into the future by creating an environment that fosters innovation and new ideas.

UOW’s commitment to students and the community was on display the following month with the opening of state-of-the-art nursing teaching facilities at UOW Bega. The $1.5 million Nursing Clinical Learning Facility, which includes a three-bed hospital ward for practical teaching, will educate the next generation of nurses to provide exceptional care and much-needed health services in regional areas.

March also saw the launch of UOW’s 2016-2020 Strategic Plan, with the aim of positioning the institution as a global leader in research and learning. Centred on six goals, the Strategic Plan responds to the social, environmental, and economic challenges facing universities in Australia and around the world by, at its core, reaffirming UOW’s commitment to outstanding research and teaching; enhancing student experience; strengthening global standing and partnerships; and making a positive contribution to society.

In May, it was announced that UOW would establish a new campus in Liverpool, demonstrating the University’s ongoing commitment to provide world-class education to students who prefer to study closer to home. NSW Premier Mike Baird and UOW Vice-Chancellor Professor Paul Wellings were among those who unveiled the establishment of the South Western Sydney Campus, opening in 2017, which will help to meet the needs of residents in the thriving metropolis.

This year, rugby league fans rejoiced when UOW and the St George Illawarra Dragons extended their long-standing partnership to the end of 2017. After UOW and the Dragons signed a Memorandum of Understanding (MOU) in May, the university was granted naming rights to Jubilee Oval, Kogarah, which will henceforth be known as UOW Jubilee Oval. It builds on a strong and lasting relationship between UOW and Dragons, which formally began in 2009, and includes scholarships, community programs, research, and promotions.

August saw the release of the 2016-2036 Campus Master Plan, which will guide the direction and planning of UOW over the next 20 years. Consultation with students, staff, local business, government and the wider community was at the core of the planning process with the Campus Master Plan including strategies to increase enrolment numbers and upgrade campus facilities to dealing with increasing infrastructure demands. 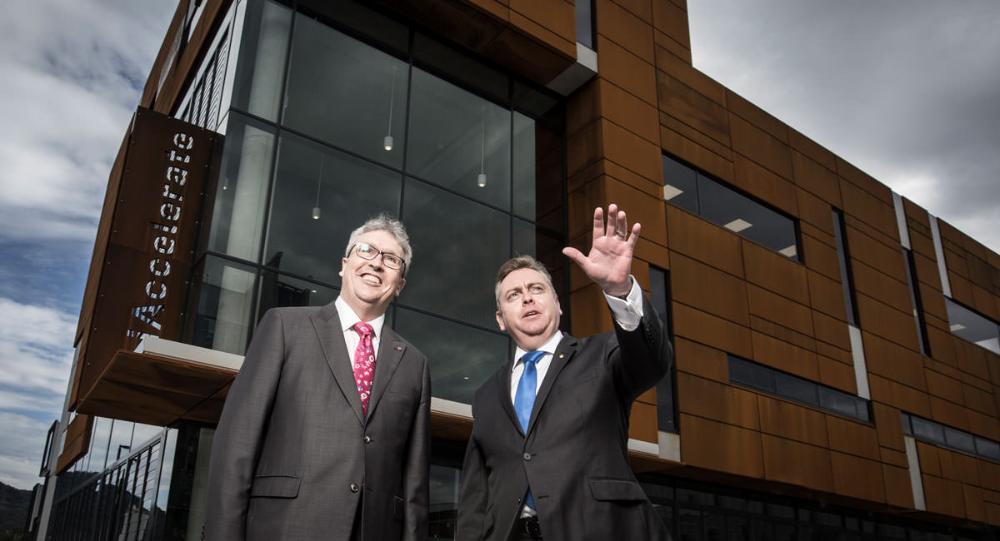 The year began with the announcement that UOW was among the top 100 most international universities in the world. With UOW coming in at 71 on the United Kingdom’s Times Higher Education list, the ranking demonstrates UOW’s world-class research and exceptional teaching quality on a global stage.

UOW’s international links were strengthened in early March as the University Global Partnership Network (UGPN) gathered in Wollongong for its annual meeting. As one of four universities involved in the network – alongside University of Surrey, North Carolina State University, and Universidad de Sao Paulo – UOW hosted attendees from around the world, who spent three days hearing about each other’s research and exploring opportunities for global partnerships.

The same month, UOW cemented its place as one of the top young universities in the world after it placed 37th on the Times Higher Education 150 Under 50 rankings. It is the fifth year in a row that UOW has made the list, which focuses on a new generation of global universities that demonstrate exceptional promise and have made great inroads in research and teaching in a matter of years, rather than centuries.

The opening of the $18.5 million iAccelerate Centre on UOW’s Innovation Campus in July heralded a new era of innovation for the Illawarra. The building, which pays homage to the Illawarra’s steel export heritage, is home to infrastructure, mentoring, and education programs, with the aim of bringing innovative ideas to market and helping start-ups to flourish in a supportive environment.

In September, UOW’s ties with Hong Kong were further cemented with the Community College of City University receiving a land grant from the Hong Kong Government to establish a new flagship campus in the Tai Wai Railway Station development. The grant will advance UOW’s vision of bringing its outstanding university experience to Hong Kong’s leading non-profit college.

The release of the annual QS World University Rankings in September saw UOW jump 25 places to land at 218th on the list. By moving up the rankings, from 243rd in 2015, UOW was named in Australia’s top 10 universities. UOW made improvements in several key performance indicators, including academic reputation, faculty to student ratio and overall performance.

UOW’s Innovation Campus, celebrating its 10th year, received the Emerging Research Park Award at the Association of University Research Parks 2016 Awards for Excellence, held in Oklahoma, US. It was recognised with the global award for its efforts to drive social and economic improvement in the Illawarra through research, industry and education. 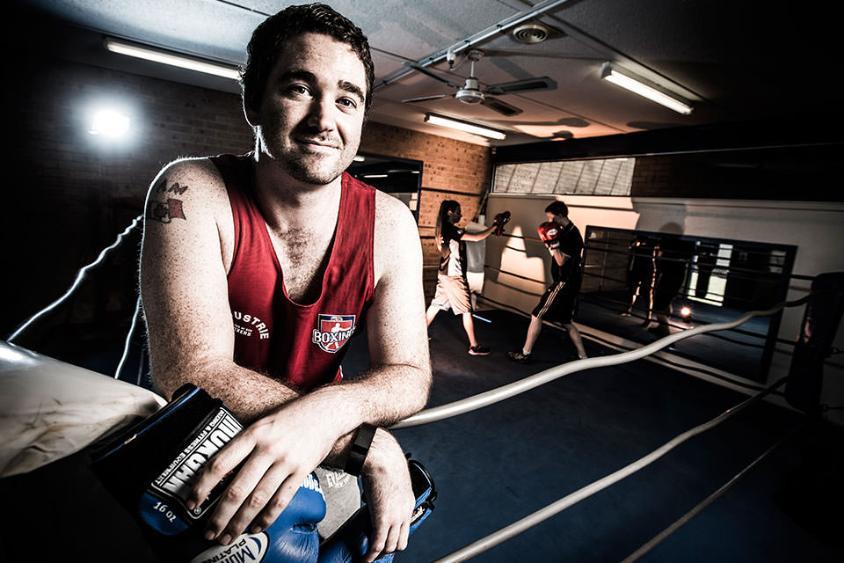 The year began on an overwhelmingly positive note with close to 6,000 offers for undergraduate students to attend UOW, an increase of 1,200 spots on the year before. UOW was clearly the study destination of choice, particularly among students from NSW and the ACT, with degrees in Nursing, Commerce, Arts, Business, Engineering, Science, and Communication and Media Studies the most in-demand.

The new Bachelor of Pre-Medicine, Science and Health, which launched in 2016, proved particularly popular among female students, who comprised two thirds of enrolment figures. The three-year degree aims to prepare students for future study in medicine, dentistry, podiatry, or veterinary science. With so many young females among the contingent of aspiring doctors, course coordinator Associate Professor Danielle Skropeta said it was a great result for gender balance in science-related subjects.

From one end of a degree to the other, a final year medicine student this year launched an innovative free fitness program for local high school students with the aim of improving their confidence and boosting their mental health. International student Kevin Rourke, who hails from Canada, launched the program in February at Shoalhaven PCYC, offering boxing-style classes to students from Bomaderry High and Nowra High.

At the autumn graduation celebrations held in April, UOW student Jessica Sparks was honoured with the annual Chancellor Robert Hope Memorial Prize. Jessica, a double lung transplant recipient turned organ donation advocate, graduated with a double degree in Law and Journalism, and was recognised with UOW’s most prestigious award for her outstanding contribution to her studies and the community. 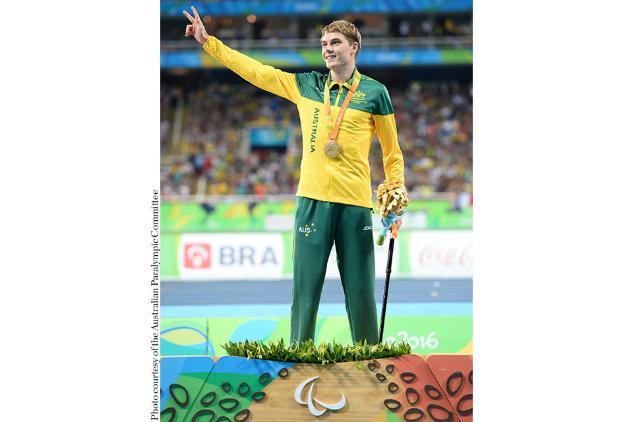 UOW was represented in Rio de Janeiro when Engineering student James Turner took gold at the 2016 Paralympics. The 20-year-old was a member of the Australian athletics team and set a world record with his win in the men’s 800m (T36) event. Nutrition Science student Jessica Thornton also competed for Australia at the 2016 Olympics. Jessica, just 18 years old, was the youngest member of the Australian Athletics team when she took her place in the 4x400m relay. Medical and Radiation Physics student Wesley Roberts also made the journey to Brazil, where he represented the Cook Islands in 1500m freestyle.

Alumnus Tristan Knowles was a member of the wheelchair basketball team at the 2016 Paralympics in Rio de Janeiro.

PhD candidate Ika Lestari Damayanti, from the School of Education, was profiled in an ABC iView series, International Student Stories. The series focused on the contribution of international students to Australian universities. Ika, who was also named the People’s Choice Winner at the 2016 Asia-Pacific Three Minute Thesis final, was acknowledged for her work building English literacy among Indonesian school children and creating ties with the local Indonesian community.

UOW researchers were placed in the spotlight when the US Department of Defense awarded US$500,000 in funding to Dr Justin Yerbury and Dr Kara Perrow, of the Illawarra Health and Medical Research Institute to develop a new treatment strategy for Motor Neurone Disease (MND).

Dr Yerbury and Dr Perrow, who won the Department of Defense’s Therapeutic Idea Award, will develop a targeted drug delivery system to deliver one of the fundamental components of the system to motor neurons in the brain.

In April, UOW’s strong capacity in the field of drug and alcohol research was placed in the spotlight when Professor Lynne Magor-Blatch, from the School of Psychology, was invited to attend the United Nations General Assembly Special Sitting in New York.

UOW’s groundbreaking work on Homo floresiensis, the tiny species of human affectionately dubbed the ‘hobbit' which was uncovered by UOW researchers in 2003, was again placed in the international spotlight this year through two remarkable discoveries. A team of researchers, working on the Indonesian island of Flores, uncovered the fossilised remains, including a lower right jaw fragment and the teeth of at least one adult and two children, of ancient hominins, which appear to be the ancestors of the ‘hobbit’.

Just weeks later, in June, it was announced that crucial new evidence had revealed the time gap between modern humans and the last ‘hobbits’ was much narrower than previously thought after it was discovered that the former used fire at Liang Bua, on the island of Flores, 41,000 years ago.

In August, Professor Allan Nutman, from the School of Earth and Environmental Sciences, was among a cohort of academics who discovered the existence of the world’s oldest stromatolite fossils in Greenland, dated at 3.7 billion years old. The findings, published in Nature, point the rapid development of life on Earth in the planet’s early years and predated the world’s previous oldest fossils by 220 million years.

The following month, it was announced that UOW would lead a new ARC Centre for Excellence for Australian Biodiversity and Heritage, the first national research institute of its kind in Australia. The UOW-based multidisciplinary centre will bring together academics from around the world on a seven-year, $45.7 million research quest to investigate the beginnings of Australia’s unique biodiversity and Indigenous heritage.

September also saw the announcement that UOW would deliver a new national training centre aimed at developing and enhancing the skills of the workforce in caring for people with dementia. Led by Professor Richard Fleming, the $27.9 million initiative will improve support for people with dementia and their carers, which will prove essential as Australia’s population continues to age.

UOW ended the year with a celebration of the women who, through their own achievements and their contribution to the UOW community, are making a difference through research. UOW Women of Impact recognised 41 female researchers from across the University’s five faculties who are contributing new knowledge, innovative techniques and ideas, and helping train the next generation of graduates.

UOW Women of Impact is inspired by the Science in Australia Gender Equity (SAGE) pilot and is part of the UOW Impact series, which began last year with the launch of 40 Years of Research Impact.