How graduate nurse achieved her dreams

Loureene Kelly on her ‘life-changing’ path to university

During one of the worst experiences of her life, Loureene Kelly had something akin to an epiphany.

Her father had been diagnosed with cancer and was in palliative care at Pambula Hospital on the Far South Coast.

Loureene had moved home, from Sydney to Eden, a coastal town on the Sapphire Coast, to look after her father. Day after day, Loureene and her sister kept vigil by his bedside, and it was there that she realised the path that she wanted the rest of her life to take.

“I’ve wanted to work in healthcare since I was four years old,” Loureene says. “I used to be obsessed with this medical journal that we had on the bookshelf at home. But my life took me in a different direction.

“When my father got cancer and was given a short amount of time to live, I came home to help care for him. When he was in the hospital, at the end-of-life stage, my sister and I stayed with him round the clock.

"What really stood out to me during this time was watching the nurses work."

"It’s not just the way they treated my Dad, although that was exceptional, but the way they made one of the worst experiences of my life so much better.

“My Dad didn’t want to die in hospital; he wanted to die at home. The doctors didn’t want that, but the nurses advocated so strongly for my Dad. He was able to go home. The fact that he felt heard, and his wishes respected, meant the world to him, and to us.” 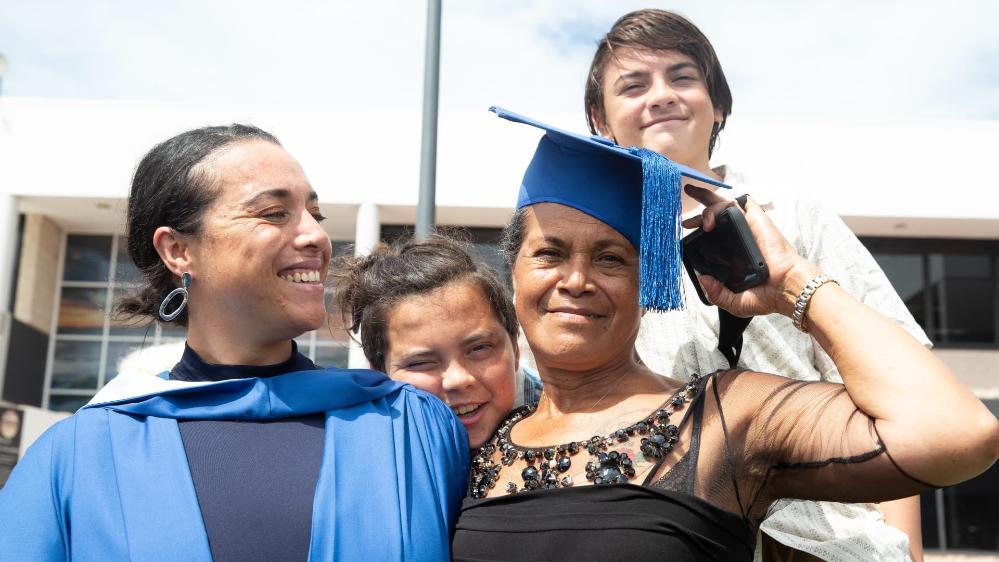 Loureene Kelly with her mother and two boys, on her graduation day from UOW Bega in February 2022. Photo: Paul Jones

It was the first step for Loureene on the path to achieving her dream of becoming a nurse. The experience crystallised her future and made her realise that life is too short to not chase your dreams.

“What the nurses gave my Dad and my family, I’ll never forget it. I want to be able to give that to other people and be there for them in those moments. Losing my Dad, I really reflected on what I wanted to do with my life."

Loureene had never felt that university was an option, but in the months following her father’s death, she began to take the tentative steps towards studying nursing. Those steps led to the University of Wollongong’s Bega Campus, where Loureene celebrated her graduation with a Bachelor of Nursing. She was one of the recipients of the Robert Hope Memorial Prize, UOW’s most prestigious honour for students and celebrates the life and contribution of the University’s founding Chancellor, Robert Hope

Loureene also delivered the vote of thanks on behalf of the student body. During her speech, she mentioned the immense role the regional campus had played in helping her to achieve her dreams.

“University was never something I had imagined,” Loureene reflects. “I’m the first in my family to attend university. I am a young woman of colour. I was very much the minority in the community when I was growing up. University wasn’t something I saw, it wasn’t normalised for me.”

Loureene went along to an information night at UOW Bega, which she describes as “very exciting, but still scary”.

With the help of the team at UOW Bega, led by Campus Manager Sam Avitaia, Loureene began a nursing pathways course at South Coast Colleges, before transferring directly into the Bachelor of Nursing. It had been many years since Loureene had studied, but the support and help that she found at the Bega Campus was invaluable and made all the difference. 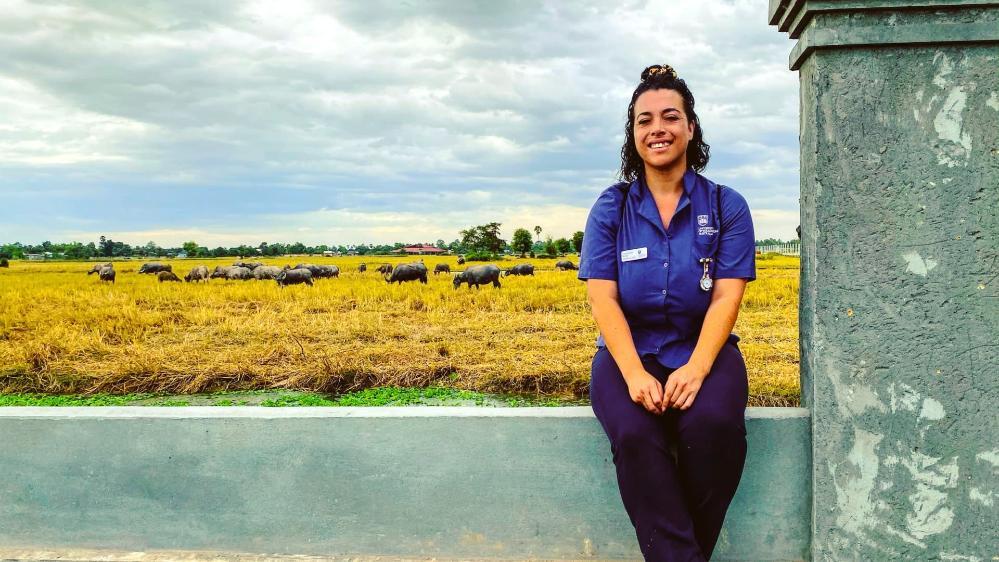 At the same time, Loureene landed a job working in an aged care home. She wanted to make sure that nursing was what she really wanted to do.

“The staff at Bega welcomed us with open arms, no matter who we were or our background. I spent my whole degree with imposter syndrome,“ Loureene says. “But at some point, I decided to stop being Miss Independent and to ask for help when I needed it.

“I used every support service that was available. I saw the Bega Campus counsellor when I was having a hard time during my first clinical placement, and COVID-19 had first begun. I saw Deborah Gough from Bega’s Learning Support team. I did pretty badly in my first assessment and I didn’t think I had what it took to be there. But when I went to Deb, she helped me to understand academic writing and the marking rubric. My marks improved dramatically from then, but I still liked to talk to Deb when needed.

“The team at Bega: Sam, Amelia [Love] and Britt [Brown] were so supportive, and I always knew they had my back.”

Throughout her studies, Loureene was juggling her degree and her job with the challenges of being a single mother to two young boys.

It was, she says, incredibly hard at times.

But having many balls in the air did not stop Loureene from seizing every opportunity her degree offered, including a clinical placement in Cambodia. It was an experience she describes as “life-changing”.

“In 2019, I was selected as a UOW representative to go to Cambodia. It was the highlight of my life. I was based in rural clinics just outside of Siem Reap [in north-west Cambodia], and we spent our time delivering primary health care promotions to the Khmer community,” Loureene says.

“It really opened my eyes to how creative and amazing nurses can be, even when they are working with very few resources."

"It really opened my mind to what’s possible. The whole experience has inspired me to want to work in remote and Indigenous communities.”

The idea of giving back and making a difference in other people’s lives, is a major thread in Loureene’s life. However, she’s never ostentatious about it, but it is clear she is a naturally born leader who demonstrates authenticity and empathy.

Loureene volunteers with the Rural Fire Service, and in the summer of 2019-2020, as bushfires constantly threatened the town of Eden and the Far South Coast, she set up a community Facebook page with the aim of facilitating emergency information to those who needed shelter, food and supplies. 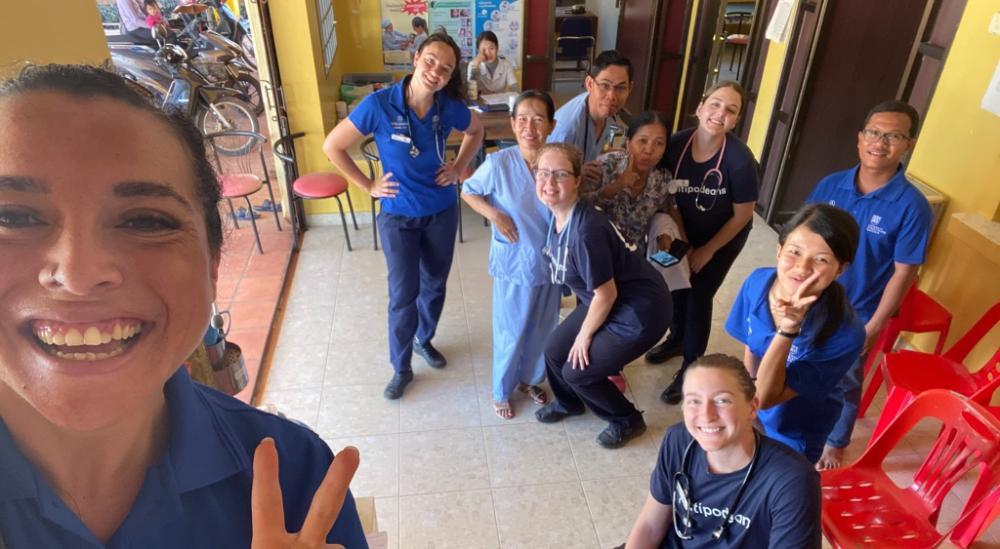 Loureene Kelly during her clinical placement in Cambodia. Photo: Supplied

In addition, she has held leadership positions with Student Nurses as Professionals (SNAP) and seeks out any opportunity to mentor other student nurses.

“I love empowering people,” Loureene says. “It’s incredibly empowering to use my experience to teach others, encourage them, and to help other students feel more confident and capable. I want to be a positive influence on their journey, so they don’t feel they should know everything when they start nursing, so they understand that’s it okay to ask questions.”

Throughout Loureene’s time at UOW Bega, and as she enters the workforce as a graduate nurse at Bega Hospital, she is most proud of is how she has, single-handedly, changed the narrative of what university means to her family.

“I feel strongly that everyone deserves to have options and that regional campuses, in particular, are vital for small communities,” Loureene says. “Where isolation and lower socio-economic demographics provide barriers to education, UOW regional campuses remove these barriers and give people like me a chance. 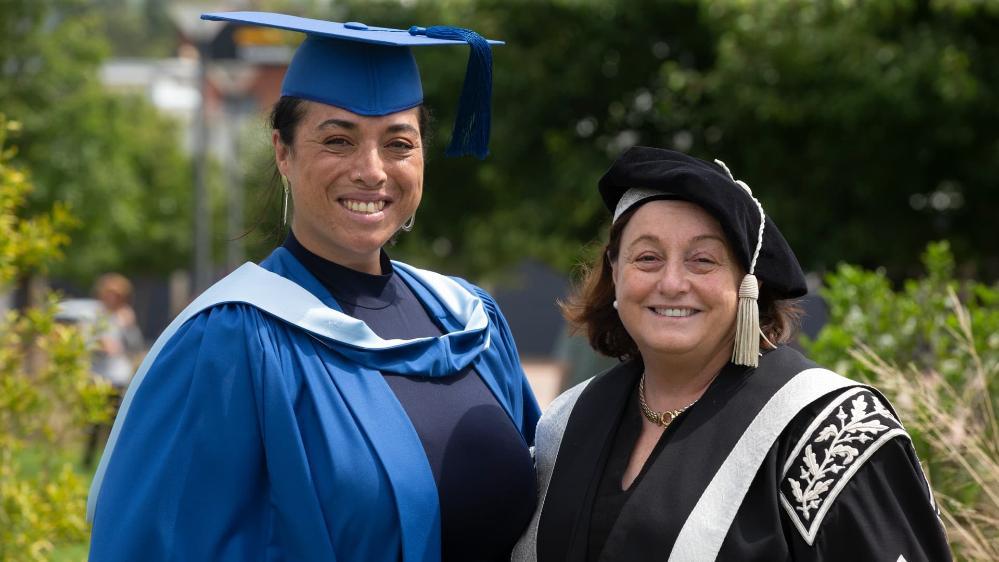 “When I started studying, I began to prepare my boys, telling them why I was doing this degree for me, but also for all of us. We have struggled in the past, and as much as I’ve tried to hide that struggle, they knew what was happening.

“Studying the Bachelor of Nursing has given me financial freedom, and I don’t take that for granted. But my boys have also seen me celebrating the wins and experiencing the lows, and they were there cheering me on when I needed the motivation to push through and get things done.