How UOW led students to an island paradise

Spending two weeks in the French Polynesian island of Tahiti sounds like a pipedream for most, but for a group of UOW students, it was just another day in the classroom.

The trip was funded by the New Colombo Plan, a federal government program that provides funding for short study programs in universities and research in the Pacific. Public health students worked alongside Professor Okely, who is a leading researcher in physical activity in children around the globe, while French students worked as translators.

Jessica O’Brien is a third-year Bachelor of Public Health student who took the trip as an extra credit subject.

“It was a pretty eye-opening experience,” she says.

Students got to see Professor Okely’s global research in action, visited the French Polynesian Ministry of Health, and learnt about local hospital systems.

“We went to an island called Mo’orea, and the hospital there is really innovative towards health promotion and public health. The hospital was different to Australia in that anyone can go there at any time, not just if you’re sick. Because currently there's a high rate of domestic violence on the island, lots of people go there just to hang out as a safe space.”

The two-week program was in partnership with the University of French Polynesia (UFP) where UOW students learnt French language and Polynesian culture and paired up with local students for a variety of cultural visits and activities.

“We learnt about history of Tahiti, the colonisation with France, their politics and culture. All the lessons were in French, so it was helpful to have the French students there with us,” says Jessica. 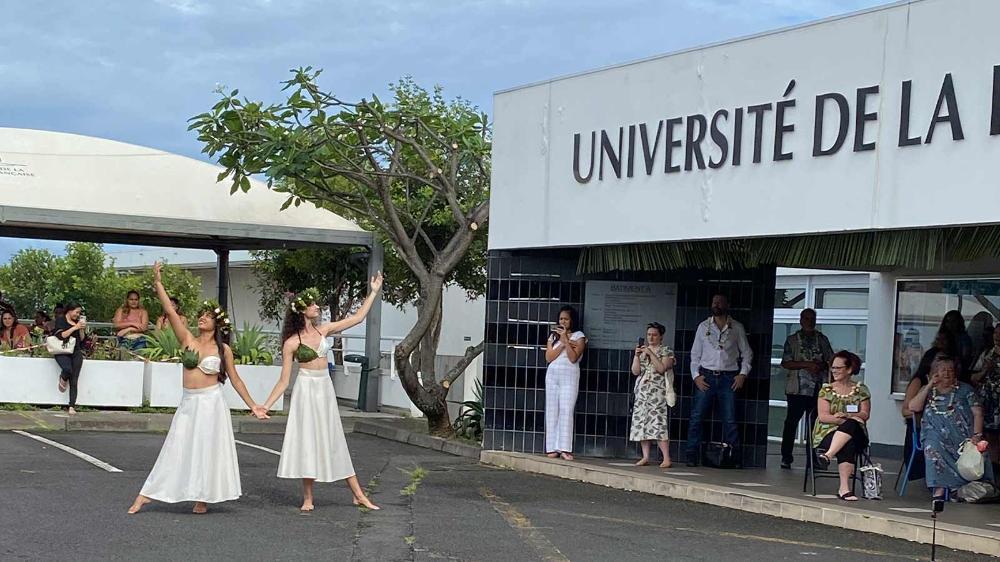 Students were greeted by a traditional Tahitian dance

Angela Lane, a third year Bachelor of International Studies - Bachelor of Laws student, has been studying French since high school and describes the trip as an invaluable experience.

“It was overwhelming and rewarding at the same time. Most of the locals spoke limited English which meant that I was forced to utilise my French which was great, because it meant that I didn’t fall into English when I was finding it difficult,” says Angela.

“It was incredibly gratifying hearing a conversation and understanding most of it or reading a menu or sign and realising I could read it without too much effort. That was exciting because although I was so overwhelmed, particularly with the speaking side of things, I felt like my studying was paying off and I could see it in action.”

Not only was there the opportunity for real-world research overseas, both students say they appreciated the chance to apply their language knowledge in context and study with people outside their own faculty.

“In my degree, you're in class with the same social sciences people, but the French students might be studying law or literature, so you get different perspectives,” says Jessica.

“We all worked together and it was cohesive and collaborative.”

Angela says it was interesting to hear about the studies of the public health students and see their work in action.

“It was a great opportunity to meet other students who I would not have otherwise met. It was also interesting learning about what they study and what career paths the other students wanted to pursue. It is quite easy to get caught up in your own degree if you are always surrounded by people who are studying the same thing as you,” says Angela.

“Talking to Sarah about her PhD studies and hearing about Tony’s work with the WHO was very interesting to me as I had never really known or understood the kinds of research that was being done, particularly with children’s health and physical activity in the Pacific.”

Jessica, who is set to graduate in 2023, says COVID-19 had affected the practicality of her degree, but this trip made up for that.

“Because of COVID, we haven’t been able to do as much implementation of public health in public settings and how it works in different countries, so to see the comparison to Australia was amazing,” she says.

As for Angela, she recommends students study a language and take advantage of cultural exchange opportunities.

“An international study trip gives you a chance to practice your language skills to further your development, and it’s important to expand your horizons as you never know what doors these opportunities may open,” she says.

“I also think it is important to experience what it is like to be a foreigner in another country and to be immersed in a different culture and way of life.” Stu