Environmental Innovation in Rural Australia: Where Art and Science Come Together 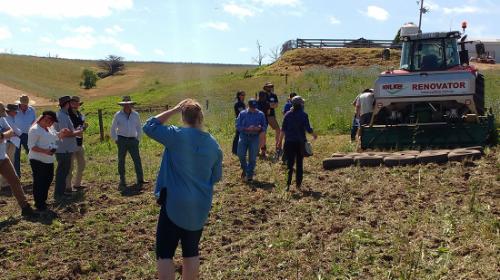 As Australian governments, organisations and youth look to tackle complex environmental issues in Australian agriculture, the voice of rural Australia is getting louder and louder.

Taking place in Bingara, a small town in the New England region of New South Wales around 7 hours north-west of Wollongong, “Groundswell” festival is bringing together academics, scientists, artists and farmers with a collective goal to educate the Australian community about new technologies and scientific methods coming from outside the nation’s urban centres. UOW academic and artist Dr Lucas Ihlein will take part in the ambitious series of public forums, discussions and art installations exploring well-worn issues such as climate change in new, and innovative ways.

As a practising artist, academic and founding member of the Kandos School of Cultural Adaptation, Dr Ihlein’s research has taken him all over Australia. For him, art is a way to explore history and culture; to bring social issues and innovation to new audiences, and influence change at both a community and policy level. Translating this passion into teaching, his visual arts students at UOW learn to appreciate and interpret interactions between humans and nature. Dr Ihlein’s major area of study concerns the sugarcane industry in Central Queensland, but has also led him to hosting informational sessions on the soil and carbon economy in regional Victoria, and collaborating with inventors and farmers in rural New South Wales to find and publicise exciting developments in regenerative agriculture.

The latter project, completed as part of The Kandos School’s two-year long initiative An Artist, A Farmer, and a Scientist walk into a bar... is a labour of love looking at the way in which artists, scientists and farmers can work together in tackling environmental issues such as climate change and unsustainable farming practices in positive ways. His major contribution to the project, ‘Baking Earth’, celebrated scientific invention as an art form by displaying inventor Allan Yeomans’ technology, ‘Yeomans’ Carbon Still’ in Monash University Museum of Art in early 2019. The Carbon Still allows farmers to measure the amount of carbon in their soil, and monitor the progress of ‘green’ initiatives over time. Yeomans has been recognised in scientific circles globally for his contribution to regenerative agriculture, and his collaboration with Ihlein has brought the technology to a whole new audience.

Dr Ihlein and Yeomans’ work will be showcased as a documentary screening and panel discussion at Groundswell. Dr Ihlein says the event aims to increase recognition of the work being done outside of Australia’s cities and coastal centres, to help communities gain a greater appreciation of the lived experiences of those tackling environmental issues in Australia’s rural centres.

An Artist, A Farmer, and A Scientist walk into a bar…