Two podcasts co-produced by the University of Wollongong’s Associate Professor Siobhan McHugh have received top honours in the New York Festival Radio Awards,  which has bestowed honours on the best audio storytelling from around the world since 1982.

Professor McHugh, a journalism lecturer in the School of the Arts, English and Media, was part of the team behind The Last Voyage of The Pong Su and Gertie’s Law, which each took out a Gold medal in their respective categories.

The Last Voyage of The Pong Su, created for The Age and Sydney Morning Herald, is an investigative podcast that tells the story of a North Korean dictator, bags of heroin, spooks, sailors, and a web of lies.

Professor McHugh was the Consulting Producer on The Last Voyage of The Pong Su, working alongside host and lead reporter Richard Baker, and fellow consultants and producers Rachael Dexter, Kate Cole-Adams, and Tom McKendrick.

The Last Voyage of The Pong Su won a Gold medal in the Narrative/Documentary Podcast category in the New York Festival Radio Awards.

Gertie’s Law, which received top honours in the category of Education Podcast, explores the people and processes behind the Supreme Court of Victoria.

Professor McHugh was consulting producer on Gertie’s Law, which takes an unprecedented look at the complexity and challenges of the justice system.

But the in-person celebrations will have to wait for the teams of both podcasts. The awards, usually held in New York, were handed out from afar as the coronavirus pandemic forces the creative community all over the world to stay home. 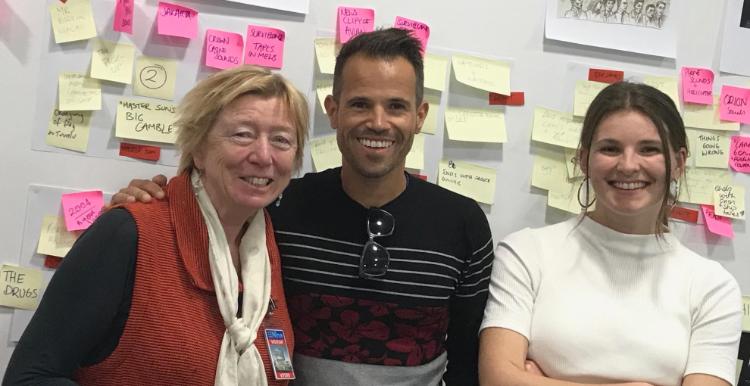 Associate Professor Siobhan McHugh (left) with host Richard Baker and executive producer Rachael Dexter at a production meeting for The Last Voyage of the Pong Su.

A veteran audio journalist and storyteller, Professor McHugh said she was thrilled to see the two podcasts recognised on an international stage.

“It is a real team effort to create podcasts of this calibre. This is the power of collaboration,” she said. “Gertie’s Law is a groundbreaking piece of work and gives listeners a never-before-heard insight into the inner workings of our justice system. It is a brave, fascinating concept.

“The Last Voyage of The Pong Su makes a trifecta of gold for The Age podcasts at the New York Festival. Phoebe’s Fall and Wrong Skin both received gold, and I was the consulting producer on all three.

“The core driver is Richard Baker’s astonishing investigative journalism. He is key to it all, but we all see and raise each other up. It is the best team I’ve ever worked with.

“It is so rewarding to see both the podcasts, and the teams behind them, get the recognition they deserve.”

Gertie’s Law is now being studied by UOW law students after it was set as a text in the School of Law by Associate Professor Cassandra Sharp.

It is the sixth time Professor McHugh has been recognised with Gold at the New York Festival Radio Awards, after two solo and four team wins in previous years.

The New York Festival Radio Awards, held annually, honour radio and audio content in all lengths and forms, created by stations, networks, and producers around the world.