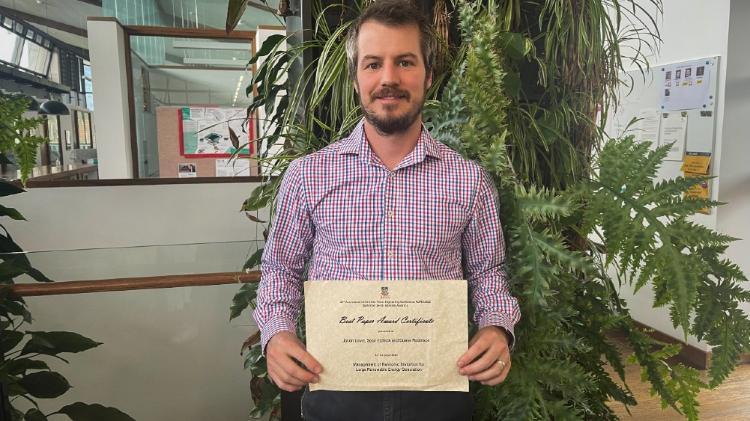 Jason David, Research Fellow at the Australian Power Quality and Reliability Centre (APQRC), was awarded best paper at the Australian Universities Power Engineering Conference (AUPEC), which took place at the University of Adelaide, September 26 - 28, 2022. His paper, Management of Harmonic Distortion for Large Renewable Energy Generation (REG), is a high-level review of a project undertaken by the APQRC in early 2022, co-authored by Sean Elphick and Duane Robinson, Research Coordinator and Technical Director for APQRC, respectively.

The focus of the project, supported by the Australian Renewable Energy Agency (ARENA), involved assessing the existing methodologies used by network service providers (NSPs) to maintain appropriate harmonic distortion levels. As outlined by Jason in the article, "power system harmonic distortion continues to be an area of concern for both network service providers (NSPs) and connected customers". So, his work provides an overview of the Impact and Management of Harmonic Distortion for Large Renewable Generators project led by the University of Wollongong and supported by ARENA. The paper reviews existing practices and identifies possible improvements and areas where efficiencies may be gained. This research aids in improving processes in the management of power system harmonics in Australia to benefit proponents of REG plants, network operators and ultimately, all connected consumers.

When asked how he felt about this achievement, Jason stated, "It is an honour to have my research recognised at AUPEC and hope that the findings lead to positive change throughout the industry".

We congratulate Jason on this fantastic achievement. This is the second time in three years that the APQRC has won the best paper prize at AUPEC. In 2020, we were awarded a prize for our paper, Design of a Battery Energy Storage System for Critical Infrastructure, authored by Ilija Babic, Sean Elphick, and Jonathan Knott in collaboration with Shoalhaven Water.

If you would like a copy of Jason’s article, please get in touch with the APQRC by emailing us at apqrc@uow.edu.au.