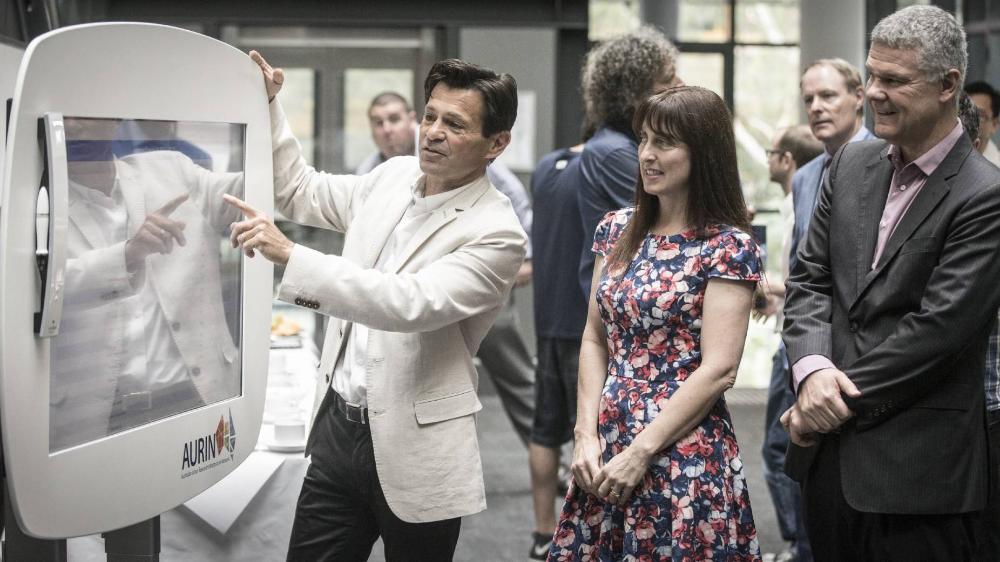 Although much has changed since SMART opened its doors in November 2011, the values and the energy of this unique place have remained remarkably consistent, writes William Verity.

After money became available in December 2008 for higher education projects following the global financial crisis, the University of Wollongong sent a delegation to Canberra.

The Dean of Engineering at the time, Professor Chris Cook, remembers that one of the team was a vivacious livewire undergraduate called Sarah-Ann Brennan.

“Normally, such a group would be made up of – mainly - older men in dark suits and ties advancing very serious arguments about why Wollongong and not one of the other many hopeful applicants,” he said.

“Nobody else would have included a student in that conventional lot.

“At a certain point in the interview she had an opening and given this chance she let the interviewers have it through both barrels.

“The whole lot came out articulately and unstoppably with her obvious enthusiasm and energy infecting everyone in the rather dour Canberra room.

“Brilliant!!!! Everyone was convinced. Job done! They almost signed the cheque on the spot.”

Although much has changed since that day in 2009, the values and sense of purpose that Brennan articulated, has not.

Tania Brown arrived in March of that year as the first appointment, chief operating officer. It is a position she still holds.

“Hire a director, build a website, a brochure and a budget. In three weeks.”

The brief was one that originally came out of research following the devastation wrecked by Hurricane Katrina on New Orleans.

What became obvious was the interconnection of infrastructure – when the power goes down, you can’t pump petrol; neither can you access cash from the ATM. All of which is critical infrastructure in an emergency, and in day-to-day situations.

This sense of exploring connection, the interstices of things, runs right through the DNA of SMART.

The rise of SMART was a collegial affair from inception.

“Even though Engineering was the lead, it was crucial for IT, Science, Commerce and Law to be part of the journey as well,” Brown said.

It has also always been as much about people as about data.

The original vision was to have 200 doctoral candidates from those five faculties in the building (SMART opened with 117 and scaled up), and to sit them next to each other.

“We made engineers sit with IT people and commerce students sit with law students,” Brown said.

“The whole idea is to be excited by what’s going on around you and to have a multi-disciplinary team approach.”

The next key appointment was Professor (now Senior Professor) Pascal Perez, who came on board as Professor of Infrastructure Modelling in January 2011, and appointed Director in 2016.

An agricultural engineer by training, he first thought that the head-hunter got the wrong person for the job.

“However, the head-hunter swiftly reassured me, saying that UOW had the best engineering researchers in Australia; they needed someone to lead the team who could understand end-user behaviour and social responses to infrastructure planning,” Perez said.

“We were leading something that had never been done in Australia before, a unicorn aiming at developing a holistic and coherent vision across all infrastructure systems and services.”

His challenge (and opportunity) was to build a bridge between academic research and demand from industry without simply repeating past economic successes.

“The story of SMART is to create a bridge between the traditional public research which is mainly focused on Australian Research Council funding and the world out there,” he said.

“As director, I need to keep our research portfolio innovative and sustainable at the same time; we have to develop cutting edge applications while responding to market demand without repeating the same old solutions”

“It can be hard to keep it on the straight line.

“In reality, I need to have rapid access to relevant technical capabilities and domain expertise to respond efficiently to demand while juggling with fixed-term contracts and teaching commitments.”

A significant milestone for SMART was the foundation of the Digital Living Lab in 2015.

The Lab coordinated the design, deployment and management of an open and free-to-air network of LoRaWAN gateways across the entire Illawarra region, paving the way for smart monitoring applications and supporting the regional digital strategy.

To date, it is the only example in Australia of a university funding and sharing an infrastructure network for the benefit of all regional stakeholders.

For Phil Davies, Chair of the SMART Advisory Council, this ability to accurately measure the effectiveness of infrastructure is key to SMART’s success over the next decade.

“Often our greatest challenge in optimising assets is around access to data,” he said.

“What SMART has done off the back of IoT, sensors and devices is to collect data in the field that can then be used in the modelling to show what’s actually happening.

“It’s been very much an applied learning – or translational research – approach.

“That’s been a pragmatic and practical way forward.

“The other focus has been on end users, network managers.

“All too often we focus on the infrastructure itself, but SMART focuses on the network managers.”

With $250 billion committed to infrastructure over the next four years, it would appear to be an excellent space to occupy.

Couple that with the most challenging period in living memory for universities, and the model of mixed industry and public funding and the original vision of SMART looks prescient.

“The SMART Infrastructure Facility occupies a very special place in the University of Wollongong.

“When we watched the building and staff come together 10 years ago, there was nothing like it in any Australian university.

“At the heart of its vision are a partnership between cutting edge academic research and the needs of industry.

“It has successfully walked the fine line between keeping the research fresh and innovative, while at the same time, building on its strengths to offer competitive advantage to businesses from start-ups through to state government corporations.

“SMART is a wonderful example of the energy to break new ground and create value where none existed before, that exists throughout the University.

“It will be fascinating to see what the next 10 years will bring. Happy Anniversary.”