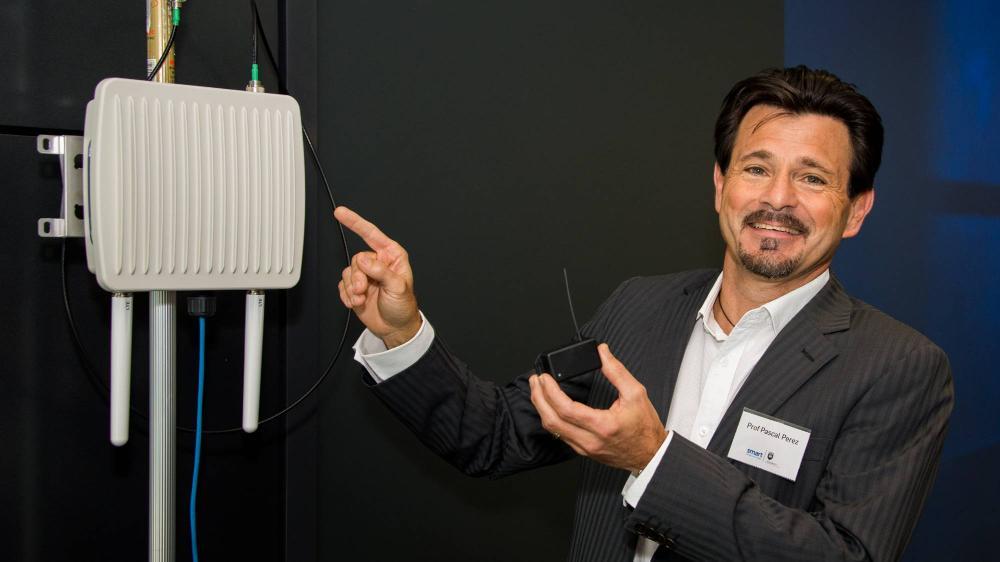 At the core of SMART’s vision has always been a desire to foster relationships with industry partners to create research that makes a difference in the world.

The latest example of this was a Telstra-UOW Hub for AIOT Solutions, announced last month.

“The hub provides the Illawarra and Australia with a unique chance to move from early adopters to leading innovators in the AIOT space,” he said.

The initiative is the logical next step in series of industry collaborations that stretch right back to the birth of SMART in 2011.

While SMART focuses on three main industry sectors – transport, water and energy – it does so through gathering data, and then using that data to predict outcomes through modelling.

Perhaps no project does this more ambitiously than Vision Illawarra.

The project was founded in 2013 by researcher Dr Rohan Wickramsuriya to meet a need for more integrated approaches to local and regional planning.

Data gathering is through a web-based regional dashboard using information supplied by the Australian Bureau of Statistics, Remondis, Endeavour Energy and Sydney Water.

Vision Illawarra is the first – and so far the only – project of its type in Australia (it has since gone national), in part because it’s so hard to establish those relationships with data providers and obtain an on-going data feed.

People and relationships – another SMART strength.

But no history of SMART over its first 10 years would be complete without a shout-out to Dr Johan Barthelemy and his role in creating the Digital Living Lab.

The Belgium-born researcher first heard about the Internet of Things (IoT) when he worked with the PetaJakarta project using Twitter to predict floods in Jakarta.

Before long, he had built a sensor to track his car.

“From there, I started looking into ways to add artificial intelligence into sensors,” he said.

The Digital Living Lab is an open, free-to-air platform, accessible to the entire community to use for research and to test new ideas.

It uses low bandwidth, low power technology called LoRaWAN to create a wireless network for sensors used – for no cost – by entrepreneurs in the Illawarra.

So among the burgeoning uses are a shark app developed by a Gerringong schoolboy, sensors attached to beer kegs to track the location and freshness of craft beer, and a map to allow firefighters to find hydrants quickly and in low visibility.

The Digital Living Lab has won a number of awards (including Best Community Initiative at the 2018 Committee for Sydney Smart City Awards) and acted as the springboard for a collaboration with Liverpool City Council to track pedestrian traffic in its CBD.

That too, won an award.

Transport has been an important pillar of SMART’s research, especially rail transport and a fruitful partnership with RailCorp and Transport for NSW.

But perhaps the most public and regionally important contribution has been the work done for the Illawarra Business Chamber to crunch the data on a second rail connection to Sydney.

The report called for urgent action to address the doubling of commuter traffic, and a massive increase in freight movements between the Illawarra and Sydney by 2041.

The study – published in 2017 with a follow-up in 2020 – showed the cost would be $1.6 billion, compared to $2 billion for an intense upgrade to the existing South Coast line.

It’s a history that Professor Perez is proud of, but not one where there is room for complacency.

“The challenge is to keep it cutting edge,” he says.

“If you’re not careful, you can fall into doing the same things again and again.

“It’s about keeping the balance between delivering projects to industry, and to continue to push the boundaries of what we know, and what we can do.”

CMRP researchers meet with Minister of Health for French Polynesia UOW shines in engineering, nursing in global subject rankings The Australian Research Council commits $5 million to establish UOW centre for training and research into the future of mining equipment
Close